In this section of our guide to the PS5 console you can find a comparison of the technical parameters of PS4, PS4 Pro and PS5 consoles, as well as an answer to the question of whether it is worth switching to PS5 from PS4 or PS4 Pro right away.

The launch of the 9th generation consoles is rapidly approaching and without any doubt will be one of the most important events of this year in the gaming industry. At the time of writing this guide (August 2020), the official price of the PS5 has not been revealed yet, but it is sure to be a key factor that will influence the buying decision of players. Below, we'll try to answer the question: should PS4 or PS4 Pro owners switch to newer hardware immediately after its release? 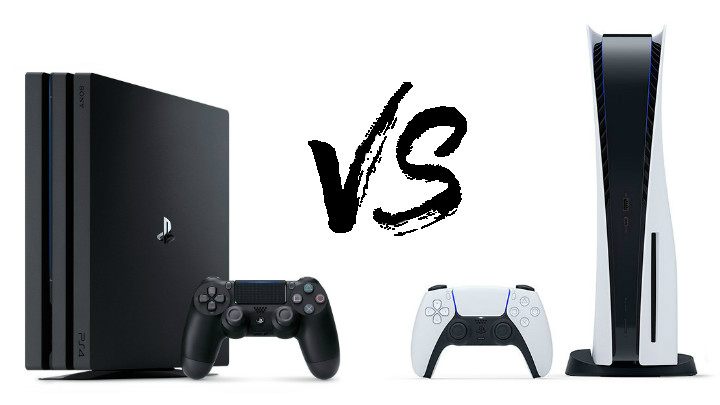 The PS5 will undoubtedly be a revolutionary device - Sony's strongest and fastest console to date. To find out about it, just take a quick look at the following list of the console specs of this manufacturer.

In addition to a much faster processor based on new technology, the PS5 gains a huge advantage over its predecessors when we compare the GPUs. It is worth explaining here what the mysterious teraflops, that appear at the GPU specification, actually are. Most simply, teraflops are floating point operations per second, that are a measure of computer performance, useful in fields of scientific computations that require floating-point calculations. It tells us how many complex operations can be computed by the console per second. By analyzing the GPUs of these consoles, we can conclude that the GPU of the PS5 is about 2.5 times powerful than the PS4 Pro and as much as 8 times stronger than a regular PS4 - faster and more efficient. Sony's new console is also winning in the duel over the amount of RAM and its speed - the PS5 will have twice as much of it as the PS4 and PS4 Pro.

Another big advantage of the PS5 will be the extremely fast SSD. It will significantly reduce the loading time of games, as well as completely eliminate the problem of moving between different locations during gameplay. The PS5 also has a much better optical drive (UHD Blu-ray). Of course, there will also be a digital edition of the platform available, that is, a drive-less version of PS5.

The PS5 is supposed to support 8K resolution, but that doesn't mean you'll be able to play games at that resolution in the upcoming years - it's a very distant vision of the future. Sony's new console will support 120Hz refresh rate, which is undoubtedly a great advantage, as there are already many TVs on the market that support 4k resolution and higher refresh rates.

PS4 or PS4 Pro owners certainly have a sizable library of games on discs or on their PSN account that they wouldn't want to lose when switching to new hardware. Sony's new console will have backwards compatibility which means that players will be able to run all PS4 titles on the PS5. However, it's worth taking a look at some of the most interesting upcoming titles that have been announced for the PS5 and won't be available on the PS4:

We've only listed some of the titles that have been officially announced for the PS5, but we expect to see a lot more of them in the future - how soon? That, unfortunately, is still unknown. If you want to play any of the above titles you will of course have to buy a PS5.

PS4 vs PS5 - is it worth to switch from older platform to newer one?

The first months after the launch of new consoles are usually a period in which developers are trying to optimize the power of new hardware. There are a few exclusive titles on the market dedicated only to the next generation of consoles, and the vast majority of good games are intergenerational titles, which are also available on previous versions of the consoles. The price is usually them main factor that determines whether players will want to buy the new platform right away after its release - so far, as we can tell, the price of PS5 is not going to be lower than that of PS4 ($399.99). Some online rumors say that the PS5 could cost as much as $500. It should be noted here that there will be two versions of the PS5 console on the market: with and without the built-in UHD Blu-ray optical drive. So, we may assume that the digital edition may be a bit cheaper.

The price of video games is the second factor that may affect the decision of players whether they will want to buy a new hardware. The video games for next-generation consoles in the standard edition could cost around $70 USD, according to some rumors. Many people are not pleased with these forecasts, cause this is a lot of money, even for a digital edition.

So the question remains - is it worth switching to the PS5 right away? If you own a PS4 Pro or even a regular version of this console and you still have a lot of titles to complete or games that you want to play (and you're not feeling excited about playing the upcoming exclusives), then don't rush it and don't buy a PS5 at the moment of its release. In such a case, many phenomenal PS4 games will offer your hundreds of hours of pure fun.