From this chapter of our guide to the PS5 console you can find out how big is the new device developed by Sony and how it looks like in comparison to its predecessor - PS4.

After the official presentation of the PS5 console, you probably could find a lot of interesting information and assumptions about the size of the next generation console over the Internet. There have been many comments on many forums that the PS5 is a gigantic device and looks like a tower or another type of futuristic building. The PS5 is not only higher to its PS4 predecessor, but its also bigger then its direct competitor, that is, the Xbox Series X.

As soon as Sony officially unveiled its new PS5 console, many online detectives began to calculate its size and compare it to the manufacturer's current generation of consoles, the PS4 and PS4 Pro. In order to better represent the height differences between these devices we have prepared special graphics. 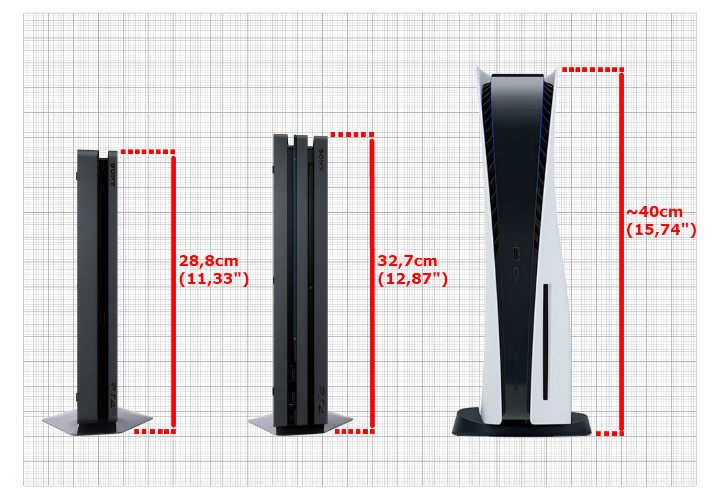 Size and height comparison of PS4, PS4 Pro and PS5

The PS4 in its basic version (first from left) is 28.8 cm high, while the PS4 Pro version (middle) is slightly taller as it measures 32.7 cm. Unfortunately, Sony hasn't revealed the exact dimensions of the PS5 platform yet. By looking at the photos, of which there is plenty on the Internet, you can conclude that the height of the latest Sony PS5 console can reach up to about 40cm. For comparison, we will add that the Xbox Series X has only about 30cm. But size doesn't matter, does it?

Why is the PS5 console so large?

Many people interested in buying a PS5 are surely wondering why this console is so big. The size of the PS5 may also come as a surprise given the fact that over the years we have become used to the Slim versions of our favorite devices, which don't take up that much space and look decent. Matt MacLaurin, executive vice president of PlayStation UX Design addressed that issue on LinkedIn and explained that the size of the PS5 is due to its enormous computing power, and therefore the device needs a lot of space to dissipate the heat.