This is an APC event. The problem is, the enemy will send also some APCs against you. Don't forget that they have rocket launchers as well as you, and they're eager to use them. You don't want your vehicle destroyed before the time runs out, right? In order to make things easier for you, drive into an alley leading through the park. Thanks to that you'll avoid attacks from behind and eliminating hostiles will become so much simpler. 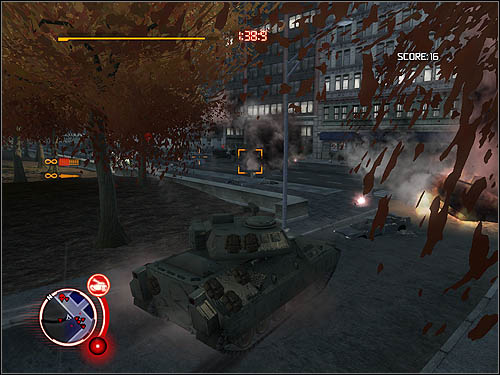 Now it's time to use the grenade launcher. Your enemies are the infected people of New York. The enemies are fast, so they're able to get close to you. That means if you shoot them with a grenade, the blast will also hurt you. Here's a tip - jumps a lot. In order to get plenty of points, aim at large groups of hostiles. Moreover, remember about changing your targets manually. The game has this flaw - the lock on system works also with enemies already blown up. 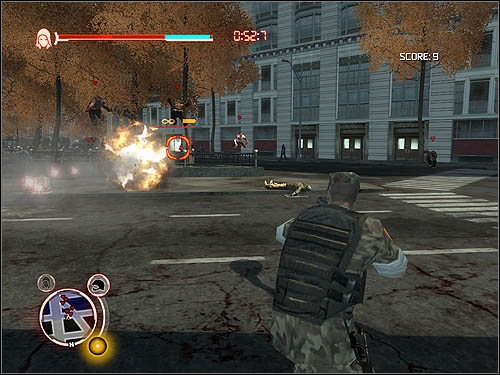 Time for tank. In order to get the gold, visit a few military bases first. You'll find there some tank drivers - consuming them enhances Mercer's driving skills. Use your main gun as well as the machine gun - thanks to that you'll be able to effectively eliminate both armored vehicles and the infantry. Of course concentrate on those enemies, who have red markers above.

Here you must eliminate enemy troops with a grenade launcher. Make sure you have full health and jump into the action. At first attack the infantry - well, there are no other targets anyway. Later a helicopter and some APCs will join the action. You'll get more points for these enemies, so focus on them and leave alone the rest of hostiles. They'll have all guns pointed at you, so don't forget about collecting life orbs left by killed enemies.

Use the helicopter to eliminate an awful lot of mutants. Gain a great altitude, so the enemies will not be able to hit you with cars or something like that. What is more, note the tentacles coming from the ground - killing them is worth many points. Use both main gun and rockets to easily eliminate all kinds of enemies you may encounter here. You can also consume a few pilots in order to improve your flying skills.

In this event you will have to use a tank. Try moving around the place all the time (but don't fall into the water) and don't let the enemies come very close to you. Otherwise you won't be able to aim at them. Bigger enemies can be eliminated with your main gun, attack smaller with the machine gun (if their next to a wall, use your main gun as well. They won't get a direct hit, but the explosion should help you get rid of them).

It is time to use the blade. In order to get the bronze and silver medals, you'll need only your basic attack - eliminate the infantry and, if possible, try to avoid tank projectiles. If you already have the Blade Air Slice ability, you can easily get the gold by attack only the tanks. One Blade Air Slice attack should blow up a vehicle into smithereens, giving a lot of bonus Evolution Points. 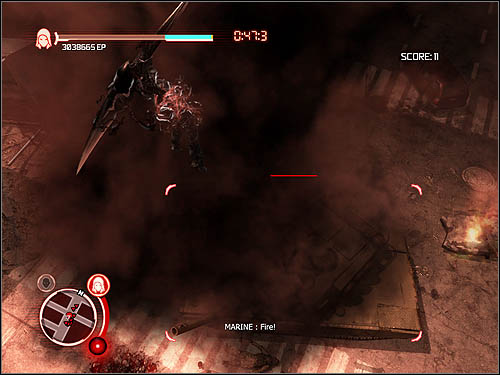 You'll need a lot of health in this one, as there will be a lot enemy helicopters... with all their guns pointing at you. Run as much as possible and collect all the life orbs that fall out of destroyed vehicles and - hopefully! - land on your skyscraper's rooftop. If you want to get the gold, upgrade your health and enhance your rocket launcher usage abilities. When you notice you can destroy a helicopter by firing a single homing missile, try getting the gold medal in this event.

Quite difficult thing to do, requires unbelievable health and going down to the streets, which takes some time. I advise you to do this after acquiring the Hammerfist Elbow Slam upgrade - thanks to it, you'll be able to destroy tanks without much problem. There are lots of tanks in this event, so you might want to use that ability. However, do not concentrate on tanks only - fight also groups of infantry to get the gold.