When you kill your enemies, complete missions, find hidden objects (Hints, Landmarks) located on the Manhattan Island, you get more and more Evolution Points. You can spend them on new upgrades, thanks to which Alex Mercer can become an ultimate killing machine. Below, you can find a list of abilities you should pay attention to.

Weapons that can prove useful in almost every fight. Although there are many powers available, I advise you to focus on three of them.

Blade - excellent weapon against whole crowds of people. In connection with the Blade Air Slice ability, you can use it to fight infected Hunters, supersoldiers and tanks with great efficiency. However, there are two problems with the blade. First of all, you gain access to it very late, and secondly - upgrades cost A LOT of points.

Claws - the first power you gain access to. Maybe it is not as good as the blade, but it will surely make a few things easier, especially when you get yourself the Groundspike ability.

Hammerfists - nice weapon against a group of enemies standing next to each other. It not only damages, but also knocks down on the ground and stuns your enemies. What is more, in connection with other powers (like Hammerfist Elbow Slam) it becomes a great weapon in your fights against armored vehicles and tanks.

I personally think you should avoid buying the Thermal Vision Power. In my humble opinion better avoid also the Shield ability - I prefer to fight my enemies by using acrobatic skills and the Shield practically makes you unable to do a few things in air. Spend your points on Muclemass upgrades if you like to fight with your bare hands or throw various objects at them. 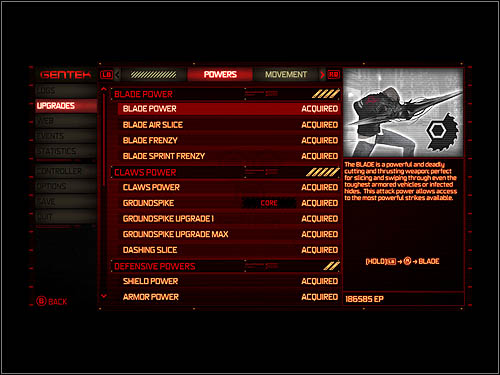 If you want to perform some acrobatic moves while you fight, then the Movement upgrades are very important to you. First of all, take a look at the first section connected with flying (Air Upgrades) - Airdash and Glide abilities unlock extra attack moves, like the Bulletdive Drop. What is more, upgrades connected with the movement are extremely necessary if you want to perform some Movement events and get a few gold medals. 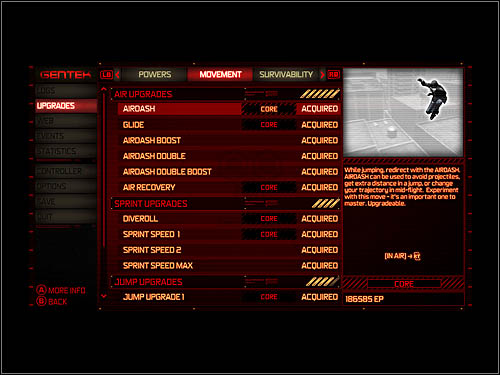 I believe that all upgrades connected with Mercer's health are worth their prices. Now I'd like to point two of them, which should be bought as soon as possible.

Critical Mass Ability allows you to perform devastator attacks. These are the most powerful moves Mercer can do in the whole game. It is basically impossible to beat the game without them. When you get more than 100% of Mercer's health, he enters the Critical Mass mode and enables the devastators. Try to guy this ability when you plan on unlocking your first devastator. This ability can be upgraded - on the highest level Alex can perform three devastator attacks, one right after another.

The other utterly important upgrade is Adrenaline Surge. Thanks to this one, Alex is able to unleash one devastator attacks when he has very little health. It is quite useful, when you need something that can save you from dying. 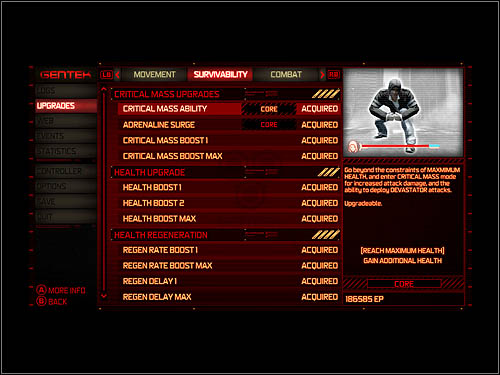 The most important part of upgrades, as all the devastators are here. Let's say a few words about ach of them.

Groundspike Graveyard Devastator - area attacks, it's all about perforating enemies nearby, with the use of spikes coming straight from the ground.

Tendril Barrage Devastator - slightly more expensive then the one described above, works in a very similar way - tentacles coming out of Mercer's body eliminate everything standing close to him.

Critical Pain Devastator - the only devastators that is not an area attack. Is as all about sending an energy beam in the chosen direction. It takes an awful lot of health, but on the other hand it damages very few enemies. Available after buying the Palm Slap ability.

All these attacks have also their air equivalents. Pay attention to them if you like to combine your hits with jumps. Devastators are extremely useful while fighting large groups of strong enemies (huge mutants, supersoldiers) and in boss battles.

And what about other important upgrades in the Combat list? The Flying Kick Boost is surely worth its price. This hit is not only useful during a normal fight (especially at the beginning of the game), but also makes hijacking enemy helicopters a lot easier. Moreover, I found the Hunter Dirtnap ability very useful. It allows you to temporarily stun Hunters and other big mutants. 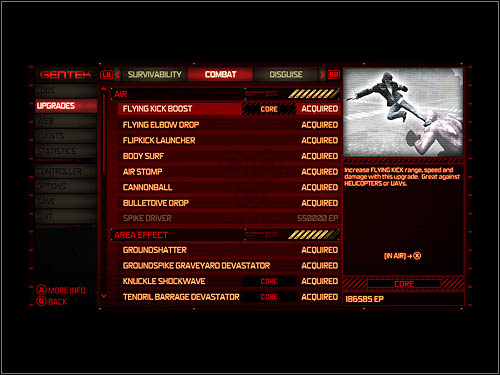 Here, you can spend your Evolution Points only on abilities from the first section, called Consume. The basic skill of absorbing enemies is free. Take a closer look at the Stealth Consume instead - thanks to this one, you can absorb your enemies without raising the alarm. This ability is extremely useful each time you plan on infiltrating a military base.

The Artillery Strike ability can be obtained only when you infiltrate an enemy base and consume a soldier able to call in the barrage. During the game, visit a few military camps and consume some army guys not only to obtain, but also to upgrade your artillery strikes. Remember that you can use them only in a military disguise.

The Patsy ability should be treated like an additional, funny thing, not like a serious ability, allowing you to fight the army. 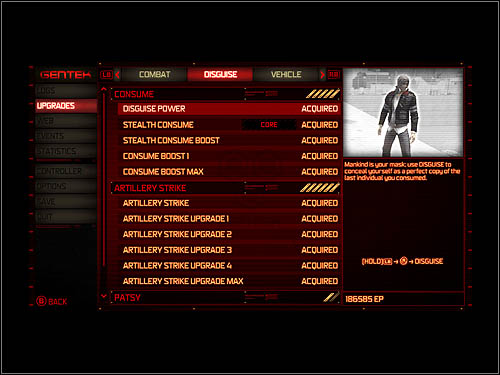 Your vehicle abilities can be improved only by consuming military drivers and pilots. Acquiring your basic skills is a natural part of the game, so you'll gain them when you make some progress. In order to improve then, you have to visit military bases and consume more pilots and drivers. I advise you to spend some time on absorbing these guys, as the heavy machinery is usually very useful in destroying hives, bases and Strike Teams - and you get a lot of bonus evolution points for that! 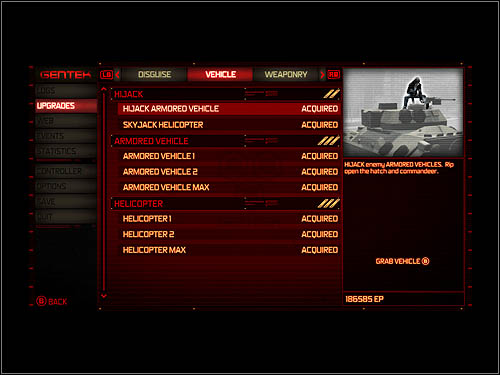 These abilities, like the ones connected with operating vehicles, can be acquired by consuming soldiers. Core skills are granted from the beginning of the game, but in order to enhance them, you must absorb a few military guys, who know very well how to handle a gun. You'll find them all in military bases.

Mercer himself is a nice killing machine, so these upgrades are useful only if you plan on using firearms often. Actually, some events in the game require it. 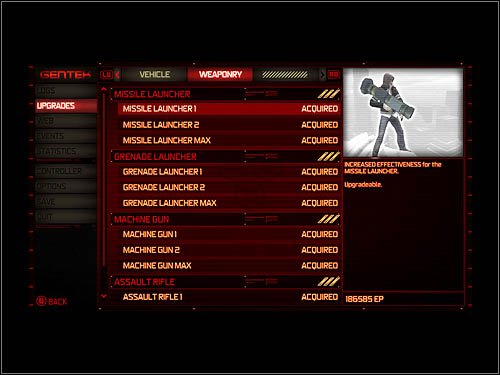