Absorbing military targets is divided into three types. First one is based on consuming people, who might know something about the virus and Mercer's history (the Web of Intrigue targets). Amount of these guys varies, depending on the difficulty level. You've got them all marked on the map, the radar always shows you the location of the closest one. Absorb guys one after another, running away from the military who may catch you red-handed. The timer at the top of the screen informs you, how much time you've got to consume the remaining targets. 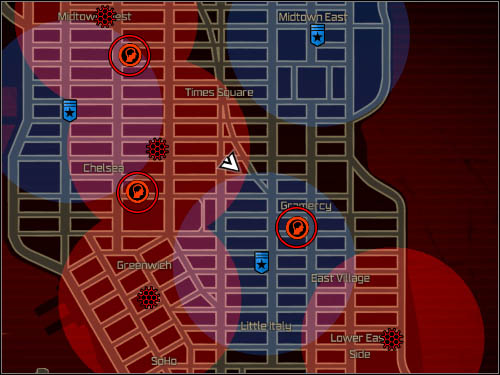 Scientist Hunt is the second type of Military Consume Events. Here's what you have to do - get to a group of eggheads (always wearing their biohazard suits, so you should have no trouble recognizing them) collecting samples for their tests. The time is limited, so you must hurry. Scientists always have some guards near them, but you don't have to worry about them, unless you don't have a military disguise. You have to kill the soldiers and absorb the scientists. Let's start with the army guys. Use your Patsy ability to accuse them of being infected, so they'll simply shoot at each other. Consume the last defender. Without guards, the scientists are totally powerless. Consume them silently or blow your cover and show everyone who's the boss around here - without the military personnel nothing will stand in your way.

Once you complete all Scientist Hunt events, you'll receive a small side mission based on finding Karen Parker. No big deal, just walk into the marker shown on your map and radar. 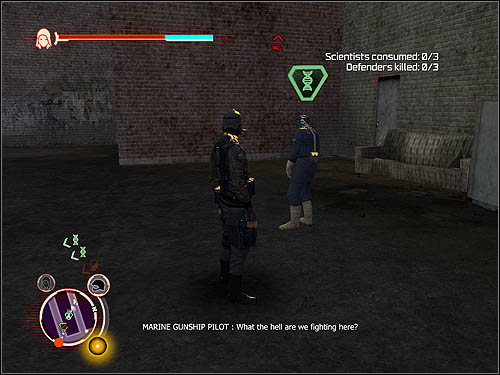 Third and the last type of military events is Base Infiltration. Well, the name says everything - it's all about infiltrating military bases. Consume a soldier and shapeshift into him, so you'll be able to visit an army compound without raising the alarm. In the compound, you must locate and absorb the base commander (guys with shades and rolled up sleeves). Later in the game, bases are filled with virus detectors, so you probably won't be able to use your Stealth Consume ability. Therefore, I advise you to simply run into the compound, consume the commander and then run away from there, getting out of enemies' sights (and this usually includes the Strike Team). Once you do it, shapeshift into the commander and return to the base. The enemies won't recognize you, and you will gain full access to the base. You have three (or less) minutes to do all these things (time limit depends on the difficulty level).

Quickly enter the base (virus detectors can still recognize you). At this moment, the time limit turns off, so you can rest a little. There are no detectors inside the building, so you can freely walk around the place and check all soldiers' locations and their patrol routes. In the base, you will always find at least one guy you have to consume. Try consuming them all without much noise. Some of these guys may even know something about the whole plot (Web of Intrigue Targets).

Once you absorb the soldier with a DNA icon above his head, look at the top right hand corner of your screen. You should notice signs pictured below.

They mean you can now leave the base. This will end the whole event successfully.

This type of event is one of the easiest. You simply have to blow up the marked military base. I advise you to shapeshift into a soldier, go to that base and then use enemy tanks to destroy the base's main building. You'll surely unleash hell by doing so - other tanks and helicopter will come to destroy you. Once they blow up your machine, simply get yourself a new one and finish your job in that base. Do not shoot at the enemies, focus on the building, as the time to do this whole event is always limited. 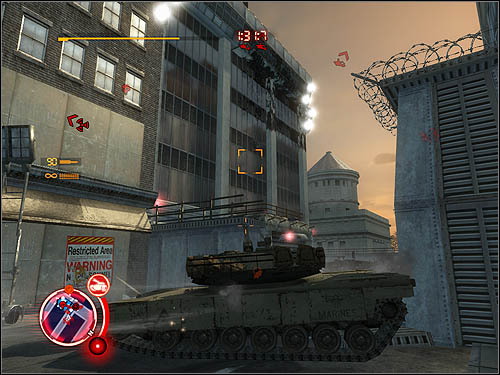 Some events are based on destroying infected hives. In order to do it quickly, hijack a tank or a helicopter (that second option is better, as the mutants are not so good at attacking flying objects) and then shoot several projectiles at the target. Yes, it's that simple! 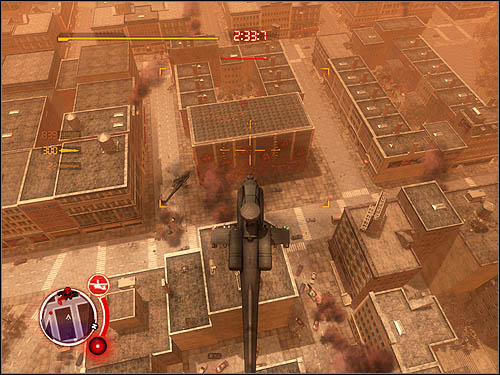