In the materials in the lower menu (screen above) there are two types of elements: walls and materials placed on the floor/ground. Both can get dirty, but it doesn't influence the gameplay in any way. In order to clean a dirty wall or floor, you have to use the Janitor or have the prisoners clean the prison (see: Deployment and Bureaucracy).

Walls are an important element, as they limit the freedom of prisoners. If you don't lock them in a specially prepared cell (with no holes and locked using a special Jail Door), they will quickly escape. 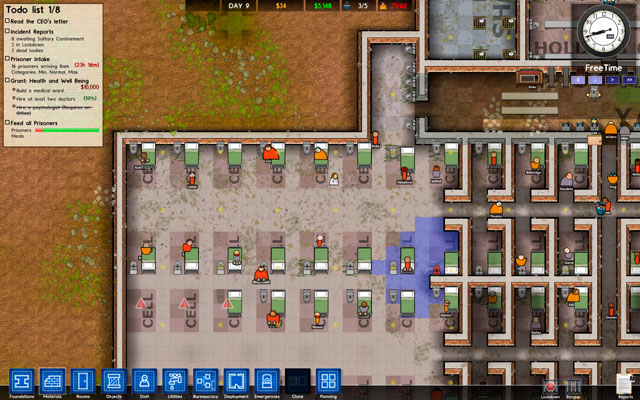 Walls also come useful when you want to separate given rooms, however - what's quite curious - they aren't needed in all cases. As you can see in the above screenshot, you can create cells (and all kinds of different rooms) without walls, as long as you create them inside a separate building. Such a solution is very economical, however it looks really stupid.

Walls can be destroyed by Workmen when you wish (demolish walls) or angry prisoners during riots. In the second case, you have to make sure no one escapes the prison, which can be done by building a free fence around the main building.

Below you can find a list of various types of walls. It's not really long, but it will probably grow with upcoming patches.

Floors, unlike walls, serve mainly a decorative role. They can either increase or lower walk speed, but it doesn't really matter that much as most characters will move with a speed appropriate to a given task. Note that the default speed in rooms is High (concrete floor).

This site is not associated with and/or endorsed by the or Introversion Software. All logos and images are copyrighted by their respective owners.