You obtain the access to the map after finishing the Prologue. The map is divided into five main spheres. Four of them consist of six smaller locations. The temple and adjacent corridors form the fifth sphere.

At the beginning you have the opportunity to heal only the first locations of every sphere. You can reach it directly by using the corridor which is connected to the temple. You can travel throughout the whole map. However, if you want to heal it, you have to possess a particular type of power. 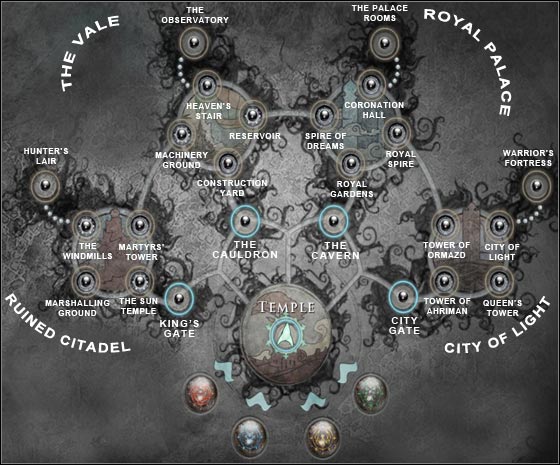 Every type of power requires obtaining a certain number of Light Seeds. However, you are the one who decides which Ormazd's ability will be learnt first, second etc. The order is not at all important when it comes to the game itself. Simply, until you learn a particular power, you won't be able to heal some areas. Prince of Persia offers full freedom and you are the one who decides where to go. Four first locations are an exception because there is a direct connection to the temple via the corridors. You should take care of them in the first place because it will allow you to collect a proper quantity of Light Seeds which are necessary to acquire the first type of power.

After finding a specific number of Light Seeds, teleport from the temple and stand in one of few colourful circles which are situated at the foot of the stairs. Start pushing the proper key rhythmically. After a moment you will be transferred to a brief self-study book which will enable you to learn about the capabilities of every kind of power.