The guide for Prey contains all information necessary to complete the game and discover the most interesting of its secrets. The initial chapters of this guide offer various kinds of useful tips. They cover combat, exploration, and crafting, among other topics. Separate pages include the list of all achievements, answers to the frequently asked questions, and suggestions concerning the best character development paths (recommended neuromods and psionic abilities).

The biggest part of this guide is the walkthrough which covers main story missions as well as optional side quests. Descriptions of individual quests include their objectives and hints regarding reaching the quest areas and how to efficiently eliminate or avoid enemies. The further sections of the guide detail the locations of all hidden items, including neuromods, weapon enhancements, suit kits, Psychoscope kits, keycards, and crafting plans. The guide informs in detail where all secrets can be found and, in the case of the ones that are difficult to find, is enriched with pictures whenever necessary.

Prey is a first-person science fiction action game. The player is taken to the year 2032 to investigate the Talos 1 space station which is overrun by hostile aliens. The game puts great emphasis on freedom of exploration of the available areas. It serves not only as a means to avoid or to better prepare for combat but also to find items that prove useful to survive. 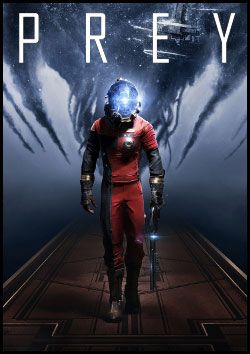 Prey for PC / Windows is a shooter with features of psychological horror, created by Arkane Stydios, the creators of Dishonored. The project is a sort of a reboot of the game with the same title that was released in 2006. However, the new game has very little in common with the original and both titles share only the genre (FPS), the presence of aliens and the name.
The action of the game takes place in the open world of an exhausted planet Exodus where, after years, the protagonist works as a bounty hunter. The gameplay mechanics were greatly changed. The title introduces platform elements (jumping, climbing up ledges) and the possibility to hide behind covers. Various weapons can be additionally upgraded and modified. Visuals of the game are generated by greatly improved id Tech 4 engine known from the original game.