The Pokemon Quest Game Guide contains a set of useful tips that will help you during the game. This guide will help you with fighting, training and developing the pokemon. We've broken down combat, ways to level up quickly and win easily. We've also prepared a chapter in which we examine every level available in the game, in order to let you know what you can expect.

We also made sure to help you begin the game without bigger problems. We've created a list of starting tips, and a comprehensive analysis of the interface, so that you're able to navigate it comfortably, knowing where to look for what.

The guide also contains information regarding character development. We've broken down the character progression and ways to obtain new heroes. This will allow you to control the team easily and effectively, coming out on top of any fight.

Pokemon Quest in a nutshell

Pokemon Quest was released for Android, iOS and Nintendo Switch. The game requires the player to expand their roster and take the pokemon to expeditions, where the player fights with enemies and obtains new upgrades and items. Character development is vital in this game - you have to constantly keep your eye on upgrades and the development of your companions. The game was developed by The Pokemon Company.

Pokemon Quest isn't overly complicated, but some of its elements are rather unintuitive. This prompted us to assemble a list of starting tips that will help you hit the ground running with this game.

Don't let the pot be empty - In Pokemon Quest, you obtain new heroes by cooking meals in the pot - the process takes 2/7 of an expedition. You should always leave the food brewing so that new pokemon appear quickly.

Remember about development - you get new items and points in every expedition. You have to constantly keep your eye on your characters; why does anyone need +40 HP, if they can get +200 from an item. These things are, however, easy to overlook, so make a habit of checking whether there's something interesting in the inventory.

Don't keep upgrades on unused pokemon - if you're changing your team, you have to strip the old characters of all enhancements - otherwise, you'll lose them.

Train your heroes - the game allows you to train heroes, but you have to bear in mind that will lose weaker pokemon during the process. Training will, however, allow your character to develop quickly, making them even more efficient in combat.

Collect PM Tickets - you can acquire them by completing quests and missions. They allow you to purchase embellishments, quicken the creation of new pokemon or collect items after a lost fight.

Fight yourself - when you're fighting yourself, rather than in the automated mode, you get a lot more upgrades. This allows you to prepare for future fights better.

The type doesn't matter - in this game, you can have three pokemon of the same type in the team. You don't see what pokemon you're fighting against; all types of attacks are equally effective. 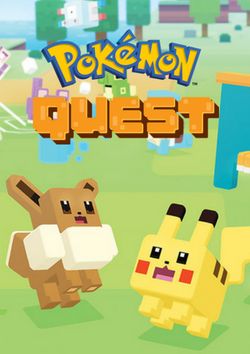 Pokemon Quest is an unusual action game, inspired by such productions as Minecraft or Pokemon Rumble. In the game, you explore a voxel world called Tumblecube Isle, catch Pokemon (or rather the caricatured voxel miniatures of them) and use them in battle. The production was developed by The Pokemon Company.

Pokemon Quest utilizes an isometric perspective. You start in your camp, which you enlarge and modify as the game progresses. Upon leaving the camp, you can freely explore Tumblecue Isle and catch the critters inhabiting it. The caught Pokemon can be used in battles against other players. The battles happen in real time, but your control over your Pokemon in combat is very limited: you can only charge an attack by pushing a button, then the creature attacks on its own.

Pokemon Quest features simple 3D visuals, resembling those of Minecraft. The in-game world is colorful and pleasant, which should appeal especially to Pokemon fans.