Crossbows are known for thousands of years. Some may think that they don't belong to modern battlefields. However, these weapons are still being used by certain units - Playerunknown's Battlegrounds has them, too. This chapter contains detailed descriptions of this type of weapon.

Crossbow is an unique weapon - there is only one type of this weapon available in the game and, this is why it is simply known as Crossbow. What is characteristic for this weapon is its high precision. It deals some of the highest damage in the game and bolts it fires make virtually no noise, apart from a faint hiss audible over a dozen-or-so meters. However, there also are downsides to the crossbow. The range of the weapon is strictly limited and it is only effective over medium distance (300-400 meters) at best, and after each shot you take, the weapon needs reloading which takes several seconds. 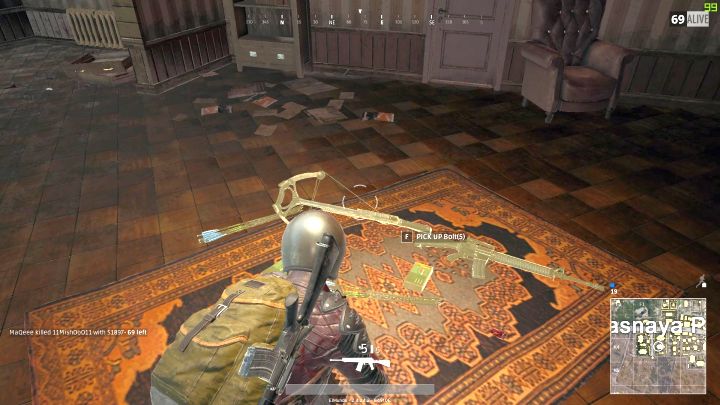 Crossbow is a unique weapon and is effective only in some situations.

In the game, there is only one crossbow available. The below table presents information on this weapon - damage dealt, clip size and ammo type and available firing modes.

The damage presented in the table is for a character who got shot at an unprotected torso. Depending on armor used and body part shot, the damage will vary - more details in Reducing damage chapter.

There are several things to remember, while using this type of weaponry: