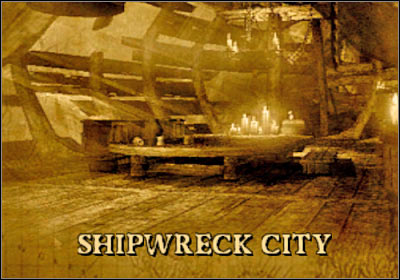 You shouldn't have any major problems acquiring all five pendants. You will be finding these items throughout the entire map. You will have to be on a look out for interactive (=destroyable) crates and barrels. At least one of the pendants will be well hidden, however if you explore your surroundings carefully, you should be able to find it... or you could head on to the main description in order to find exact locations. :-)

This is going to be your final approach with this mini-game. You will have to talk to one of the locals in order to be able to participate in the game. He is standing near a large gate (that's where the Pirate Lords are going to meet). Make sure that you're using Charm Cards, so you'll increase your chances of winning. Try and prevent other players from taking the lead.

Once again, you will have to go to the large gate. That's where you'll find a guy who's responsible for organizing a poker mini-game. My guess is that you'll be relying mostly on your current Charm Cards. I'm sure that you'll have a lot of these items in your inventory, but you will have to choose only three cards. Depending on a card, they will allow you to see cards of other players or will force them to raise. I'd strongly recommend achieving an early advantage and then playing passively, so you won't lose in any of the final rounds of the mini-game. Remember that you will have to be the one with the largest amount of money at the end of the tenth round.

You shouldn't have any major problems collecting 650 gold coins. I think it's quite obvious that you will have to destroy crates in order to pick up gold pouches. You'll also pick up a lot of gold coins from the bodies of fallen enemies... but I'm sure that you already knew that, so let's focus on the mission, shall we? ;-)