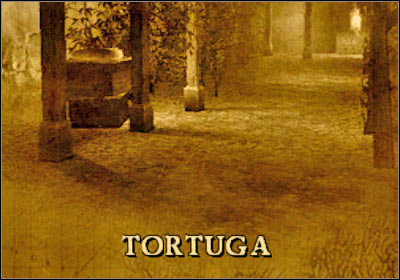 Despite the fact that you're going to have to find five pendants (instead of the usual four), you shouldn't be too worried about completing this task. You will only have to make sure that you have checked all barrels and crates and you will be able to collect them without my assistance. Otherwise, you should head on to the main walkthrough.

This is a very funny side mission and I'm sure that you won't have any major problems finishing it. You will have to find nine women, however it's easier than it sounds, especially since there's an icon above each target. You may have some slight difficulties finding the last (ninth) woman, because she can be found inside a local tavern. It's the same place where you can play Pirate Poker. Check my guide if you want to find exactly where to search for these women.

You probably had some problems understanding the basics of a dice game, however this time it should be different. I'm sure that you won't have any difficulties understanding the rules of this mini-game, because this a standard Texas Hold'em game. This means that you will be given two cards at the beginning of each round. Your main objective will be to figure out whether your competitors are bluffing, what they have at the moment and what are your chances of winning. I think I won't have to explain you the basics of Texas Hold'em, especially since there are tutorial screens at the beginning of the game. These screens will tell you almost everything. Obviously you will be able to use Charm Cards in order to cheat during the course of this mini-game. You will probably have more than three Charm Cards by now, so you will have to choose the most useful ones. Some of the cards will allow you to reveal cards of your opponents or will force your competitors to fold. Use them wisely. Remember that it's very important for you have the largest amount of money at the end of the tenth round. As a result, don't risk near the end, especially if you have a large advantage over your opponents. Otherwise they could take the lead and you wouldn't be able to catch up with them. 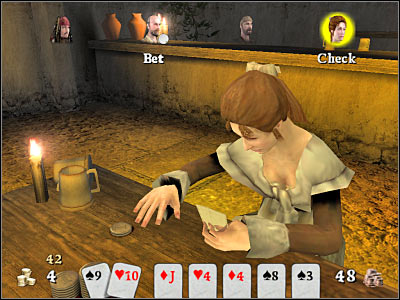 4. Rum Raid Part 2 - Protect the warehouse against the bandits.

You should consider reading the main description for this mission if you want to find out more about this particular challenge. All I can say at the moment is that you will probably have some serious problems winning it. Preventing the bandits from reaching the warehouse isn't going to be simple, especially when there are 2-3 of them nearby. Thankfully, even if you fail this mission, you will be allowed to repeat it countless times.

It may seem that collecting 1500 gold coins (instead of the usual 600-800) should prove to be quite difficult. Thankfully, it's not going to be. You won't have any major problems ending this task. You will have to remember about the possibility of destroying crates and barrels. As a result, you should be able to gather enough gold before even meeting with the Pirate Lord.

Once again, this should be a quite difficult challenge, however you will be able to make it a lot easier. I'll explain what exactly I'm talking about. During the Rum Raid Part 2 side mission you will be dealing with endless reinforcements. As a result, you should focus only on hitting your opponents because even if you fail this mission, you will be able to repeat it and the game won't undo results from this combo challenge. As you've probably noticed, your opponents will be running towards the warehouse, so you may as well stab them in the back. You won't have to worry about the counter-attacks too much. As a result, you should even be able to score a x35-x40 combo. Obviously this isn't necessary. Having a x21 sequence will do the trick.