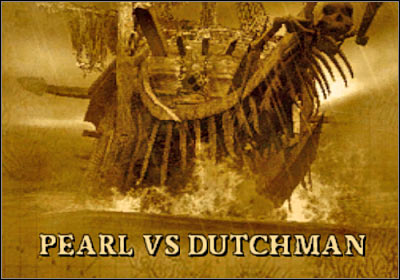 I'd strongly recommend that you familiarize yourself with the main description for this mission. Otherwise you would have probably missed one of the pendants and you wouldn't be able to end this challenge. You will also have to acquire that particular pendant very quickly, so you won't fail any other goals.

I guess I won't have to add anything else. You will be taking part in monster battles quite regularly and I'm sure that you'll kill more than 10 creatures.

3. Avoid Detection - Avoid being seen while trying to explore the main deck of the Flying Dutchman.

This challenge is quite tricky and you may have some problems finishing it, especially since the game won't tell you exactly what has to be done. Your objective will be to follow a certain path once you've reached the deck of the second ship. Check the main part of the guide for additional clues on how to do that..

You shouldn't have any major problems with this task. Most of the enemies will leave gold pouches behind and I think it's quite obvious that you need to pick them up. Also, you will come across two stashes while trying to explore the Flying Dutchman. You will find a lot of crates there, so it'll also help you gather enough gold coins.

This is going to be the most difficult challenge for this mission, however you will have a lot of opportunities to score a good sequence. There are a lot of monsters on the map. You should also know that these monsters are going to be slower than the soldiers you've met in Port Royal. As a result, you won't have to worry about their counter-attacks too much and you won't be blocking their attacks too often. There are about 3-4 places with huge monster battles, so it's best to wait for more monsters to show up before you decide to give it a try.