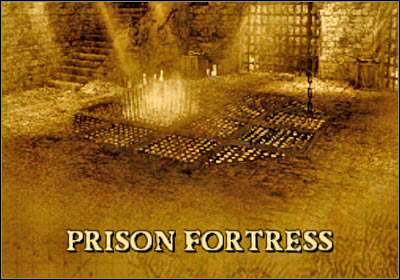 This is a fairly simple objective. If you want to find out where to search for the crab pendants, head on to the main description of this mission. You will be finding these objects inside barrels and crates. This means that you will have to be on a look out for interactive objects. Thankfully, their locations won't be random. You will always find the pendants in the exact same spots.

This is also a very simple task and I'm sure that you won't have to worry about finishing it. It's because you'll defeat more than 20 enemy units during the course of this mission, so you won't have to search for any additional opponents.

This sub-mission is very similar to the second one, mostly because you won't have any major problems finding the cages. You will have to free all prisoners in order to advance in the course of the mission. Otherwise you wouldn't be able to reach new locations.

You can have some problems understanding what has to be done in order to fulfill this particular goal. You will have to perform a certain move - a dodge move, to be more specific. Additionally, you will have to be standing near one of the pits. Check the screen if you want to find out what exactly I'm talking about. Start off by pressing and holding a block key. Now you will have to wait for one of the enemy thugs to attack you. Once this happens, start hitting the side movement keys. As a result, your characters should perform a dodge move and the opponent will die. You will have to outsmart four enemy units in order to fulfill this goal. You should also remember that you won't be allowed to do this everywhere. There are only a few locations with the chasms. One of them is near the start (screen). You will come across a bridge later during the mission and there's an area surrounded with water near the end. 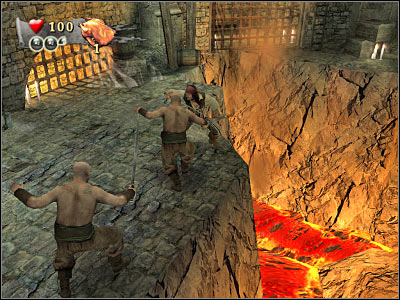 This is an extremely easy objective. You won't have to do anything in particular. Just be on a look out for gold pouches. If you've been to all main rooms, you should be able to gather more than 1000 gold pieces. Just remember to destroy all barrels and crates. Additionally, some of the enemy soldiers will leave gold pieces behind. Pick them up as soon as possible. Otherwise these objects would have disappeared from the map.

This is by far the most difficult objective of this mission. The main reason is because you won't have a lot of opportunities to fulfill this goal. You will take part only in one bigger fight and that's going to be your only chance to finish up with this mission. Check the description of the main mission if you want to find out more about this. The most important thing while trying to score a high combo is that you avoid being hit by any of the surrounding enemy troops. Otherwise you would have to restart collecting combo hits. I would recommend choosing faster attacks. You can perform them by pressing the Z key. Additionally, you won't be allowed to take too much free time between the hits. As a result, if you notice that one of the soldiers is blocking your hits, immediately attack the next one. Avoid counter-attacks at all costs. It's sometimes better to block longer rather than lose the entire combo.

Sadly, you won't be able to affect the outcome of this particular goal, mostly because Notoriety points are being added depending on how well you've managed to deal with other problems. First of all, you should try and complete all other sub-missions (including the Jackanism mini-game). Also, try and defeat enemy units by using high scored combos. It also includes some of the minibosses (they are going to have >100 health points).