In this chapter of the guide for Phasmophobia you will find a list of all the ghosts, as well as their characteristics, powers, a list of necessary evidence and tips on how to deal with them.

At the time of writing this guide, you can encounter 12 different types of ghosts in Phasmophobia. Some of them are relatively harmless, but they are malicious and will make noise, as well as manipulate objects (the famous Poltergeist), while others are extremely strong and scary (Banshee, Demon). To correctly determine the type of ghost that haunts a particular building, you will need to collect solid evidence. Therefore, it is worth knowing what are the characteristics of each of them. 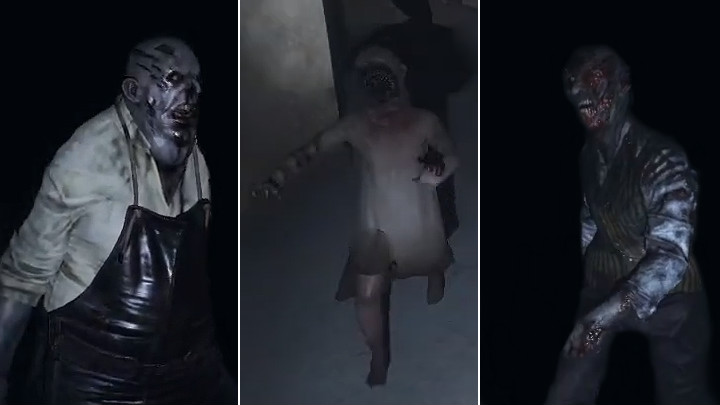 Banshee is one of the most dangerous ghosts you can encounter in Phasmophobia. The Banshees are famous for stalking their prey until they eliminate it.

If the hunting phase starts very early, e.g. after a short time after entering the building, it may mean that you are dealing with a Banshee. Pay attention to who the ghost attacked and whether it will happen again during the next phase of the hunt. If so, you can rest assured that the rest of the team is safe. You can use it to gain an advantage over the ghost and gather the necessary evidence.

Demons are some of the most aggressive ghosts that you can meet in Phasmophobia. They attack much more often than other ghosts and usually without warning, forcing players to hide frequently.

If you are dealing with a demon you need to gather the necessary evidence as soon as possible. To cool down the demon's urges, you should have a Crucifix and Smudge Sticks at hand. Sanity pills will come in handy, to quickly build up the Sanity of your character. If you want to use Ouija board the basic question should be: (where are you?).

Jinn is one of the ghosts that you can encounter when completing missions in Phasmophobia. He will attack only when his territory is breached and he feels threatened.

You can quickly realize that you are dealing with a Jinn-type ghost when electrical devices around you are going crazy. Since the Jinn are territorial spirits, they may be more active when you stay in the haunted area for longer - in such cases, the hunting phase may occur much more frequently.

Mare is another type of ghost that you may encounter while completing missions in Phasmophobia. Ghosts of this type are extremely dangerous in total darkness so be on your guard as soon as the light goes out in the building.

Since the Mare spirit is sensitive to light, make sure that the main rooms and escape routes are properly lit - turn on the top lights, throw lit lanterns on the ground, light candles. If you're playing in a group, consider leaving one player near the fuse box to immediately restore power when the ghost turns it off.

They are one of the most aggressive types of ghosts that you can meet in Phasmophobia. Unlike shy Shades, they become much more active and aggressive the moment they encounter more hunters.

Due to the fact that Oni become very active when hunters are in a group, you can quickly expose them and collect the necessary evidence of their presence.

Phantoms are known to possess humans, but this is not possible in Phasmophobia. However, it is worth noting the fact that the Phantom can take the form of one of the members of the group, and looking at him quickly reduces the Sanity level.

If you suspect that you are dealing with a Phantom, start paying special attention to the Sanity level of the character - when it falls below 50% consider visiting the truck for a while to get some rest. It is also worth noting the fact that the Phantom can take the form of one of the players, but is not able to use objects, so his hands are always empty - pay attention to this.

Phasmophobia couldn't have gone without one of the most famous ghosts - a Poltergeist. This noisy spirit can manipulate various objects to instill fear in the hearts of hunters.

You can easily realize that you are dealing with a Poltergeist when from the very beginning many objects around you have been moved or thrown, and doors are opening and closing too often (especially two doors at the same time). Interestingly, the Poltergeist is the only type of ghost that can be identified after only two key pieces of evidence: Fingerprints and Ghost Orb.

Revenant is one of the types of ghosts found in Phasmophobia. He may not be one of the most effective spirits, but he can often change targets during the hunting phase, causing panic among a group of hunters and effectively making it difficult for them to complete their task.

The best way to disorient a Revenant spirit is to quickly hide from it as soon as the hunting phase begins. The Revenant moves very fast when hunting its prey and in most cases you will not be able to escape from it.

Shade is another type of ghost you may encounter in Phasmophobia. Shades are shy spirits and their activity is lower when faced with a larger number of hunters. They attack at a time when the Sanity level of your character significantly deviates from the normal level.

If during the exploration of a building (especially in a group) you have difficulty detecting the ghost's presence, it is very likely that you are dealing with a Shade. In such a situation, it is worth taking the necessary risk and leave one person in the haunted room in order to see if the ghost will appear.

The most common type of spirit in Phasmophobia, which does not have any additional powers, however, it should not be underestimated. Due to his lack of distinctive features and behavior, it is difficult to distinguish him from other spirits, especially without any evidence.

If you realize that you are dealing with a Spirit, take Smudge Sticks with you, enter a room haunted by the spirit and ignite the item (the effect lasts for 15 seconds). Then move around the circle to catch the spirit at the required distance (6 meters).

One of the most dangerous ghosts you can come into contact with in Phasmophobia, and the only one that can fly and penetrate walls.

If you suspect that you are dealing with a Wraith - type ghost, scatter Salt in narrow corridors, doors, and any escape routes to buy some time when escaping - this will force the ghost to stop the attack. Also be careful where you hide during the hunting phase, because the Wraith can see through doors, closets and cupboards - try to break his line of sight by hiding behind a solid wall.

Yurei is an unusual spirit, but nevertheless extremely dangerous. Despite the fact that he does not manipulate objects and can not quickly reach his victim, he constantly lowers the Sanity level of all hunters.

When a character's Sanity levels decline rapidly, it may mean that you are dealing with a Yurei-type spirit. In such a situation, it is definitely worth making sure that the rooms are well lit, in order to compensate for the decrease in Sanity levels. Sanity Pills will come in handy - they can quickly improve the Sanity levels of hunters. Using Smudge Sticks in the haunted room will keep Yurei from moving and attacking for a long time, making it easier to gather the necessary evidence.

In Phasmophobia, you can distinguish a few types of particularly agressive ghosts that will attack more frequently than others.