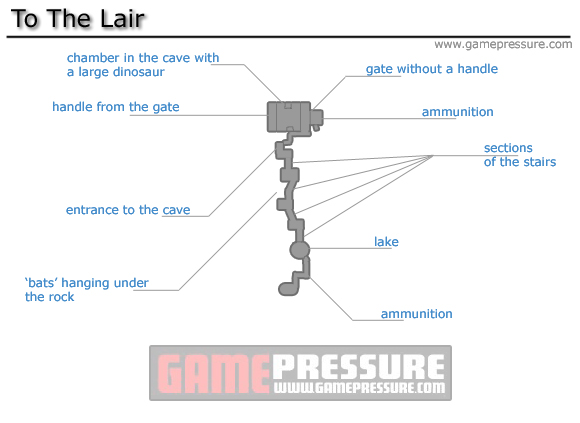 You are starting the stage in the jungle. Take the available path and find ammunition's crates. Leave the narrow way's and do not enter the lake, because the water is deep and you won't be able to shoot.

Turn the sight on and start shooting everything that moves in your range (monsters flying in the air and running on the ground). One hit will eliminate one opponent, so try to aim perfectly. There will be plenty of monsters and low ammo, so don't waste all bullets.

After the fight, swim the lake and go up the stairs. Some monster will attack you from the nearby trees - defend yourself and then move ahead. Fight off the next attack and take notice of the rock, which is located in front of you. There will be some enemies above it. Of course, eliminate them (first shoot might scare the rest away).

Take the smaller stairs from the next 'platform', and turn left. There will be a monster right before the wall. Killing him should bring no difficulties to you {he won't run). Now, move to the tunnel's entrance located on the one of ruins' walls (blocked with boards).

In order to get out, you'll need to open the gate. Unfortunately, there won't be a handle to do it (it's on the other side of the cave). The road is dangerous, because big and strong dinosaur is marauding nearby. Don't fight - be clever.

Pick up the bone and move in stairs' direction. You should find small bugs on the wall, which will be perfect bait. Throw one bug on the center of the cave and - when the dinosaur starts to eat - quickly run to next raising (picture on the left). Go up the stairs and be ready for two 'some sort of bat' enemies attack. Take care of them with bones or sniper, which you'll find there.

To run to the next raising (with fire, on the other side of the chamber), you'll need to manoeuvre the dinosaur again. Shoot one of the monsters hanging under the ceiling (the orange arrow shows the place, where you must run, the red one is the bait location). When it falls down, it'll attract the monster, so make take advantage of the situation.

Get rid of snappish monsters on the next 'platform' (spears before the guns) and light one of the spears. Now, throw it in bushes blocking the stairs (picture on the left). Run there, when the dinosaur will be go away.

Finally, pick up the wanted gate's handle. Some spiders are guarding it, so use the bug walking on the bones (left screenshot) to distract them.

Open the gate and take ammunition located in the chest. To finish current level, enter the small tunnel situated on the right, behind the gate.