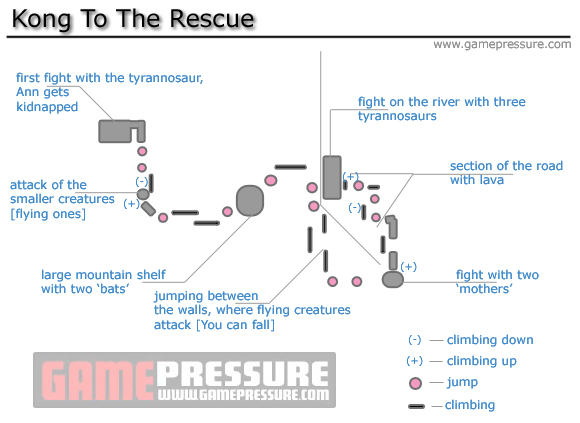 The next stage, where you'll control the Kong. At the beginning, fight against the tyran. It'll be easy and you shouldn't have any problems (take advantage of the wall to kill the enemy faster). The camera will change after the victory and you'll see the scene, in which one of bigger monsters (flying) will hijack Ann again.

Take the small section of the way now, stand on the edge and jump towards the branch (two jumps). Then get at the planted wall and slide down.

You'll climb small shelf there. Some little bats-like monster will attack you, so get rid of them. Climb the vertical wall up and approach the next edge. Then jump to branches...

...and on the wall. After short way, jump on the opposite wall and then on the rock. Two flying beasts will attack you there, so eliminate them.

After the fight, approach the edge, then jump and catch the sticking out tree to get on the planted wall. When you'll reach it's end, the camera view will change and you'll be able to see distant, 'ready to use' branches. During this jump, the action will slow a little bit for bigger effect. Take advantage of 'lever' until you'll reach the moment, when you'll be force to jump from one wall to another.

After two next jumps, you'll get to the small shelf. Fight with the monsters, who hijacked Ann awaits you now (two enemies, plus a few bodyguards). They'll attack you when the camera will change (picture on the left), so wait for proper moment and hit the opponents, when he'll be close enough. Enemies die after three hits (then it's necessary to finish them off - right screenshot).

When enemies will fall down for good, climb the vertical wall up and unblock the gate (Ann will be standing there, so pick her up).

Behind the gate, go through the black tunnel (take advantage of the wall too) and get to the place with lava. Turn left and jump on the sticking out branch and then on the wall.

Slide down and jump on the pillar in the middle of the 'pool' in the proper moment. Be aware of rising level's lava and jump to the opposite wall, then to the tree and to the next wall (climb up from there).