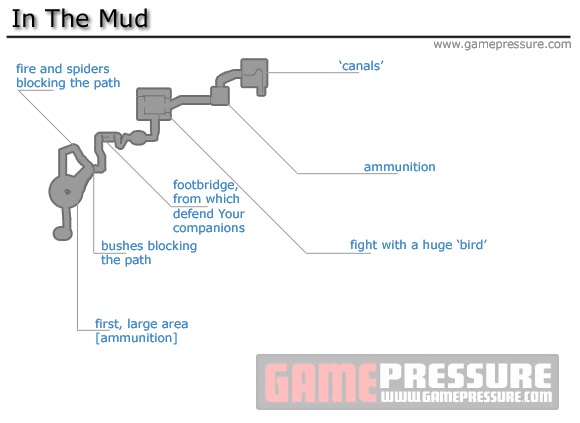 You will reach the place, where you have to enter water (there's nothing to worry about - some worms will be only flying above [bait]). Take advantage of fire located near the building on the other side and clear the way by destroying the shrubbery. First however, remember to take the bait and draw dangerous spiders' attention to it.

You'll run into the next section of the way, which leads through water. Take notice of small, wooden footbridge located above. Walk there and protect your comrades during the water crossing (some water lizards to eliminate - spears should be enough). Jump from the platform and join the group on the other side.

Look up to see the flying monster, identical like the ones from previous stages, where I've called him 'mother'. Run to the stairs of the pyramid and go up on the first level. You'll be attacked by two flying creatures (some spears lying nearby, so pick up them).

After the fight, move ahead. Go down the stairs and enter water again. In the half of the way, turn round, because two water lizards will attack you. Protect your comrades and eliminate them.

You'll reach the land, where four smaller dinosaurs are waiting for you. Get rid of them with spears from the water to avoid the direct battle. Pick up some sniper rifle's ammunition and enter the water again. Move ahead, towards the stone building.

You'll reach something like channels. Destroy some obstacles blocking the way and walk inside. You should find yourself in the darkened place, from where you can go in different directions. The fastest way is to destroy the next blockade situated in front of the first passage (two monster behind it). Kill the creatures and walk towards the spear.

You should see the rock (left screenshot), so approach it (two next lizards will attack you, but the ammo from sniper rifle should be enough to eliminate them). Walk ahead (picture on the right). Destroy next blockade, kill new opponent and move straight ahead.