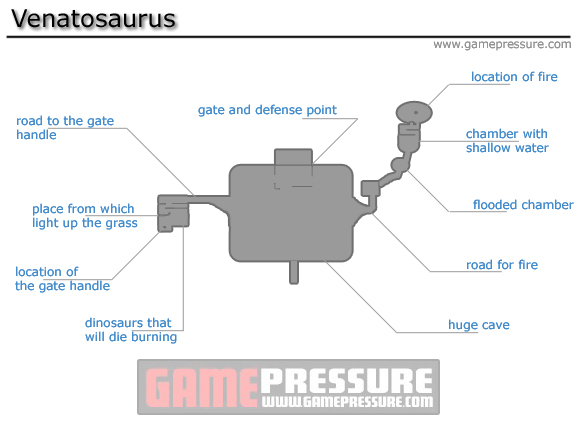 You'll reach the gigantic cave, with stairs in the center. Run up (try to do it fast), where defence point is located (place between a few destroyed walls).

The enemies will show up from. below, but from different directions. Stand on small raising with some bones nearby (picture on the right) and start shooting. In this way, you won't have to turn around all the time. Jump down only when your comrades will ask you to, but quickly return back. You can also approach attackers (shots will more effective). Remember about having loaded bullet all the time (take advantage of short pauses between the attacks). To shoot down the dinosaur you'll need three hits, so try to save some ammunition.

After going past the first tunnel you'll come across the small room, where you'll find entrance to the narrow path, taking down (destroy the blockade first). The lower part will be flooded.

...climb on the 'island' with the bait. Take one of the worms (spear) and throw it ahead, to the next cave (with water on the surface). Some enemies will fall in your trap, so get rid of them with the rifle.

You should reach the goblet covered with shrubbery (left screenshot). It won't be surrounded with wall, so you will be able to throw fire from nearby chamber. Move ahead, through the waterfall.

Run down now. From the island's centre you should get fire. Fire the spear up and throw it into the goblet passed earlier (right picture). When fire will spread on the shrubbery, move up again, through the waterfall. Try to do everything very fast, because crabs will attack you after a while, and there is no sense to kill them.

Along with Ann, set all goblets on fire. In the room, where you have used the bait, some crabs will be waiting for you. Eliminate them with the rifle. You can have problems with the worm in the flooded room, but use the lighted spear if you'll be able to return for another one.

You should see the glade, where two dinosaurs are. Do not waste ammunition, just throw the spear in the grass to fire it up and 'fry' the beast.