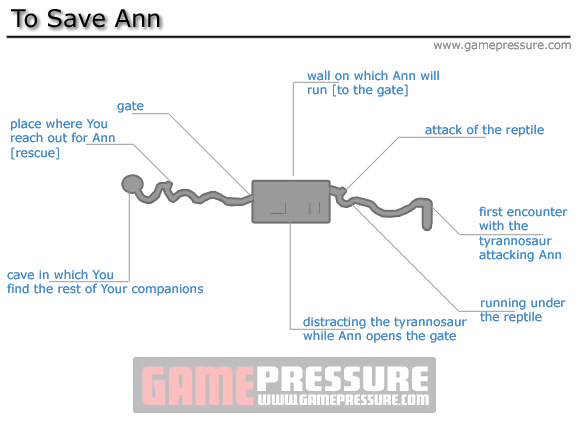 Leave the cave. You'll see Ann chased by tyrannosaurus rex. Move fast to save her.

Turn left and take the narrow wall down. You'll find yourself in the small cave and then near the river.

Move downstream until you will reach the tyrannosaurus. Pass under him without any fears, because he'll be taking care of Ann only. Turn left behind the creature and move under the rocks.

The wide glade is located behind the columns. Ann will run on the wall on the right. The lever is located at her way's end and only Ann can take advantage of it. Your job is to make tyrannosaurus rex busy and he's probably behind you now. Use the stone columns for protection and attack with spears lying there.

You should see Ann running along the glade at the exit, so head to her quickly (take the top shelf), but if the tyrannosaurus rex will surpass you (right screenshot), you won't be able to save Ann in time.

Proceed upwards, deep into rocks of the cave. You'll meet comrades there (without Carl) and finish current stage.