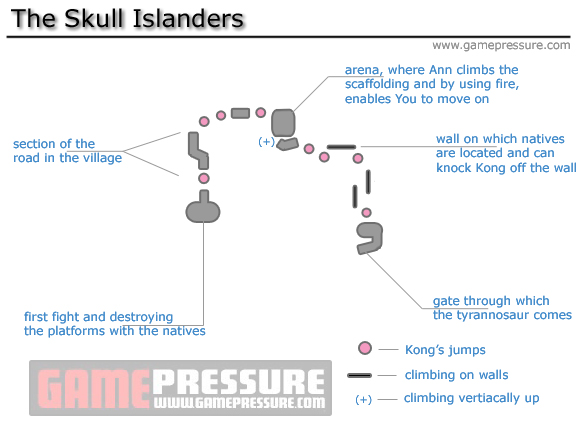 You'll have to fight at the begging of the mission. Natives will attack you from two wooden platforms, placed on either gate's sides. To eliminate them, throw tree, fragments of the building, where Ann is hiding or one of two dinosaurs which will show up. When the platform will collapse, the area will be safe.

You'll get to small road in natives' village. Move ahead and try to kill all encountered opponents. Also, you'll have to destroy some buildings.

Release Ann from the hand. She'll climb the ladder up (after passing the catwalk) clear your way with fire (some 'bird' will attack, but she'll make it on her own). Eliminate some natives trying to kill you (they'll come out from two caves. Take advantage of the branch if you want.

When fire disappears, climb the wall up.

Move ahead as fast as you can, because some natives' platform will be located there and (during the attack, you might fall down, so watch out). At the wall's end the camera view will change, showing you next element perfect to catch during the jump.