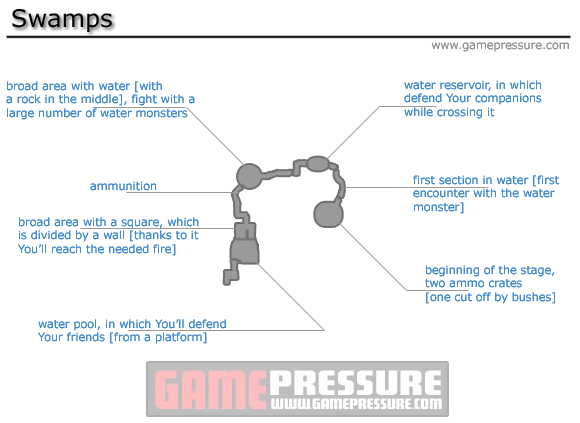 To get to the crate, pick up the bone lying nearby and fire it up at the fire in the building. Throw bone into bushes. Take the ammunition to sniper rifle, which will be useful after.

In this stage, fights are going mainly in water and you'll attack all time by the monster living there. You haven't seen these creatures earlier (something like snakes on four paws). When they'll attack, you should be able to see and hear the splash of water.

When you'll be standing on the other side, enter the pond alone. This time Hayes will be covering you and you don't have to worry about your life, because he's a good shooter. Try only to move away from the monster for a while, so Hayes will have more time for precise aiming.

...you'll reach the bigger reservoir one hell of a fight will start (many lizards attacking from different sides). Don't save ammunition but shoot as fast as you can. Some flying creature will show up, but shooting him down will be useful - when his body fall, it'll eliminate a few enemies. After the battle, head to the land (right picture).

Taking the next, short passage between rocks, you should stand on the bigger glade. Lightly destroyed wall is located in the centre of it. Climb up and head to the bigger platform.

Now, turn left and start killing enemies moving in water. You'll cover colleagues this way, because they won't make it on their own. The way is long, so try ain precisely and don't waste ammo for nothing. Move ahead when your friends safely reach the other side. Hayes will be covering you again.