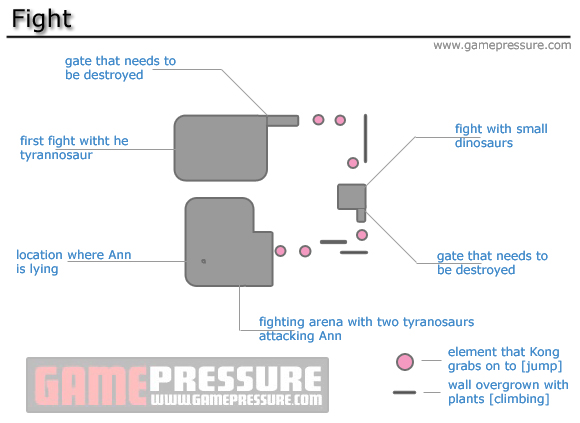 You'll start the stage with a duel with the tyrannosaurus rex. There will be only one fortunately, so you won't have serious problems in killing him (Kong's rage will be useful). Hit the enemies until he'll be weaken, grab him and throw at some wall to collapse on the ground. Approach the enemy and finish him off.

Ann will escape from your hands (either you'll let her go) during the fight. She'll run through the gap in the chipped gate. After a while, you'll notice some big lizards attacking her. Of course, your job is to save Ann.

Move ahead and jump towards the stone edge. And towards the next one. Jump down, catching the planted wall.

Now, take advantage of next 'handle' to jump onto small square. You'll attacked there by some smaller enemies, so quickly get rid of them, destroy next gate and head further on.

Move to it's end, jump on the opposite wall, and from there on two next handles. On the last one, the camera view will change, and you'll see two tyrannosaurus rexes approaching Ann (Kong's in the distance). Jump towards the first one and thanks to attacking from the height, you'll serious hurt him.

Now, the second huge battle begins and it'll be the last one in this level. You'll fight against two tyrannosaurus rexes, attacking in the same time. Try to control situation all the time and attack in turns. Take advantage of planted walls also and attack from the height. Furthermore, you can easily get to the earlier handle and again attack from the bigger height (enemies are able to throw you from the walls, but not from the handle). Try also grab one opponent and throw him at next one. Kong's rage isn't the best option here, because it turning on for a long time and tyrannosaurus rexes attack systematically. You'll have one opportunity to take advantage of rage, but you'll have to turn it on quickly.