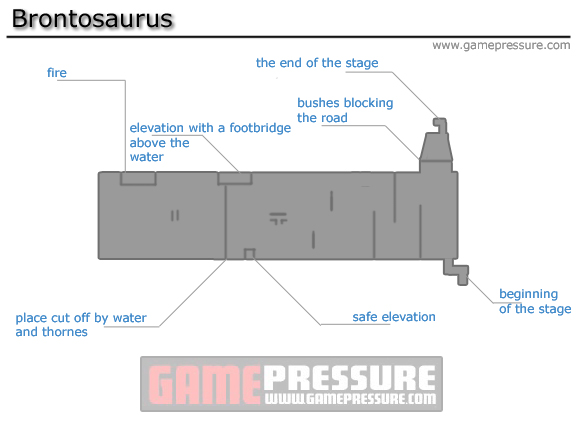 After passing the small tunnel, you'll get under the marching giants' feet again. Be careful and try to manuver them. Head to the other side of the valley. You should see stone construction. You'll have to move behind it but unfortunately the shrubbery is blocking the way. You must find fire now.

Move in the same direction as brontosauruses. The road will be winding at the beginning, because some thorns will block it. You should find the parachute with ammunition crate. Pick ammo up, which will be VERY helpful.

Further on, run up the stairs located on the right side of the canyon. Wooden bridge is situated there, so move on the other side of the river.

Head under the rock on the waterfall. You won't be able to pass this way with burning spear, so first throw it at goblet on small raising (right screenshot). Now move there and fire the spear up.

...fire next goblet (left picture) and quickly run on the right side, to stand on raising, where stand a hero from right screenshot. It's a safe place and no dinosaur (two bigger and two smaller ones) is able hurt you there. Move ahead.

Approaching comrades, you'll hear tyrannosaurus rex's roar and killed brontosaurus. Run as fast as you can behind the stone construction and set the shrubbery on fire, before the opponents will destroy the wall, protecting you. Head up the stairs and enter small tunnel to finish the level.