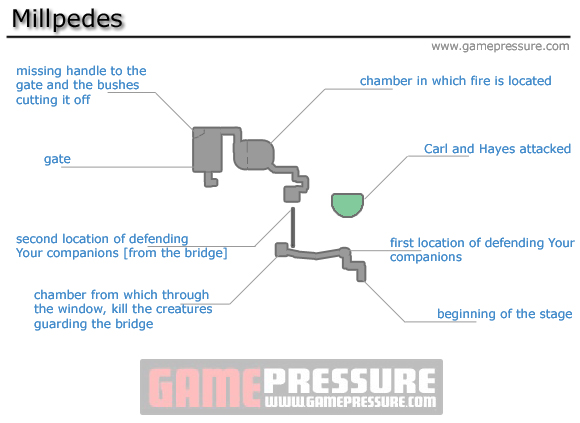 Passing the small section of the way between rocks, you'll again reach the canyon with moving brontosauruses. Your comrades stand on the other side of the precipice. Carl will try to open the gate and Hayes will kill some monsters. Use sniper rifle to help him, or they won't wake it on their own.

At the road's end, you'll reach the wooden bridge. When you get near it, some flying creatures will attack you. Don't fight, but simply run to small room with windows, located near the catwalk. Take advantage of the sniper rifle (the view from the windows - right picture).

Approach small wall, which divides the room in two parts. Do not destroy the wooden gateway, but kill next opponents through the gap located close by.

You'll be passing the next section of the tunnel, where small windows are placed (Carl and Hayes will stand behind them).

To get it, return (long way) to the place situated in front of the waterfall (two worms was fighting there). Look at left picture and you should see fire container located under the ceiling. Shoot it down and you'll be able to fire the spear up.

Now, you have to avoid the waterfall. Remember the place where you've to kill some worms by taking advantage of the hole in the wall... throw spear there to the next chamber (screenshots presents the whole process). Thanks to it, fire is located on the other side of the waterfall.