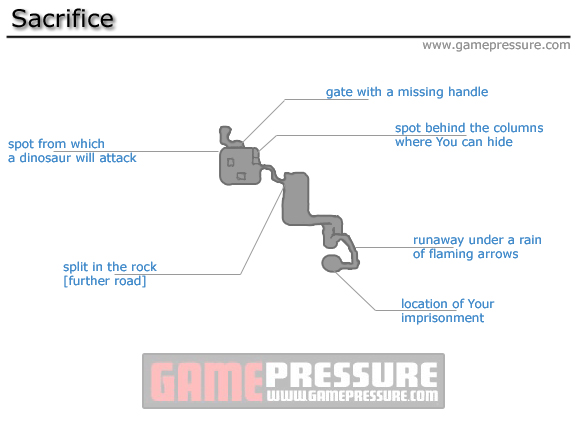 When you look at the altar, you'll see one of the key scenes from the movie and the game. Ann will be given as sacrifice and kidnapped by King Kong.

The road you have to take to run away is quite twisty: first, run down the mountain, then go through the narrow passage (left picture), and after all that, run up again following the path and turning into the forest (right picture).

You walk up to an 'alley', which is cut off at the end with a scarp. The way you have to go is through a narrow split in the rock, so take it.

At the end of it is a broad arena... fighting arena, that's why pick up the spear lying right at the entrance. By following Carl, you'll reach a spot in which you'll be warned that something is coming and you'll be attacked by the first dinosaur in the game (left picture).

His first target is your companion, so once Carl is being attacked, throw spear at the dinosaur, which will make him interested in you. Quickly get some weapons (bones in the middle of the 'arena' and spears near the walls) and hide.

An open fight without a tactic is pointless since you'll lose, that's why you have a couple of spots where you can feel safe (Carl is going to hide there also). It's the wall behind the columns (to the right of the gate) and the three 'huts' in the middle. Your advantage is also going to be a creepy worm which will attack the dinosaur (although be careful since you can also become its target), I showed it on the previous set of two pictures. When the dinosaur is defending from the worm, pick up the spears and hurl them at him. You'll have to do this a couple of times.

When the danger is gone, open the gate, and to do that, you'll have to find one of the handles. It is located in one of the arena corners, behind the bushes. Knock down the pitcher with fire to get to it. Pick it up and place it in one of the poles. Carl will automatically walk up to one pole and you'll go to the other and turn it simultaneously.