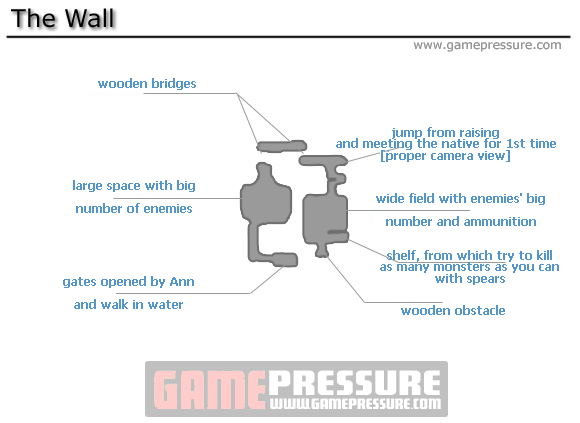 Then, go through the split in the rock. You'll reach a broad 'meadow' in which a lot of creatures live. Stand on the elevation on the right and kill the creatures by throwing spears at them (when you're out of spears, use the bones that Ann brings you). You can kill them faster by knocking down the containers full of fire onto the bushes (with the sniper rifle - like in the picture - or with spears).

Remember that lighting the bushes on fire won't eliminate everything so once you're down there, you'll have to fight.

Once all dangers have been eliminated, move on the only available road. You'll walk through a narrow, twisty tunnel until you get to a spot, at which you'll have to jump off the elevation. That is where you'll see for the first time (look at the wooden footbridge above your head) a native.

No one will attack you there, so follow Ann without any worries. At first, through the first bridge...

And again, you'll reach a large area, in which you'll fight with a large number of monsters. Use bones to exterminate them, since someone's remains will lie there.

Once you think you've killed enough monsters (from the distance - I advise killing most of them), make a passage by burning the bushes with fire from the wall on the right.

You'll reach a spot where Ann will climb a wall onto a rock shelf, and you jump into the water. She will open the gate for you.

Walk a short distance on land and jump into the water again. This time opening the gate will create a close meeting with unfriendly bushmen. You'll be attacked and you'll lose consciousness.