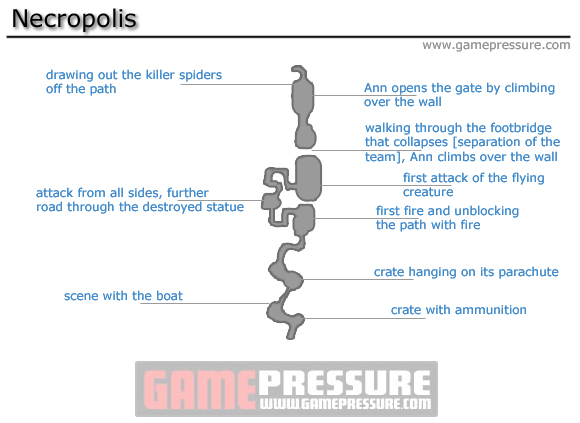 First, follow your companions into the open space. You'll notice a crate with ammunition there and when you move up to the cliff, you'll see a boat with people on it, who are fighting with the current.

Walking on a narrow passage, you'll move onto the other side of the shelf. A crate will hang there, throw a bone at it to make it fall and take the ammo. After that, follow the only available path, which leads into the mountains.

By following the road (next tunnel in the mountain), you'll approach a large room with multiple constructions on the walls - with statues - (estimating, it's a tomb). There will be a pretty large mass attack here. Try not to stand in one spot and look around all the time. Also, watch out for your companions. If they will be in trouble, you can help them immediately.

When the first assault ends, there will be a short break, after which there will be a small earthquake and more 'worms' which will destroy one of the statues (picture two) and create a new road (before you move on, kill them all).

Once you're out, kill some monsters (if you want, pick up the bones that lie there), and then move ahead. When you reach the scarp, a flying creature will attack you (I'm not a dinosaur expert, but it's not a pterodactyl). Kill it with your pistol or throw the spear (if it'll try to attack you, defend by stabbing it with spear). After all that, take the wooden bridge (picture two), which will fall apart once you're on the other side.

When you'll be cut off from the group, Ann will try to help and walk over to you on the mountain wall. You should try to cover her, since some monsters will start attacking. If you are out of ammo, get it the nearby crate. Once she is safe, walk over to Ann on the twisty, wooden construction.

When you go further, you will be attacked by flying creatures, so shoot them down (notice that one creature will be eating - easier to kill - another creature). When you're walking down off of the small elevation, pick up the spear and light it up in the fire, which is located a little further on. Then, throw it into the bushes. You can go ahead and burn a couple of opponents.

Further on, spiders will block the way by twirling on your path. When get close to them, they'll attack and kill you. The solution is to kill one of the two bugs, which cruise around there. That will draw spiders to the dead bug (there's nothing like free food!).