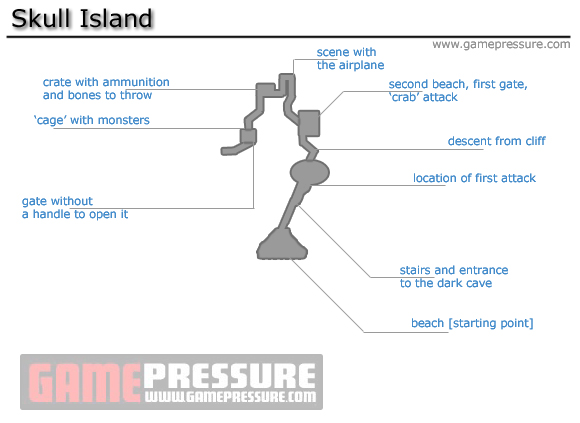 One of the survived crew members will fire a flare. Talk to Carl's quite funny texts (the fat guy with the camera) and then walk up the stairs until you'll reach a cave. It's very dark inside and you won't be able to see a thing there.

Wait until Ann walks into the cave (by the way, she's a brave woman and she doesn't look like one :)) and lights a torch enabling further exploration. Once inside, take the pistol from the dark skinned guy (Hayes).

In the same moment, you'll be attacked by a group of unidentified monsters (something like crabs), so use the weapon to defend yourself. Stand near the skulls placed on the poles and shoot into the darkness (unfortunately you'll have to shoot at random). You can also move up and wait until the enemy comes out, but it's a risky challenge. Once the music becomes calmer, you'll know that there aren't any enemies left to fight off. Follow the group into the water and then save Ann from one half-dead monster's attack.

Take the only available path. You should get to the blockaded passage. Destroy it with pistol's butt (don't waste ammunition here, it'll be more useful in the future).

Next, go down the cliff with your crew onto the beach where a weird, wooden construction and a gate in a concrete skull is located.

There should be two wooden poles with handles in front of the gate, used to turn around. Grab one and turn it at the same time as your comrade will.

While you're doing that, Carl and Ann will start recording the first scene to the movie. Unfortunately, her scream will alert unwanted guests. The assault will come from two sides: from the sea and from the path on the cliff. Shoot enemies down with the pistol, you shouldn't have any problems. After killing opponents, you'll hear the next scream and the new enemy will come out of the sea - this time bigger and stronger one. Shoot him all the time. He'll also try to grab your comrades. If that happens, shoot the enemy to free your crew member.

After defeating first tough opponent, finish opening the gate (although your friends might do it for you) and walk up stairs.

Run straight ahead until you'll reach a place where the airplane is flying. It'll leave you very useful package, a crate with ammunition. It's located on a larger shelf behind a small split in the rock.

After the fight, head further and reach another In order to open it, you must find a handle for one of the poles. It lies near the gate (picture). Pick it up and place the handle where it belongs. Open the gate.

Follow your comrades: take the passage on the cliff, move up the stairs, and then through the split in the rock. Then jump off the small hill.