Dreams in the Desert Sand is the fourth story mission in Pathway. This is mission is more challenging - each consecutive mission increases the difficulty level and changes types of enemies you will face. 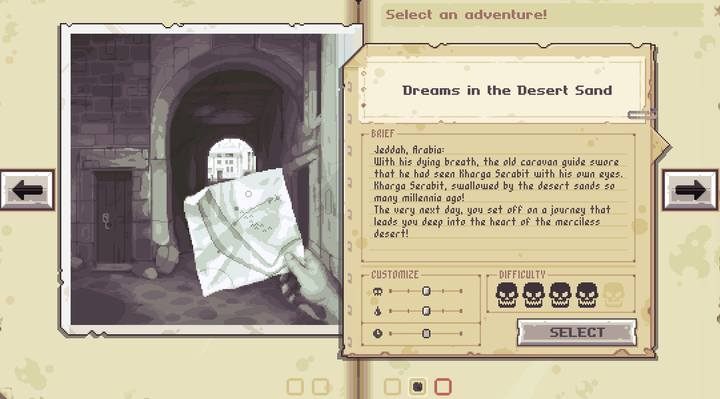 Dreams in the Desert Sand

The following mission in Pathway is set in Saudi Arabia. You have to complete 3 maps. This area offers much more valuable treasures so explore the map carefully. You also have an increased chance of finding fuel. However, there may be problems with money. If you run into this problem, avoid fights in the events and focus on looking for unguarded treasures. 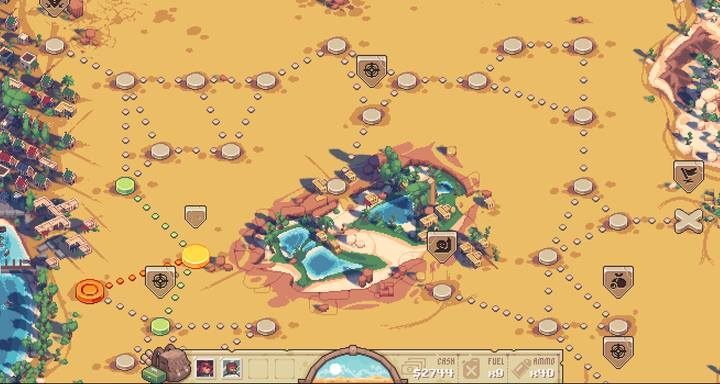 The last battle on this map requires you to defeat a few Nazis. After that, you have a random chance of restoring health and armor. Try to save up a little bit of fuel for the next map.

The second map is slightly larger and it has three possible paths leading to the destination. It is highly possible that you will start the mission near a merchant. Go to that person and buy more fuel.

You can avoid fights at the destination point. Your characters need Shadow and Brute skills, and they have to use them successfully (this is random). Do that, and you will avoid fighting the Nazis.

This is the last stage. The abandoned Nazi jeep, located nearby, has some fuel. This map is a vast desert. It is necessary to carefully calculate the shortest route, taking into account possible detours to avoid ambush points or to visit merchants/tents.

The final battle is exceptionally difficult. You will face 8 enemies in a confined space - a guard dog, 4 Teslaborg, an officer and 2 medics. Try to stay behind the covers throughout the entire fight. The enemies are located south of your position. You won't be able to one-shot the majority of them. Because of that, you should approach each enemy in pair. It's a good idea to send one person behind enemy lines (preferably from the right, down the corridor) to eliminate the officer who can grant any unit an extra turn. You should watch out for the medics. Kill every enemy, don't leave them with a few health points left (at this point of the game, medics are able to regenerate 45 health points).