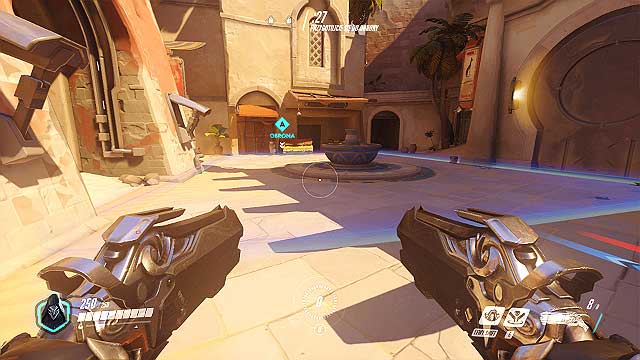 The point marked as seen above has to be defended for a certain amount of time.

Currently, there are 12 maps available (3 for every mode). Each one is nicely designed and featuring many nooks and crannies ideal for ambushes or vantage points suitable for sniping. Each map also has points where you can find first aid kits, the locations of which are worth remembering so that you can regain health, if your character doesn't have any a self-healing ability. All available maps can be played in one of the four game modes. As the currently available modes feature only minor differences, you will probably feel no difference whatsoever during the game itself.

In the first mode, one of the team has to attack the chosen target, and then escort it to the place shown on the map. The second team has to prevent this from happening. During the attack on the target, and during the escorting, an important thing is to stay close to the target, because if you stay to far, the mission won't progress! If you stay to far from the escorted vehicle, it will stop, and time will work to your disadvantage. This mode can surely use a durable Tank, behind who you can hide and fire at your opponents, while escorting the object.

In the second mode, one of the teams have to attack the designated point on the map, while the other team has to defend it. Once you take over one point, you need to take care of the other. During the attack, it is worth to rethink your strategy, and check the composition of the opposing team (the table with currently active heroes in visible after pressing "Tab" button). If your task is to recapture the point, it is worth to prepare an adequate support for the team, and choose a hero who can restore lost health. When fighting for the opposite team, one of the best defence-suited characters is Bastion - when set in a right moment, his battle configuration can cause a lot of problems for the enemy. In both cases, the game ends when one of the teams take over the points or targets in designated time, or when the defense team successfully defends the points/targets from capture. The game contains a "overtime" mechanic, so if your game goes well and you are close to taking over the designated target, you can receive extra time, to finish the mission. However, it depends on the results of the whole team, so often you only receive extra few seconds - sometimes it is all that is needed!

Control is a whole different mode than the others. There is only one point, on a smaller map, which has to be taken over and held by two opposite teams. The choice of characters should be dependent on the current situation in the game. Once you die, always make sure whether the point is taken by your team, or you have to recapture it first. Choose your character with this in mind. An unique feature of this mode is that it consists of few rounds. The team which wins the first two maps, wins the game.