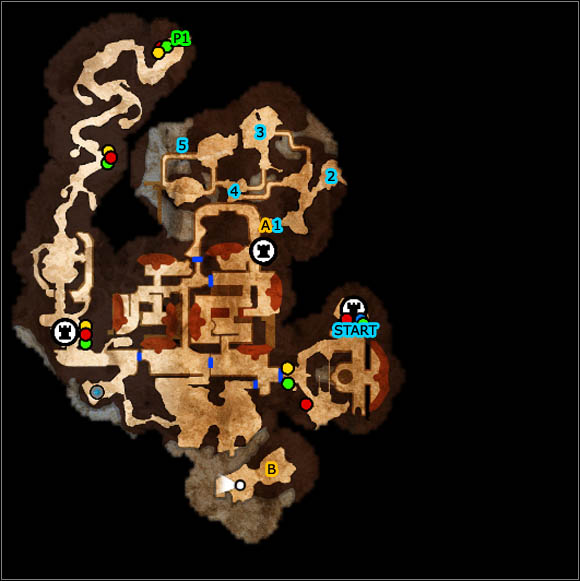 1. entrance to the rebels' hideout;

The woman from Everlight will ask you for listening to her. You'll get some information about the riot which is being organized by the elves. Go to the town to stop the enemies.

Command some Browns and Reds to kill the opponents. You can send some Blues to do that if you have them.

Notice that the paths which lead to the beach and to the jungle are blocked. Follow the only one available path to the door [1] which is next to the teleports. You'll have to blow up two barricades on your way. It's not a problem because there are some barrels with explosives next to them.

The path leads to the spiders [2] (Greens can ride on them) and to platforms with elven bomb throwers [3]. Destroy the platforms and fall back, so you won't get hit by bombs thrown by elves hiding behind a stone barrier.

The bombs explode after several seconds. Pay attention to the stone barricade located on the left. You can destroy it but you need some speed and reflex. After the throwers have thrown the bombs, send one Minion to pick up the bomb and put it in front of the barricade. The Minion will die but the end justifies the means.

You'll have to do the same with the next nearby barricade. Send the green Minion to accomplish that suicidal mission because of the poisonous charge which is here [4].

You'll have to break another barricade which is located not so far away. Use the bombs thrown by the enemies again.

The last group of enemies is standing on the platform [5], next to the bridge which you can pass. I advise you to command your Greens riding on the spiders to attack the bridge (there's a spider web on the left on a rock; your Minions can use it).

You can beat the rebels in two ways. Take control over them by using the magic or kill them. It's your choice.