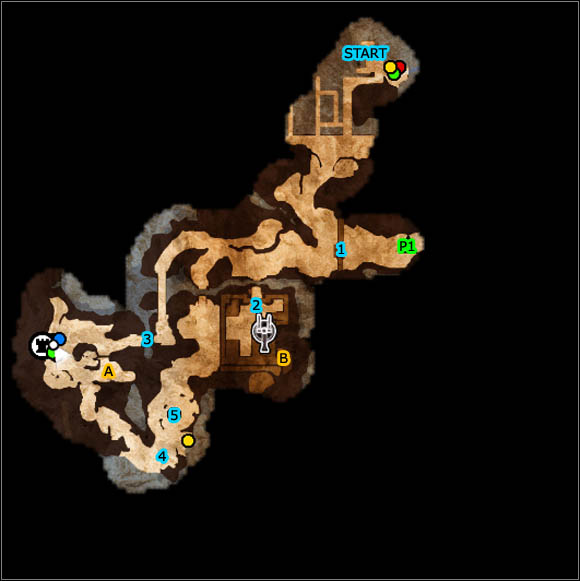 If you take control over the Everlight, you will be able to visit that region. The new mistress, Juno, will give you some information about the Empire Heartlands.

Call five red Minions and Browns. Head for the land and kill all the Imperial soldiers. You'll encounter one enemy force. Set your Minions on the pier and approach the enemies on your own. If they start to chase you, come back to your Minions as fast as you can. The enemy soldiers can't use their battle line on the narrow pier so it will be easier to fight with them. After you've eliminated the legionnaires, kill the archers and go further.

You'll reach the gate to the town [1]. Unfortunately, it's closed. Turn to the side path leading to the Empire's fort [2].

You'll find quite big stone just behind the barricade. You can hide behind it before the catapult's range. You'll find a small bridge on your way. There you'll encounter another Imperial force. If you approach the group of soldiers and then go back quickly the catapult's missile will reach the enemies. Two missiles eliminates all the opponents.

On the other side of the bridge you'll find the knob. Thanks to it you'll lower the swing-bridge [3] which leads to the further part of the stage. Use the knob and cross the swing-bridge. Then you'll be out of catapult's range. Go forward to activate the first Overlord's teleport in the Empire. There's the artefact [A] which increases the number of Minions (plus 5) nearby.

Follow the path to the south. You'll get to the tent where you will find the uniforms of Imperial guards [4]. Disguise 16 of your brown Minions as guardsmen.

There's the Minion possession stone nearby [5] which lets you to take control over one of the Minions. Send at least 16 of your Minions to the stone and use magic to impersonate one of them.

There's a blockade nearby and a hole near to it. The Minions can use the hole. Pass it and pull down the nearby bridge.

The bridge leads to the part of the map where you've been to. Dressed like the guardsman you will be able to get to the fort with the catapult.

Let your Minions use the catapult and destroy the gate of the town (on the right), the barricade which the Overlord has left behind (on the left), and the approaching enemy soldiers (in the middle). The enemies will be gathering in front of the entrance to the fort.

After the vast majority of the enemies have died, return to the Overlord's body. Before you pass the destroyed gate you'll have to do two things. Grab the artifact [B] from the fort to your teleport. You will develop your forge then.

The second thing is to kill the lambs located in the middle of the map. You'll gain some Lifeforce then. They can be quite useful. Head for the town [P1].