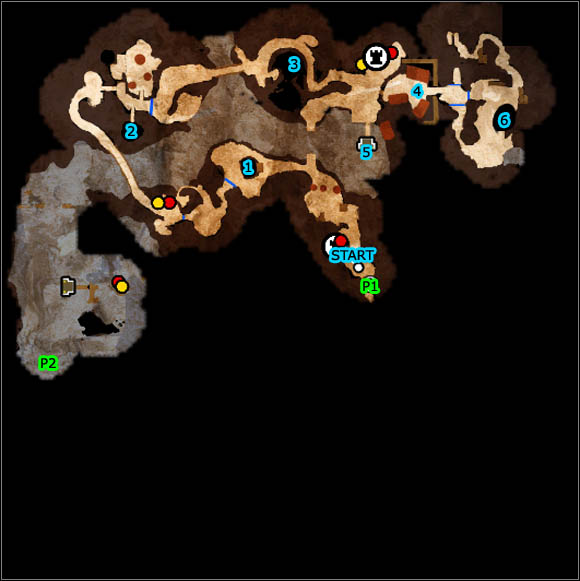 Come back to the Tower after you've taken control of the Nordberg and listen to one of the citizens of the town. He will tell you something about the criminals who walk around the port. Come back to Nordberg, pass the gate near to the teleport and head for the water.

Once you are outside [P1] go ahead and eliminate all the opponents on your way and grab their goods.

You'll encounter three tar pits on your way [1] [2] [3]. There are some gnomes in each of them. Command the Reds to fire the pits. The tar will be burning then.

The second pit is empty but you can fill it by using the nearby knob. If you fire all the pits, head for the village [4]. It's in the next part of the stage.

The ship [5] is held by the ice in one place. You have to get rid of ice then. You can do it in two ways: fire the fourth tar pit [6] or take control over minds of the villagers. You'll find further information about the second way later. Thanks to it you will set the ship free and fix all the hunk.

You'll find only one miserable wretch in the village. However, behind the buildings you'll find the barricades which separate you from another villagers, bandits and gold. Destroy the barricades and take control over minds of the peasants.