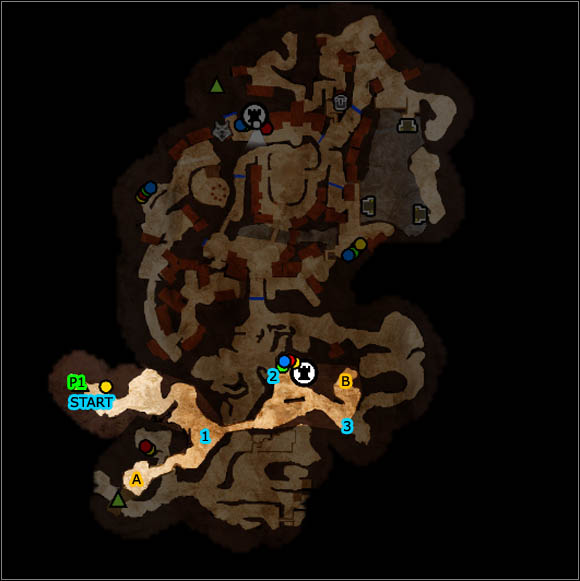 Outside you'll see the spell stone lying on the ground, just next to you. At first, fight the gnomes which you will find there and pick up the spell stone. Gnomes are really annoying because they collect the Lifeforce before you can get them. Therefore, try to kill them as quickly as you can. In addition, the side quest will activate automatically. It's about killing a thousand of Gnomes.

Command your Minions (5 is enough) to take the spell stone after the fight. Keep going. Head for the group of legionnaires [1]. Defeat them, then send your Minions to the next magical object [A]. It's a Command Upgrade, thanks to which your army will be larger.

Pass the bridge. After you have passed the bridge, the teleport appears. Put there all of the spell stones you have found during your journey.

Destroy nearby barricade at the end. You will find one more magical object behind it - it upgrades the health of The Evil Master [B]. Tell your Minions to take it to the teleport. Use the teleport to get to the Tower.