This page of the Outriders guide contains a walkthrough of the Moloch boss fight. You will learn when the fight with Moloch occurs, what attacks you may expect of him and how to avoid them as well as how to defeat him effectively and quickly.

The fight with Moloch takes place during the Push back the Insurgents in No Man's Land main quest. Moloch is the third more serious enemy you will face in Outriders.

Moloch wields the element of fire, deals massive damage and has a lot of dangerous area-of-effect abilities that should be avoided at all costs. 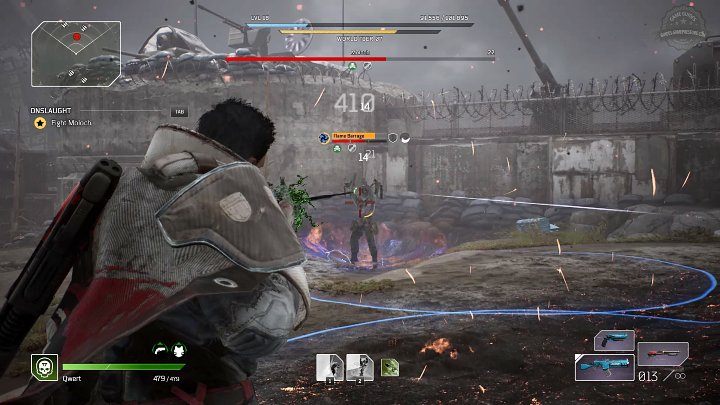 Moloch's first special attack is Flame Barrage - the enemy marks an area where, after a second, three large fireballs will land. Not only do fireballs inflict a lot of damage, but they also apply a Burn status, which additionally drains your health.

This skill works with a long delay, so you can interrupt it or take advantage of the moment when Moloch is preparing the spell, fire a few accurate shots and then jump aside. 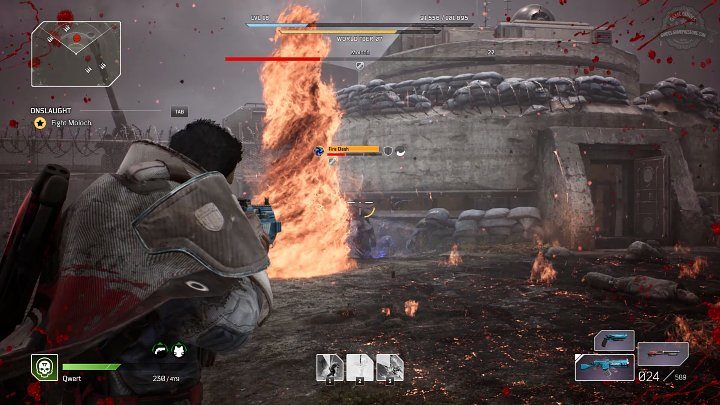 The second special boss ability is Wandering Flame. Moloch creates a swirling pillar of fire that will follow you and move around the arena. If the flame reaches its target, not only will it deal a lot of damage, but it will also apply a Burn status.

The pillar of fire severely limits your vision, which makes it extra dangerous during the boss fight. Moloch can take advantage of this cover and hurl a strong attack at you. 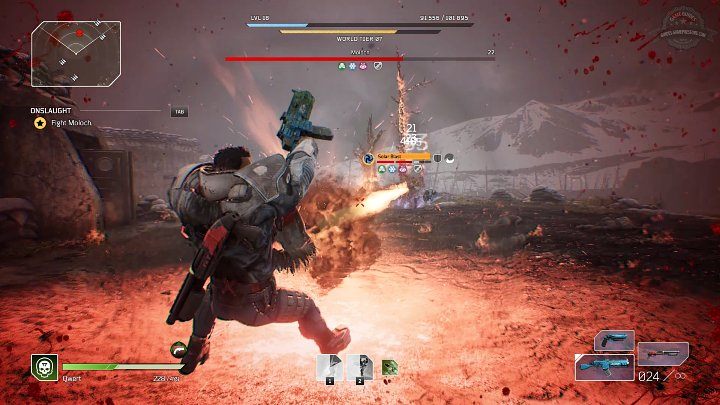 Moloch's third special ability is Solar Blast. The boss concentrates energy and then fires a beam of flames from his hand, which deals a lot of damage and knocks you to the ground.

Solar Blast has a long preparation time, so it can be interrupted or avoided, but it's difficult to sense the right moment to jump away. 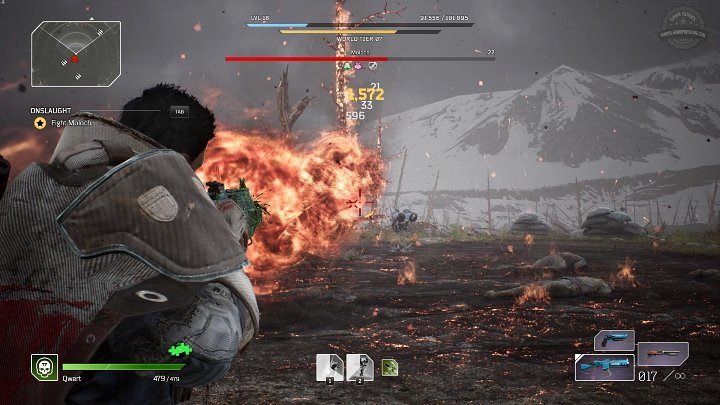 The fourth special boss attack is Fire Dash. Moloch turns into a fireball and rushes towards a selected target - if you stand in his way, you will take a lot of damage. There-materialization of the boss is accompanied by a burst of flames and the ground beneath his feet is set on fire.

Fire Dash is a fast spell that is extremely difficult to interrupt, so be on your guard and quickly jump aside if necessary. 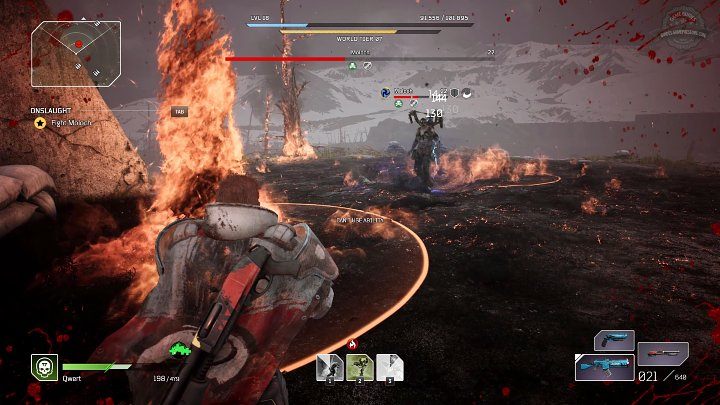 Moloch's last special ability is Immolation. The boss summons a pillar of fire in a given area, which, unlike Wandering Flame, does not move around the arena. When the column of fire disappears, it leaves behind a burning area - the effect lasts for a few seconds. 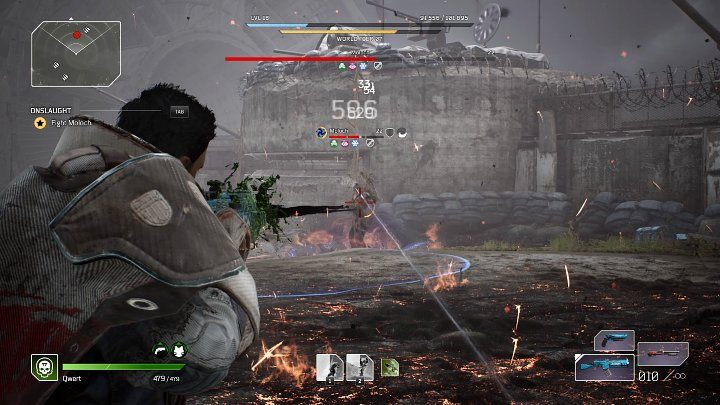 Moloch isn't a very mobile opponent, and most of his abilities operate with some delay, which can be used to fire a few accurate shots. It is recommended to use rounds that put an extra Poison, Burn, or Bleeding status on the target. However, be careful not to stay too long in the area of threat because it can be fatal - it is better to fire three rounds less than to be forced to start the fight from the beginning. 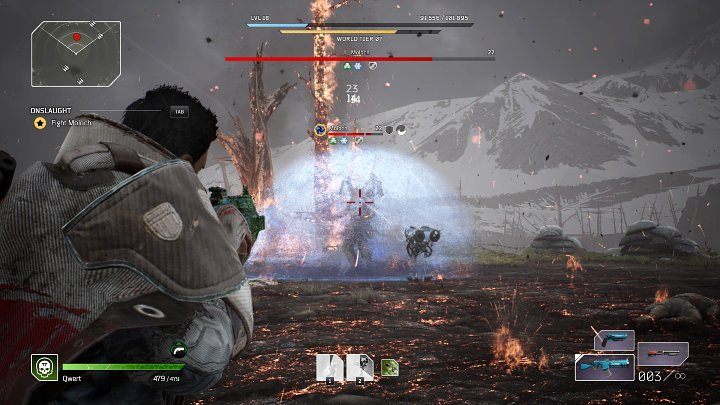 Remember, once you interrupt an elite enemy's ability, for a certain period of time they will become immune to any negative effects that would normally limit their movement. When the opponent is invulnerable, a blue aura will appear around him and you will notice a distinctive blue icon next to his health bar. 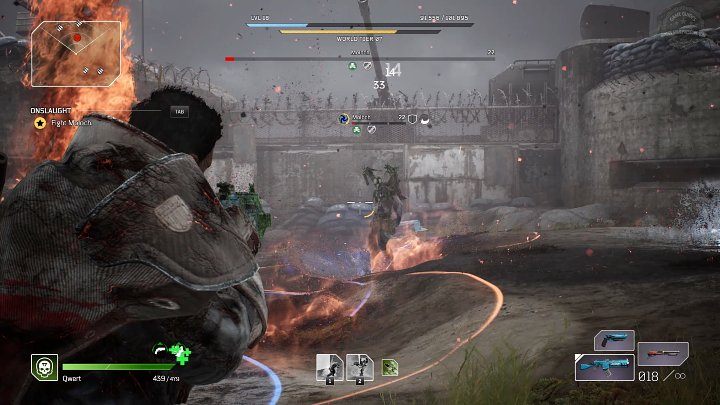 Avoid vulnerable areas when your enemy uses his skills and don't stay in one place for too long. Take care of your character's health. When shooting try to aim for the head to deal the highest damage possible, use your offensive skills and you should be able to deal with this boss in no time.