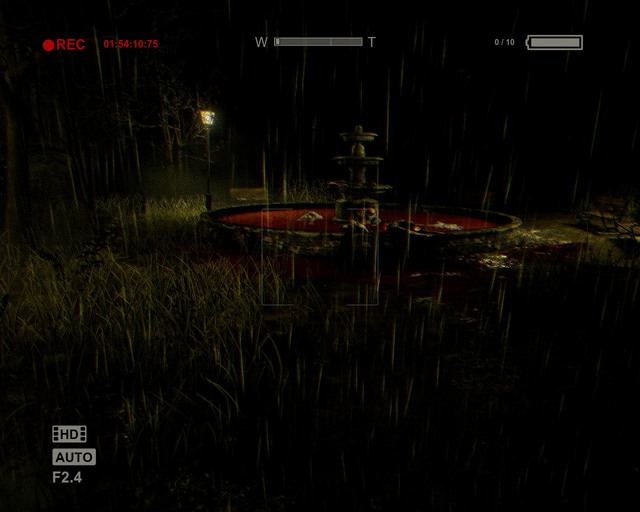 The bloody fountain; the entrance is on the left

You'll receive new objectives. Move towards the door, but turn right half way. Change direction again at the bloody fountain (you can also find a battery there), this time to the right, and you'll see the wooden boxes once again. Climb up them to find yourself back inside the building. 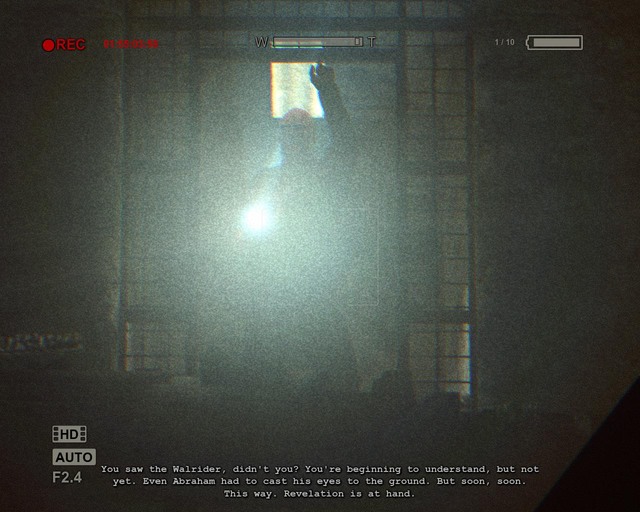 Another meeting with Martin

Turn left and listen to what father Martin has to say to you. Afterwards, turn left, then left again into a corridor. Turn right to see a silhouette of some psycho murderer through the glass. Watch out and continue on. 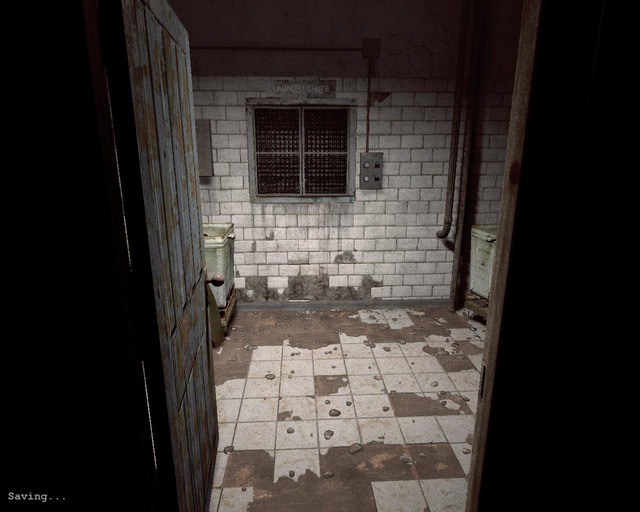 Next, turn left and squeeze through the shelves. Expect to see the patrolling enemy. Go through the window into the laundry room, then immediately go for the door.

Step out into a corridor and look around. On the left there is a room with a battery, so pick it up and head the other way. 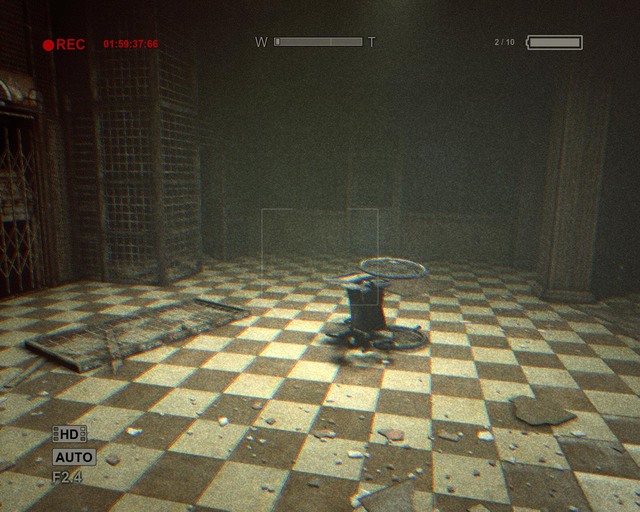 The lit room with the stairs up

After walking through another door, you will have two paths to choose. The one on the right will take you to some documents under the stairs, the one on the left to a large, brightly lit room.

Search the guard's corpse to find two batteries, then go upstairs. You're going to have leap over after a while, but keep going up. 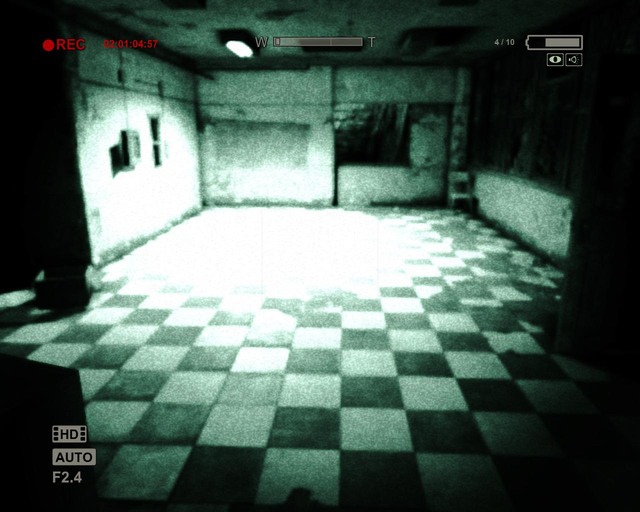 The room behind the window; on the left. the key behind a grate. To open it, you need 3 fuses

On the next floor, turn right and keep going down the corridor until you meet the priest again. Go into the corridor on the left. Keep going along, then jump across the broken window and on your left you'll see a key behind a metal grate. You need three fuses to open it. Jump through the next window to find the first one. 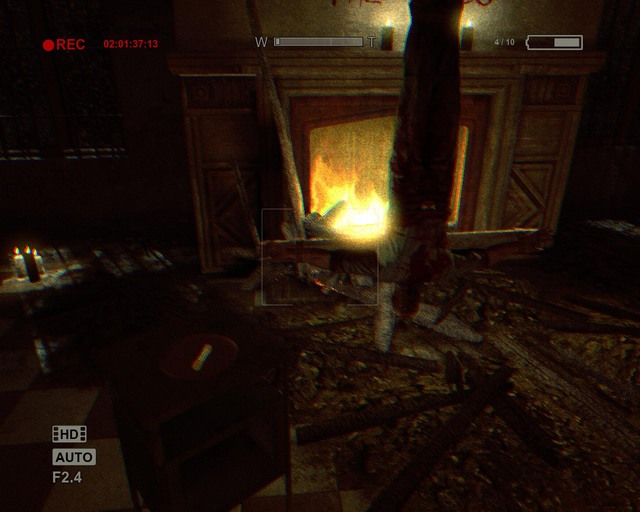 The fuse next to the crucified corpse

Keep going ahead as the path leads you and eventually you'll reach a room with a chimney. Just to be sure, barricade the door behind you, then take the fuse from around the chimney.

Wait a moment, then backtrack to where you jumped through the window, but choose the door this time. After a while, you'll reach a fork in the road. 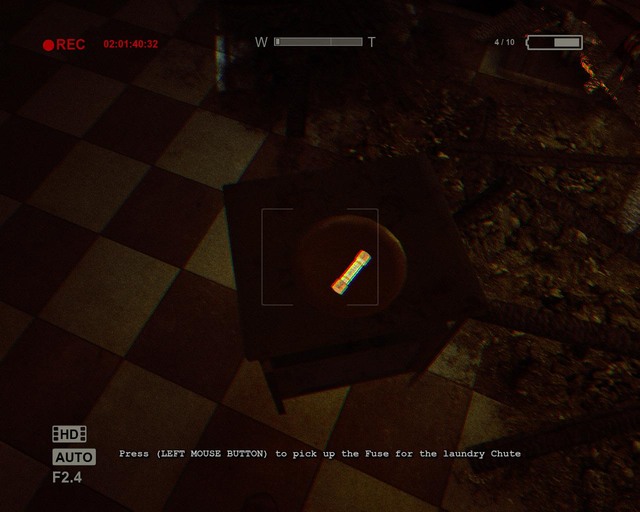 The second fuse in the room on the left

First, go left. Behind the door at the end of the corridor you'll come across a prisoner and the second fuse. As you pick it up, the prisoner will turn his attention to you, but won't attack. 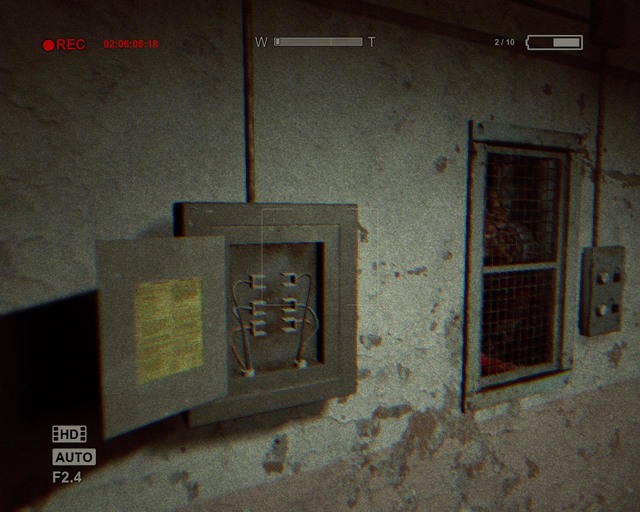 Put the three fuses here to open the grate

Leave the room and make for the other door. You'll find the third fuse in the last room, but you might want to barricade the door behind you before picking it up. If someone starts banging on the door, just wait it out.

Go back to the place with broken windows and insert the three fuses into corresponding slots, then open the locker with the key. Unfortunately, it will fall one floor down, forcing you to run downstairs. 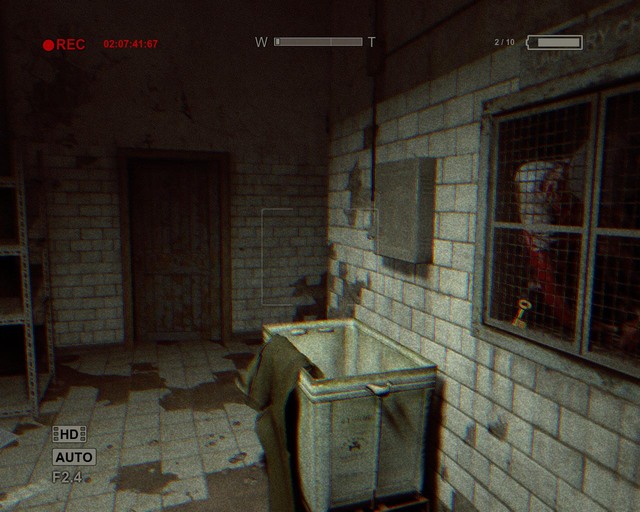 The key fell down into the laundry room

Go back to the room where you found the two batteries and from then, head for the laundry room. That's where you'll find the missing key. 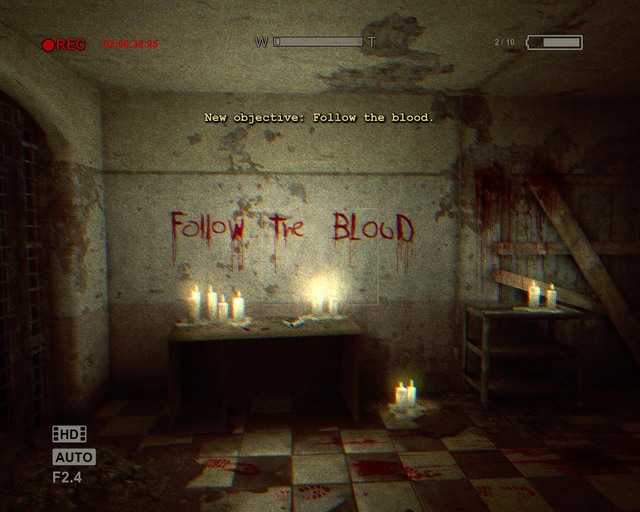 With the key, go back upstairs, and right to your right there's a metal door. This is the one the key was for. Open it and go up.

On the next floor, turn right and follow the blood. The blood will want you to turn right, but if go straight on first, you'll find another battery. 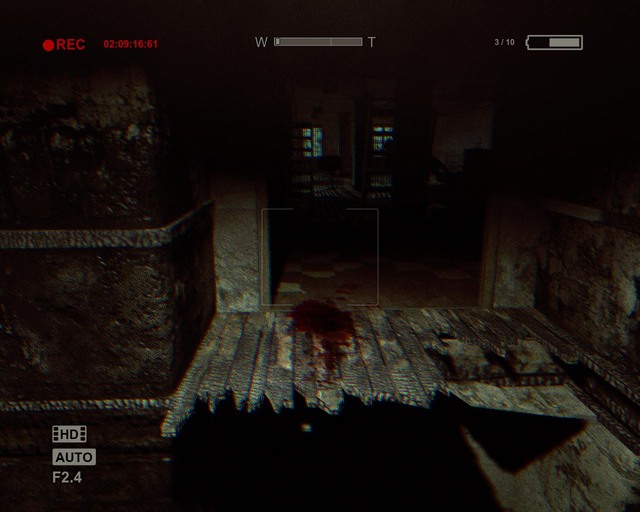 Jump over to the other side

When you turn right, there will be a plank for you to walk on close to the wall. When the plank ends, jump to the other side. You'll be once again in a room with beds. Maneuver between them.

One wrong step will cause the floor to collapse right under you, and another ghost will haunt you. Don't mind it, just use the beds to get back on the right floor. 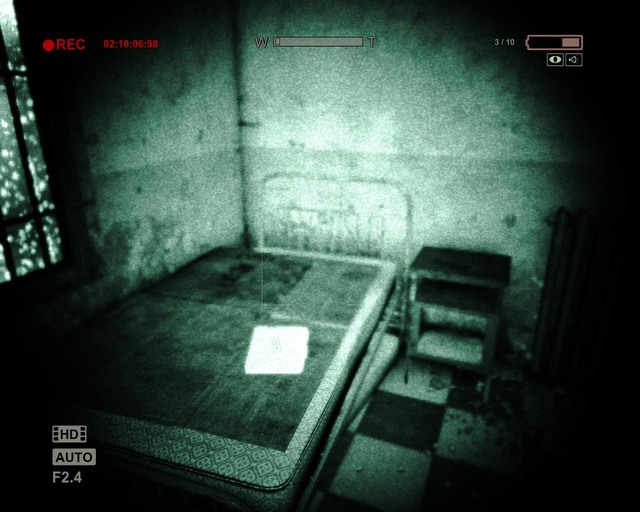 A document on a bed

Go towards the lit door; from the next room, take a document lying on a bed. From there, go forward until you see a broken door. Use them, then run left at the fork. The game will show you further way. Watch the floor closely so as not to miss a battery behind one of the corners. 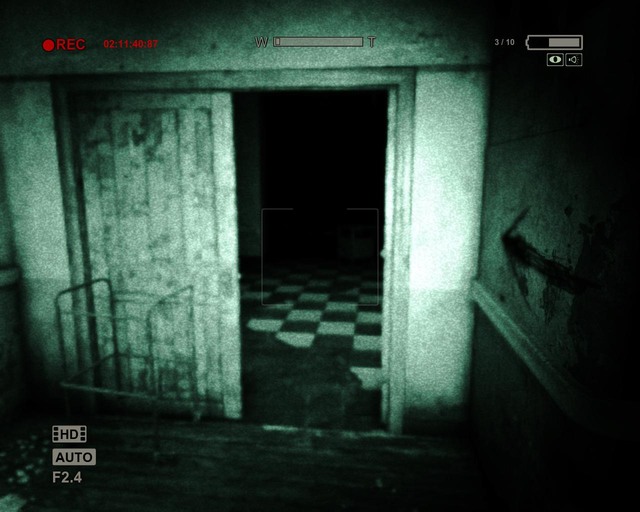 This is the room your buddies came from. When you outmaneuver them, go back here

Eventually, you'll see a passageway on the right. As soon as you use the door, you'll see your old buddies (the ones that wanted to eat you). Move back, drawing them out of the room, then hide in such a spot as to have a view on the door to the previous room, and wait until they start going for it. When they do, make a run for the door they used. 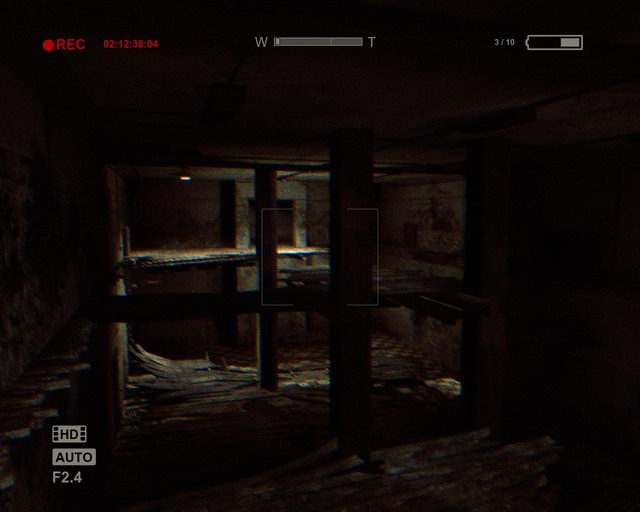 A little jumping never hurt anybody. Get to the opposite door

Look for a door to the next room. Once you go through it, there will some more jumping to do. In the middle of the last jump, your video camera will fall two floors below. 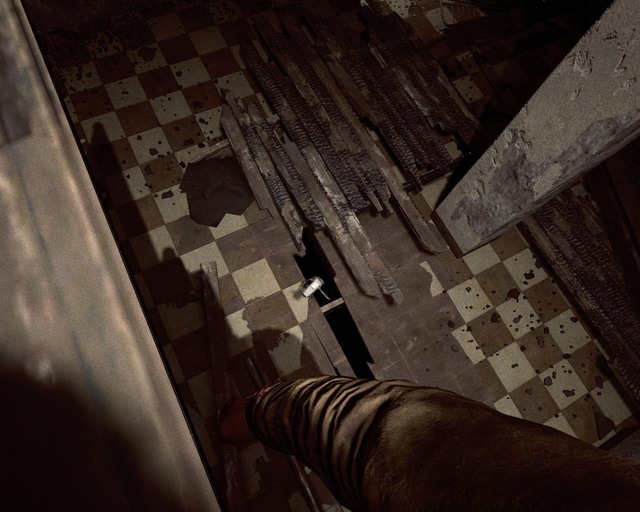 You're going to need to find it, so move back, jump down and go through the passageway on the left. Move through the next room, where you can pick up two batteries. Use the next door. 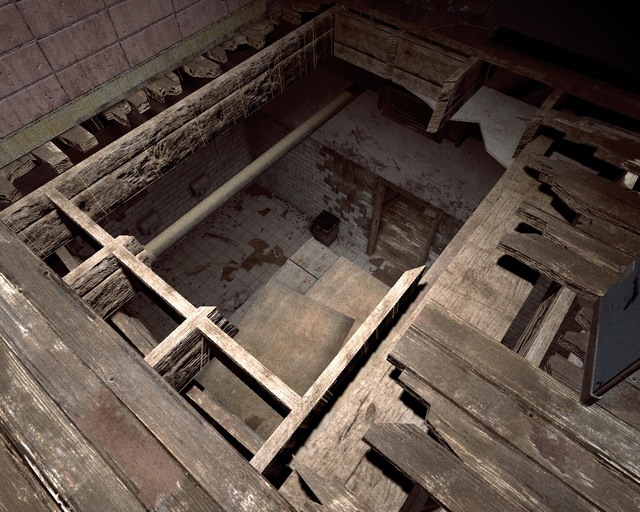 This gap will take you to your video camera

Turn right, crouch and crawl under the planks. Reach the bathrooms a little further along, and the passageway a little to the left of them. Behind one of the blue doors you can find another battery.

Once you're in the right place, you'll see a gap in the floor. Drop down through and you'll be on the same level as the video camera. 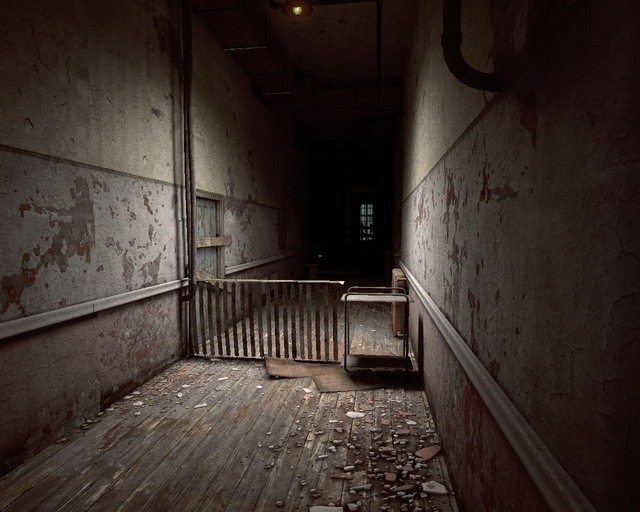 Leave the room and turn right, then right again. Ahead, you should see a knocked over bed, so just jump over it and proceed on. At some point, an enemy will jump you. Move the mouse to shake him off, and he'll run ahead. 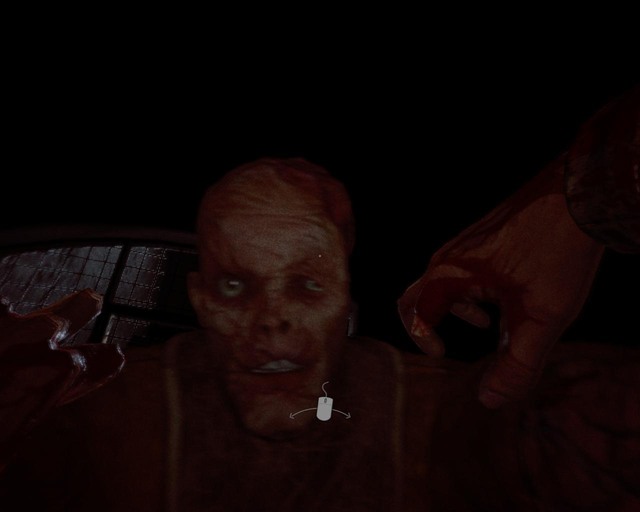 A small argument with a psychopath

After this little argument, turn right, then right again, and finally into the room on the right. You'll finally see your video camera. Take it and start running in the same direction. The escape route isn't any different than the one you used to get here.