In Orcs Must Die! 2 game guide you will find detailed walkthrough of all 15 missions. Additionally every description has map where with key elements. Every level contains two description for normal difficulty level (Battle Mage) and for hard difficulty level (Nightmare). There are also information about all traps, weapons, trinkets and enemies.

Characters - in game you can choose between two heroes - Battle Mage and Sorceress. Different between them aren't very big. Battle Mage has two different weapons (blunderbuss and dwarven hammer) on the other hand only Sorceress can use sceptre of domination. There are also small differences in traps - Battle Mage uses wall of spikes and tap, yet Sorceress can use acid sprayer and ice vent. In guide the main character is Sorceress so you have to remember that if you play Battle Mage that in description ice vent = tap and sprayer = wall of spikes (this traps are very similar in use).

Difficulty levels - main differences between Battle Mage and Nightmare are:

- different enemies on the level;

- only 3 seconds brakes between waves on Nightmare (if you want to sell traps you have to make it in this time);

- all weapons and traps available from start (Nightmare).

To unlock Nightmare you have to finish all levels on Battle Mage difficulty.

Weapons and traps - to unlock some equipment you have to pay for it with skulls. You can get 5 skulls (4 for rift points, 1 for time) for finish every level and find them during the battle (some enemies drops them). It's worth to know that you can reset all skulls in every moment and use them to buy or upgrades other traps or weapons. In order to do it just go to the spellbook and choose option at the bottom of the screen. There is no limit of doing that.

Legend - there are three colors on the maps:

- red (W) is for entrances of enemies;

- green (P) is linked with places where you can set traps;

Adroitness - think and don't give up. In Orcs Must Die! 2 there are lots of ways to beat every level. Guide shows only some of the solutions but don't be afraid of trying your own tactics! 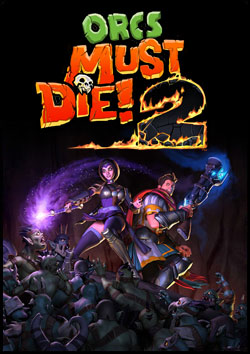 Orcs Must Die! 2 thrusts players and their friends back into battle against a terrifying mob of orcs and other monsters. With a redesigned spellbook, players will have a broader range of options to build a deadly arsenal of defenses. Investing hard-earned skulls in an enormous new upgrade system will allow players to cater to their favorite methods of burning, grinding, tossing, or dismembering orcs.

Orcs Must Die! 2 begins days after the ending of the original game. With the rifts closed and the magical Order dead, the War Mage finds himself suddenly thrust into a new battle against the mindless orc mob. He has a powerful, if questionable, new companion in the Sorceress, an ex-War Mage responsible for the destruction of the Order.

Co-Op! - Play as the War Mage, the headstrong hero who charges into danger, or play as the more strategic Sorceress who keeps the mob at bay with mind-control and magic.

Story-based Campaign  Pick up where the original game left off with a brand new story-based campaign that you can play in Single-Player or Co-Op!

Endless Mode - Play alone or join a friend to put your skills to the test against endless waves of increasingly difficult enemies.

Classic Mode - Steam players who own the original Orcs Must Die! will automatically unlock co-op versions of 10 fan-favorite levels from the original game featuring new enemies!

Over 20 Deadly Enemies - Face an army of vile new creatures like Earth Elementals, Trolls, and Bile Bats. And theyve brought all of your favorite trap-fodder from the original Orcs Must Die! along with them!

More than 50 Traps, Weapons, and Guardians  Choose from an enormous armory of new and classic defenses, including an all new assortment of magical trinkets.

Massive Upgrade System  With more than 225 persistent trap and weapon upgrades to unlock, you can build an arsenal perfectly suited to your slaying style.

Scoring System and Leaderboard  Compete with your friends for supremacy on single-player and co-op leaderboards!

As a special bonus, players who own the original Orcs Must Die! on PC will unlock exclusive content in the sequel.

Orcs Must Die! 2 Game Guide & Walkthrough is also available in our Mobile App