Thes page of the guide to Oddworld Soulstorm contains the second part of the walkthrough of Mission 15 - The Yards. You will learn how to avoid snipers and mines in the Gantry Channel, how to go through the Maintenance section and how to reach the big crane.

Additional note: The green color in this walkthrough stands for secrets and unique locations/activities associated with the badges (challenges) in the game. Mission 15 badges have been described on a separate page of the guide. 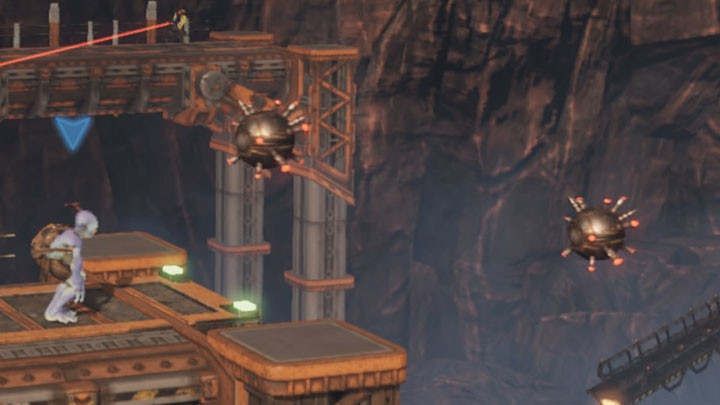 Abe's job is to get to the other end of the large Gantry Channel that's filled with spikes. You need to use three big moving platforms to do this.

The described mission objective has two major obstacles. The first one are the levitating mines. Depending where the mine is, you can avoid it by crouching or performing a double jump over it. 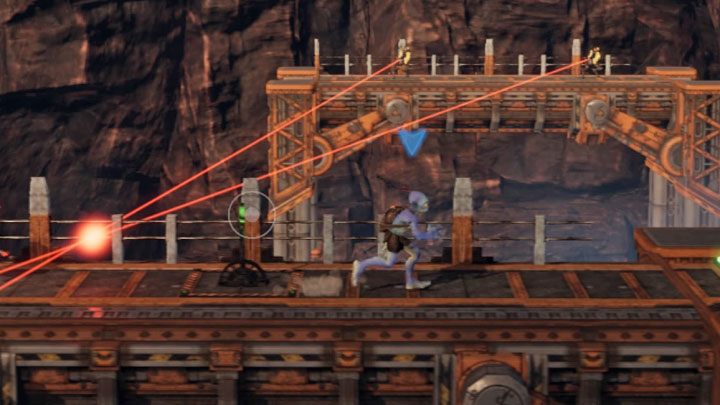 The second difficulty are snipers and your task is, of course, to avoid the red laser sights. You can do this by running around the platform you're currently on or performing double jumps at the right moments.

It should be noted that the game may in certain places force you to avoid both obstacles at the same time. You can try to jump over the mines and laser beams at the same time, or try to do this interchangeably and focus on only one trap at a time.

Find a path through Maintenance 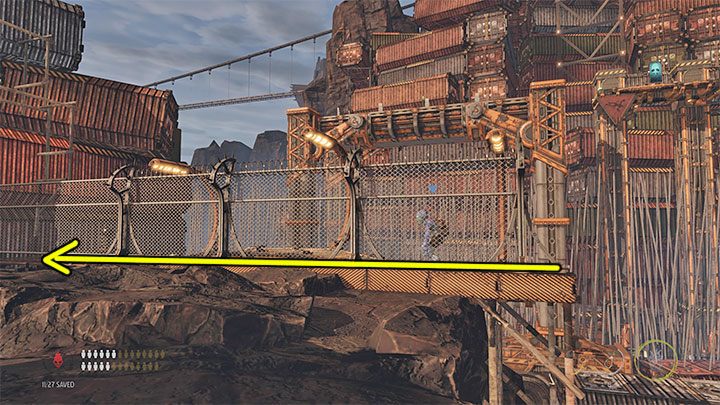 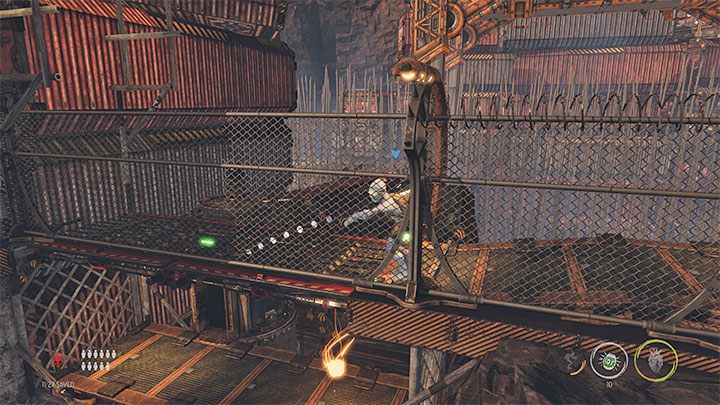 After you reach the other end of the Gantry Channel safely, use the elevator and wait for it to move to the foreground. Head to the left and jump to the top path from picture 1. Go left to the very end and use Fizzy Pow to destroy the metal fragment of the balcony (picture 2).

You will gain access to the lower Secret Area, with a Royal Jelly and a passage to the previously visited part of the cave. If you want, you can buy some more things in the vending machines. 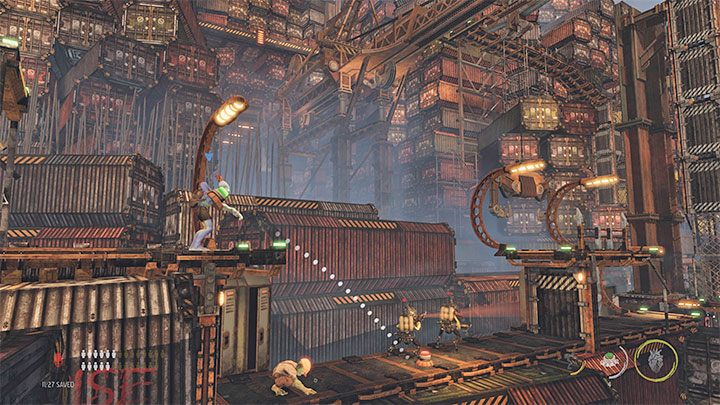 Return to the elevator area and head to the right this time. In the new location you have to deal with Sligs equipped with throwers and to do so, you can use e.g. a Stun Mine or Fizzy Pop/Fizzy Pow.

After securing the area, recruit 4 Mudokons and go further to the right. Naturally, it's worth searching the lockers and containers along the way. 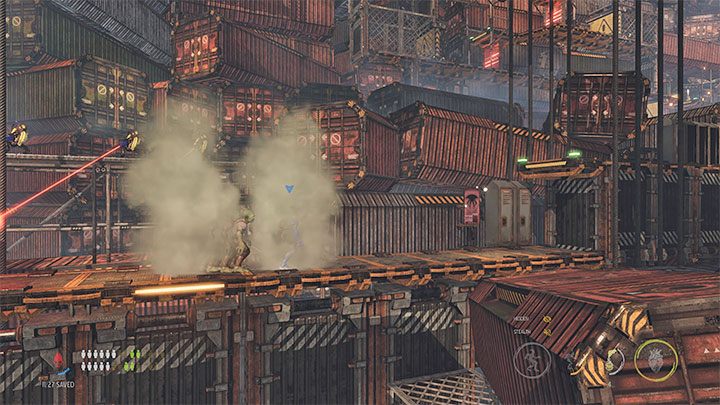 The scaffolding area is guarded by snipers. A good idea here is to use the Smoke Screen and/or Smoke Screen Plus grenades - you should find the ingredients to craft them in the previous locations. Throw more grenades and carefully move to the right with the escorted Mudokons. 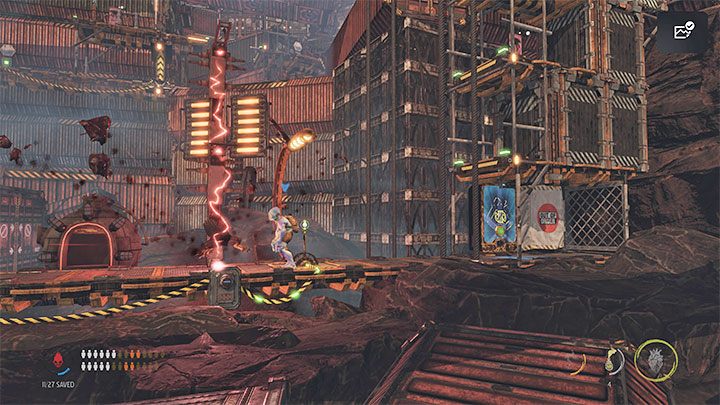 On the upper level, you have to watch out for a new machine with a big smile. Initially, it is best to go right on your own in order to clear the route for your allies.

Pull the right lever - this will cause the Slog monsters to come out of the booth a moment later. Run to the right and pull the second lever so that the enemy creatures fall on the red discharges and die. 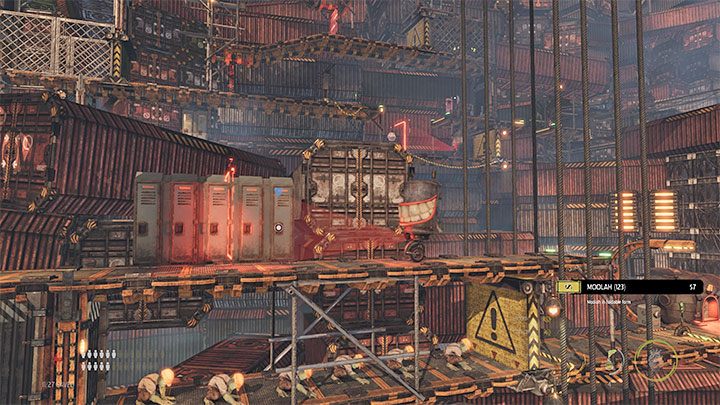 You can now return to the Mudokons that stayed behind. To bypass the big smile machine, you can use the lockers and hide in them with the whole group.

On the lower level you will find the Moolah Gate, which requires a fee of 75 Moolah. If you pay, you will be able to recruit 6 Mudokons. You can optionally use the recycling station and then start climbing to higher shelves. There is 1 Mudokon to recruit in the area - you will find it behind the destructable crates. 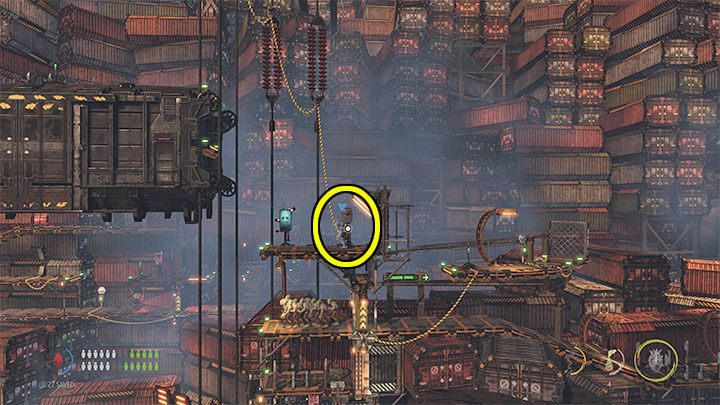 This location features a puzzle with 3 containers that Abe must solve alone. Start by pulling the lever marked in the picture. 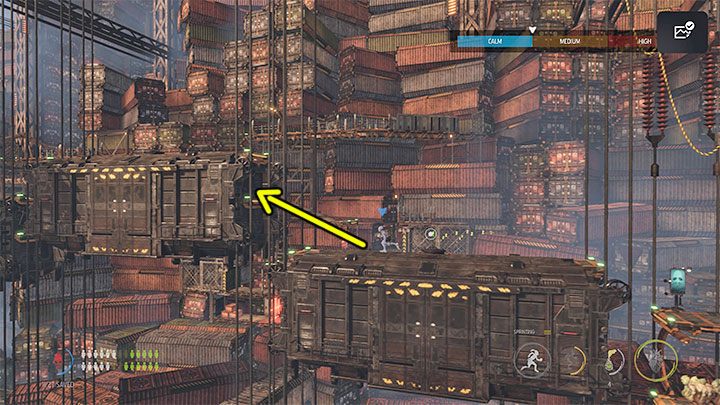 Quickly climb to the left container, sprint on its roof and jump to the edge by the middle container.

If you fail to jump to the middle container, you can reset the position of the right container thanks to the lever on its top. 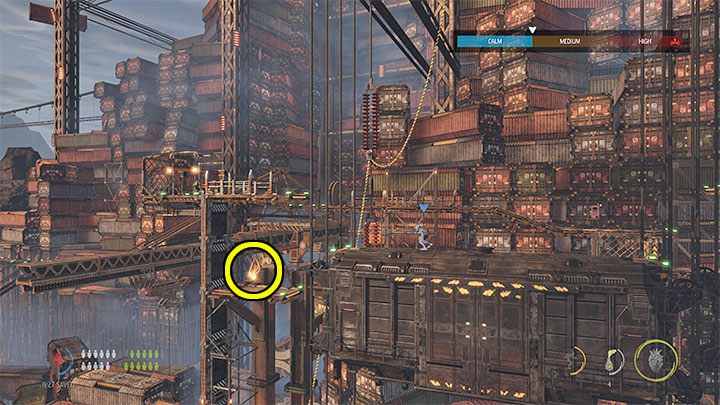 The third, left container should be at the same height as the middle one. Start by getting to the Royal Jelly marked in the picture.

After getting the collectible, reach the moving platform and venture deeper into the screen. 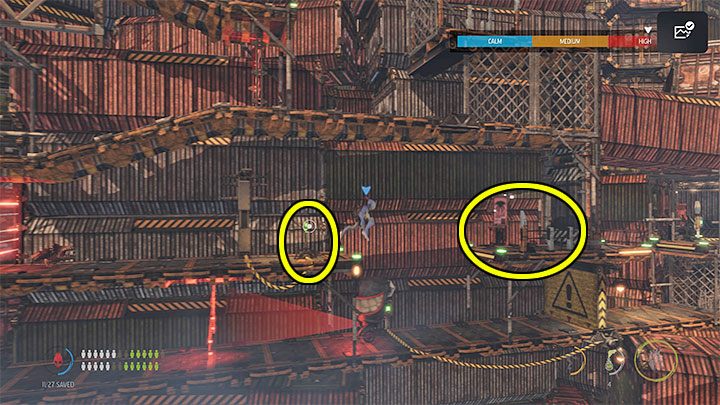 Once you are in the new location, go right. You can first check the upper balcony with lockers. We need to be aware that crossing the red barrier will trigger the escape from Slogs, so you can't stop.

There are two ways you can end the escape scene: 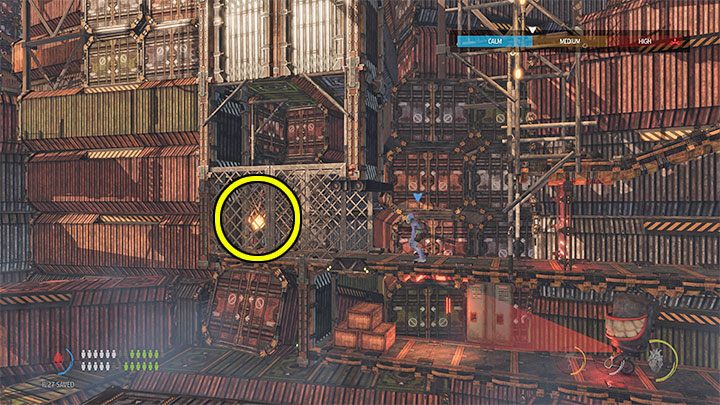 If you want, you can get rid of the monsters that were chasing you and e.g. throw a Brewnade cocktail or cans of Fizzy Pop/Fizzy Pow at them. This will allow you to inspect the recent escape route. In the cage on the lowest level you can find the Royal Jelly visible in the picture. 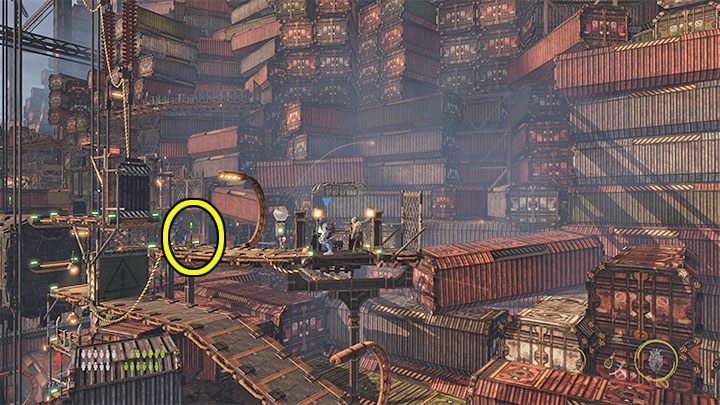 The lower level is patrolled by another big smile machine. You can examine the area on the left (lockers and crates) and press the button to lower the blockade. Interact with the new moving platform, which will bring you back to the foreground.

Recruit 1 Mudokon and interact with the lever to release the blockade. You can now summon all the Mudokons that stayed behind.