On this page of the Oddworld Soulstorm guide, you can find the second part of the description of level 13's passage - the Escape mission. Our solution tells you how to properly protect escaping Mudokons in locations from holding pen 5 to holding pen 1, as well as how to leave the area and board the train.

Additional note: The green color in this walkthrough stands for secrets and unique locations/activities associated with the badges (challenges) in the game. Mission 13 badges have been described on a separate page of the guide. 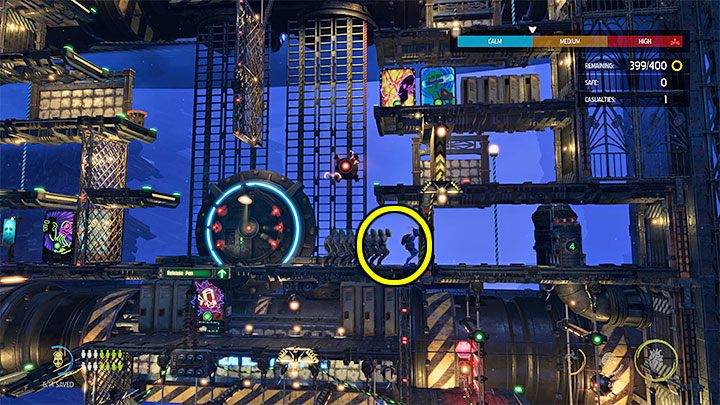 We will reach the level Holding pen 5 by elevator and, unlike level 6, we will face an encounter with some Sligs. Before you get to it, it is worth looking around the area. We can collect loot from cabinets and containers, and take an interest in vending machines. Abe can recycle empty bottles, pick up free Rock candy, and buy Fizzy pop, gum and blastos.

In the central part of this area, there are 2 Sligs, which are worth getting rid of (possibly by stunning and tying them). We recruit 2 Mudokons from the surrounding shelves and place them on the bottom right pressure plate marked in the picture. Like on one of the previous floors, this will activate the lock and prevent some Sligs from reaching the arena. We don't have to leave all the Mudokons here - we can hide some of them or give them some gadgets so that they can partially defend themselves. 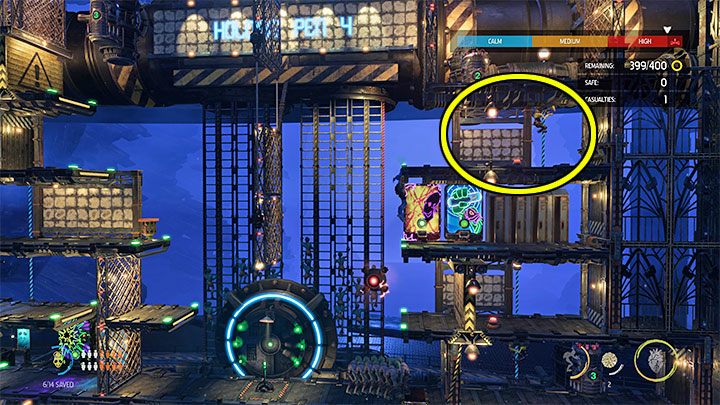 After pulling the lever, we first focus on stunning the Sligs that appear in the upper right corner of the arena. Alternatively, we can plant stun mines there and let them take Abe out.

We're focusing on personally attacking the flying Sligs from the central area, preferably before they spot the Mudokons from the pressure plate. Unfortunately, we can't use possession here, so we routinely stun our opponents when they return to full strength. 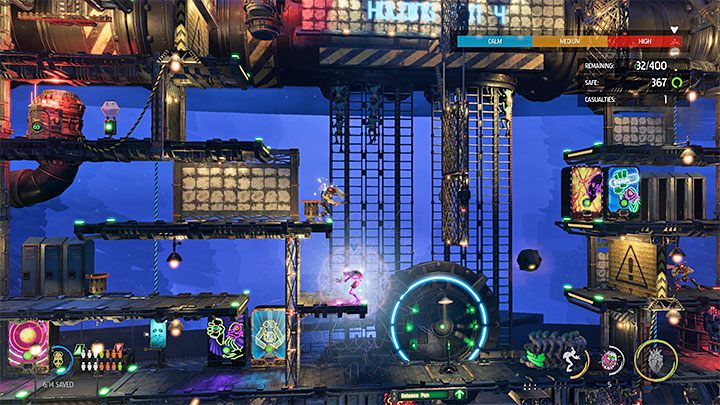 In the next phase of the confrontation, we focus on the left area, where standard Sligs may appear. Due to the fact that the Chant Suppressor device is far from the left shelves, we can already help ourselves with the use of possession. It might be a good idea to use the possessed Slig to attack and kill other opponents. 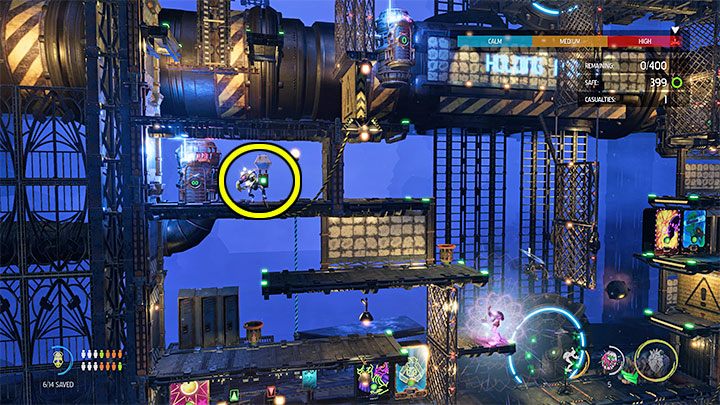 After the fights are over, we must use the possessed Slig to reach the upper left button. We can already summon the Mudokons (beware of the Sligs gathered at the recent blockade!) and start climbing towards the Holding pen 4 floor. We get there by elevator.

There is a possible scenario that the flying Sligs attacks led to The Binding of Abe's brothers and sisters. First, we defeat/stun the flying enemies and then, one by one, release the allies so that they can move on with us. 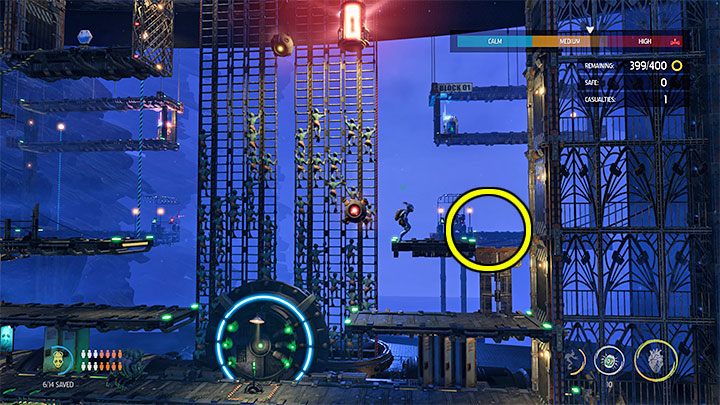 On the new floor, we traditionally start by examining cabinets and interactive containers. Allies will not be needed in the new battle and can even make it difficult to claim victory if they find themselves in the crosshairs of flying Sligs. It's best to hide them in the lower hallway.

We pull the lever and first we focus on the right shelf marked on the picture. This place will reach the "elite" Sligs, and before that attack candy flying Sligs. The elite enemy is best knocked out with the help of fizzy pow / fizzy pop. We can also kill him, for example, using fizzy POW for the second time, but it is best to do delay the attack. 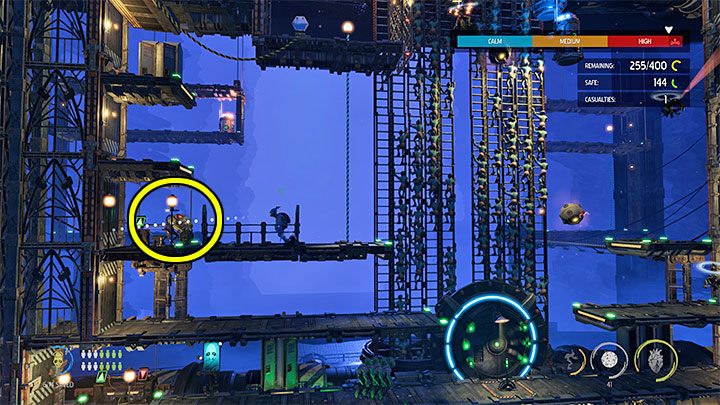 Abe needs to be interested in the left shelf of the picture next. In this place a Slig will also arrive from the background, while it will be an ordinary opponent. We can knock him out, kill him, or tie him up.

From now on, we must move between the confines of the arena and neutralize the slugs reaching the platforms, while avoiding the shelling of flying Sligs. 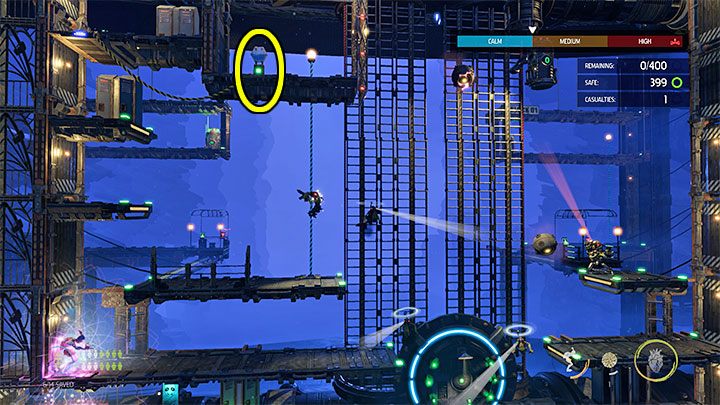 After all the Mudokons have escaped, we hide in one of the lower corridors and use possession on the left Slig. We can use him to fire on all other opponents (if he dies, he will appear as a "successor" after some time) and to climb the pole to the top shelf with a button.

We return to the Mudokons, recall them to ourselves, and head towards the newly unlocked upper exit - it is on the left side and we have to jump to higher and higher shelves. We'll find lockers to examine along the way. We're using the elevator to get to Holding Pen 3. 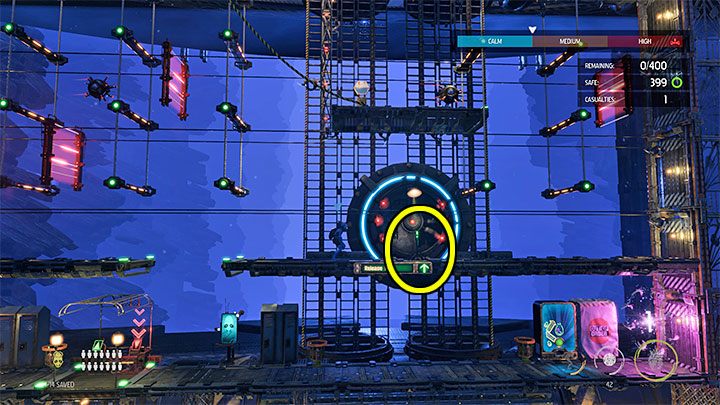 Let's start by examining the lowest level. At its right end is a bird portal. Sending him back to command the Mudokons can unlock another load of Shrykull power. We'll find a recycling station and lockers.

For the second time, Abe will be forced to avoid traps. We start by pulling the bottom lever. 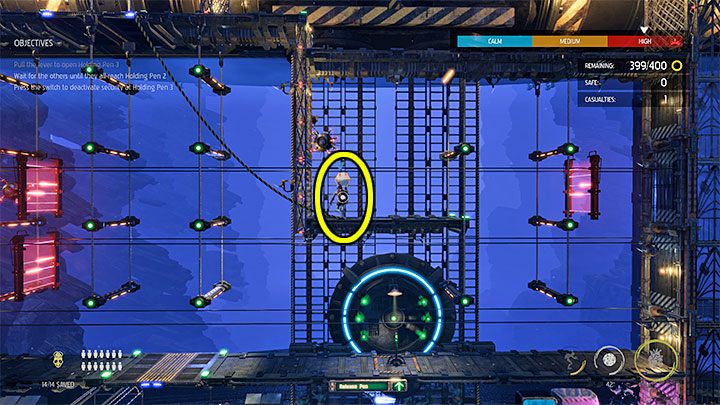 We need to reach the area above the lever where the button is located. As before, avoid contact with mines and remain motionless at the moment of possible contact with the red barriers. 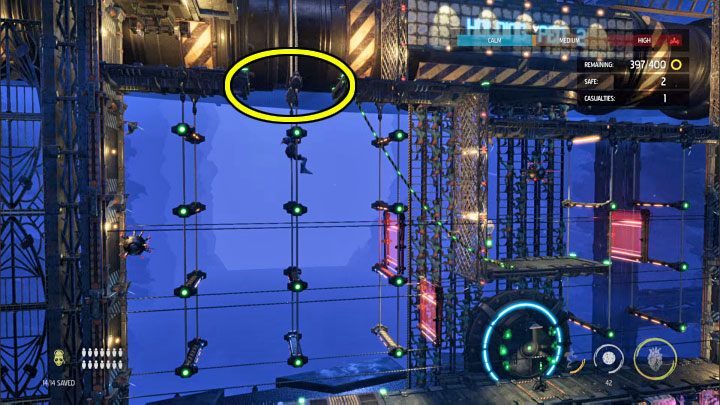 The most demanding is the last bit, because we need to reach Abe to the upper left hole. We need to perform the double jumps correctly and control Abe in flight if necessary.

We wait until all the Mudokons have escaped and use the elevator to travel to Holding Pen 2. 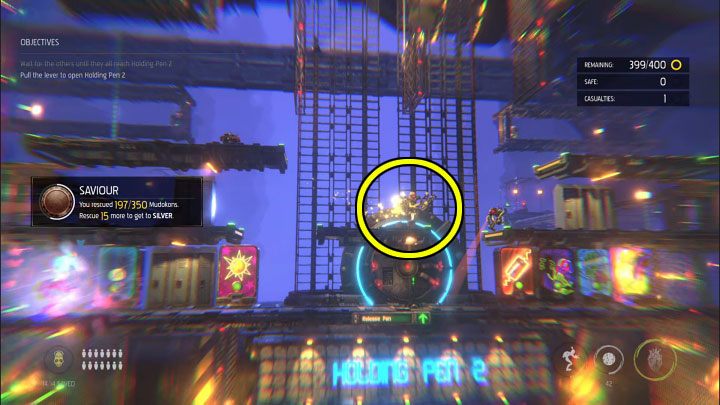 At Holding Pen 2, there are 3 opponents by default and we don't get rid of all of them. We use possession to take control of the middle enemy with a minigun, and we use this weapon to kill his two friends. We then stun the Slig with the minigun in order to be able to use his services in the future. 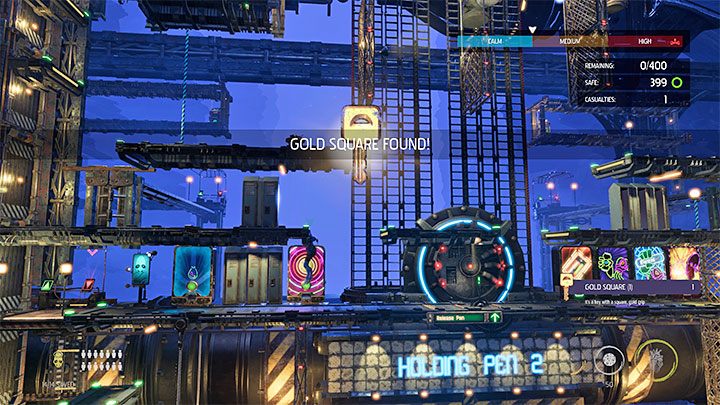 We can take a quick look around the area. In addition to cabinets and other containers, there are plenty of vending machines. Abe can pick up Rock candy for free, as well as buy Battery, Fizzy pop, Blastos and Gum. This can help us to create many gadgets, including a flamethrower. By searching the enemy with the minigun, we can also get the gold square key - it will be useful for opening lockers in all stages of the game. 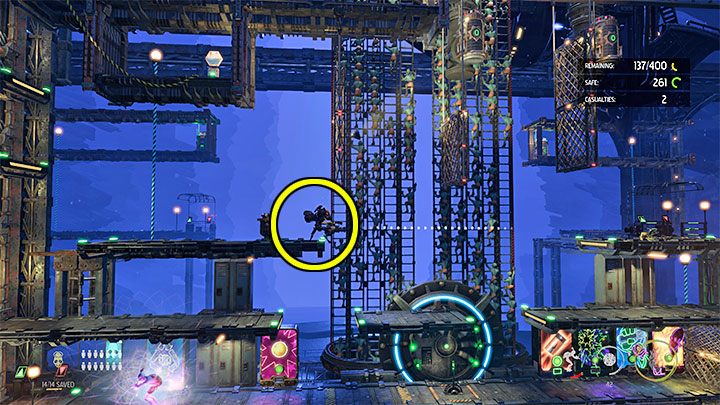 We pull the lever, hide downstairs, and re-use possession on the enemy with the minigun. We use his weapons to eliminate all enemies that appear.

Over time, it is worth getting rid of the possessed enemy and using the possession on the second enemy with the minigun from the upper left shelf (pictured above). It will have a better field of view and easier to reach the top button after the end of the fight. 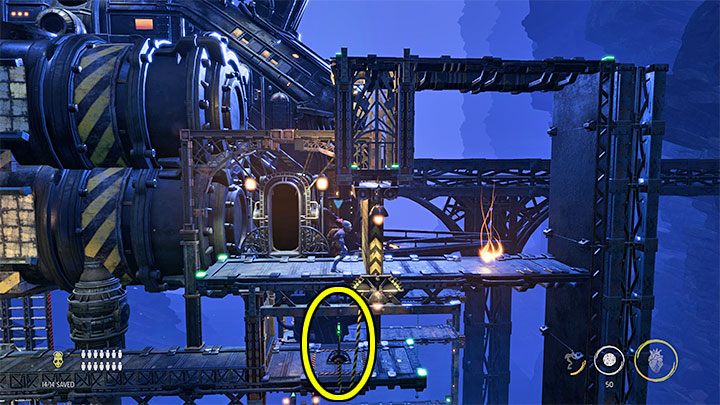 Additional note - if we want to get 100% secrets in this mission, then let's not kill all flying Sligs. Let's take one of them and put it in the top right corner. There is a lever shown in the picture. Pulling it will allow Abe in the final mission to reach the secret area and get the secret royal jelly. 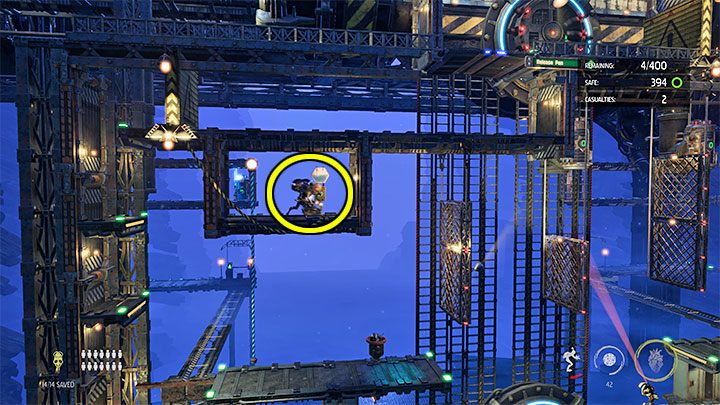 After all the Mudokons have fled, we climb as the elite Slig onto the left pillar. This way we'll get to the button.

We can go back to Abe's control now and go for a left-hand climb.

Pull the lever to load everyone on the train 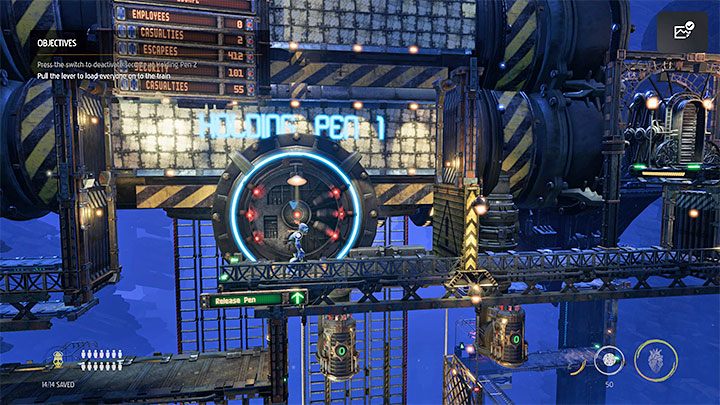 There will be no more fighting on the top floor. We pull the lever to finally save the Mudokons (the highest platinum badge is awarded for saving at least 350 of them).

We can already use the right entrance to the train.

If, as previously suggested, we unlocked the passage with a flying Slig, then before we leave the mission area, let's not forget to explore the secret area and take the Royal Jelly secret.