On this page of the Oddworld Soulstorm guide, you will find the first part of the description of how to pass Mission 11 - The Mines. Our solution tells you how to restore power to the elevators and machines in the mines, how to pass level 2, how to open the Moolah Gate, and how to avoid snipers in Power Station 1B.

Additional note: The green color in this walkthrough stands for secrets and unique locations/activities associated with the badges (challenges) in the game. Mission 11 badges have been described on a separate page of the guide.

Power up the mine elevator 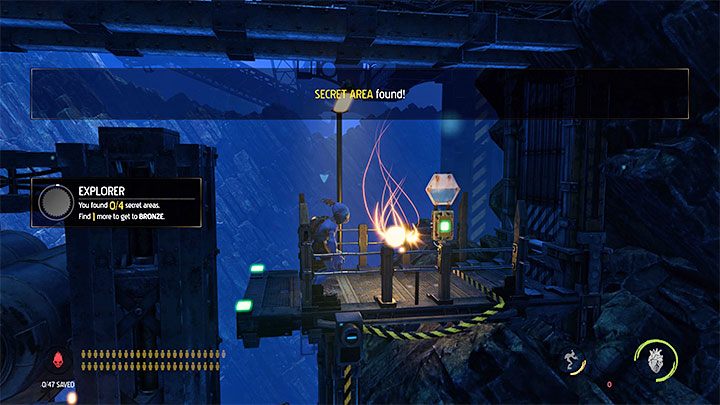 We begin the mine exploration by going to the right. We jump to the top shelf - this way we will reach the secret area, which contains the Royal Jelly secret and an interactive button to restore the power.

We return to the starting point and go to the left. We pass the elevator, which is inactive due to the lack of power. To the left of the elevator, you will find binoculars (optional interaction) and a slot machine with free rock candy. Going further to the left, we find the elevator start button and the lockers we can search. We can use the elevator now. 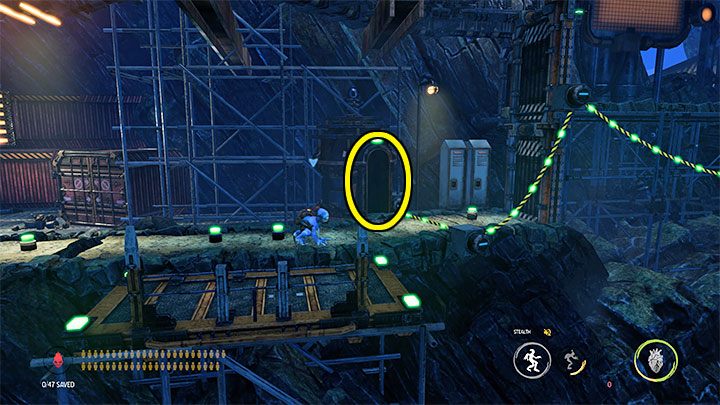 The elevator will transport us to Level 1. We move to the left and carefully jump down to the lowest level. There are mines here that we can deactivate, one by one. This will allow us to reach the new lockers, but above all, the entrance to the secret area marked on the picture.

In the secret location, we can find the Royal Jelly secret, interactive containers, and lockers (they have padlocks - a key is required). 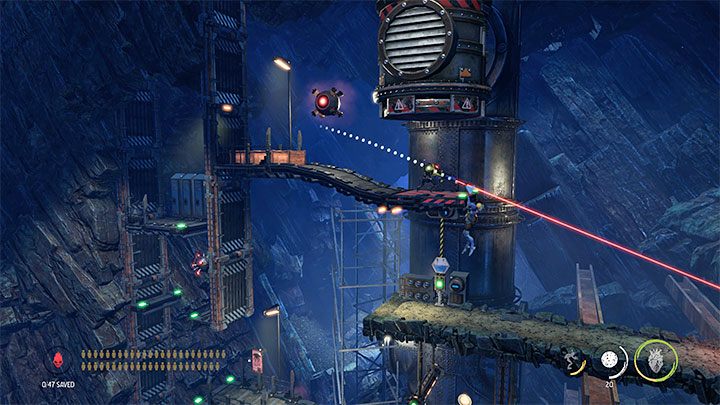 We leave the secret area and head to the left. We can optionally explore the lower area - sneak past a Slig, turn off the new mine and search the lockers.

Going further to the left, we need to watch out for the sniper watching the path and reach the shelf below him as he goes to explore the areas to the left and right of the path. We press the button. The sniper can be ignored or stunned (eg. the usual candy rock candy), which lets us examine the boxes on the left.

Scavenge Moolah to get past the gate 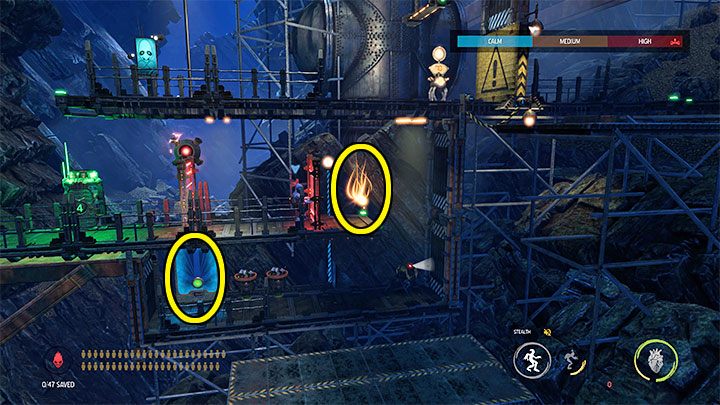 This location has the first moolah gate, which requires a payment of 70 moolah. At this stage, collecting the required cash is more difficult and we always need to look more closely around the area:

After we have collected at least 70 moolah we return to the gate and unlock the passage.

Power up the machines in your way 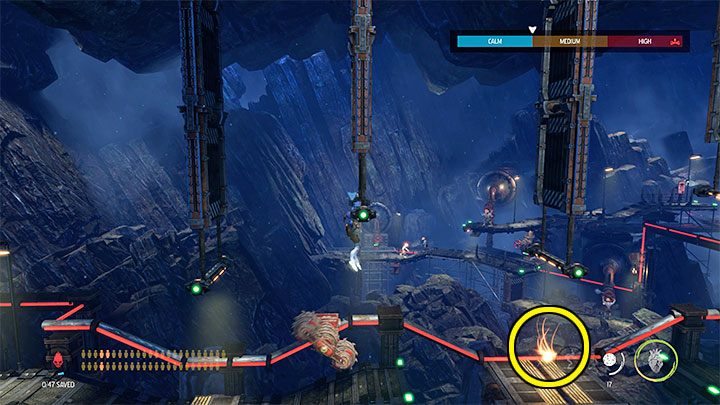 We leave on the right from the moolah gate. We will reach a blocked passage, which forces the restoration of power supply to the surrounding machines. We use the entrance to Power Station 1A.

In the new location, we head to the right and pay attention to the scanner - we can sneak in without having to use the Smoke Screen grenades. We pass sleeping slugs along the way. When crossing to the right, we use the monkey bars to avoid traps. Abe can get the Royal Jelly secret marked on the picture, but we need to be aware that the floor collapses every now and then near the spot where the secret is. We wait for the right moment, catch the secret and quickly jump to the nearest pole. We finish crossing to the right. 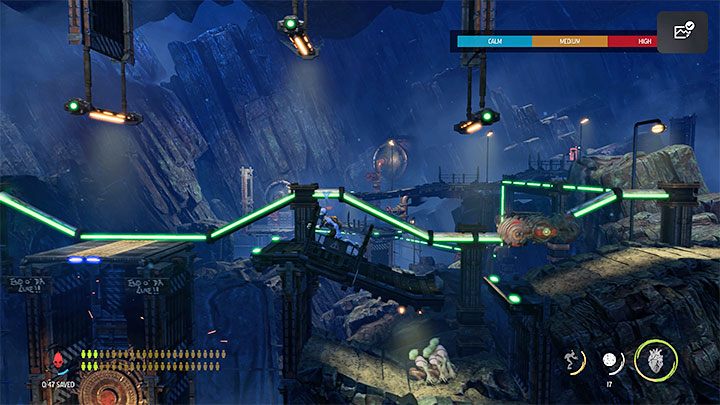 We reach the mobile platform, on which we can go into the depths of the screen. We'll meet 6 mudokons here to recruit. We're taking them back to the launch site.

Withdrawing the recruited mudocons from their workstations has resulted in the blades that we passed earlier on their own now working much more slowly. We still have to hide along the way in the lower areas and wait in there until it is safe to go up and go further to the left. Let's also remember the trapdoor where the secret was. We jump to this platform as soon as it rises and we quickly lower it. 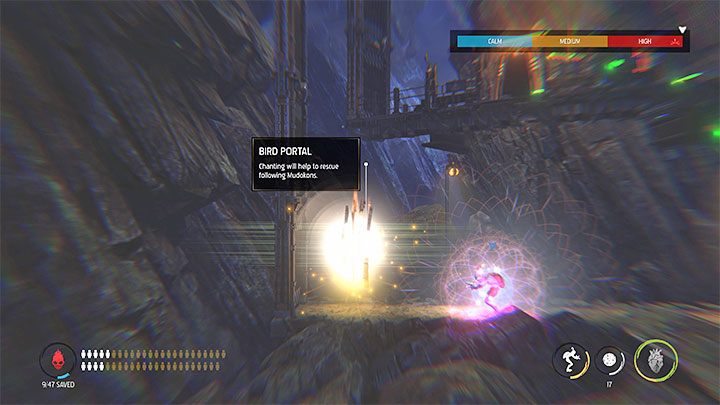 Once we get close to the Sligs, we can recruit three more mudocons. We're hiding all our allies in the steam zone.

We're waiting for the right moment to turn left and avoid being crushed by a running machine. At the very end of the left path there is a Bird Portal, with the help of which we send all Mudokons. 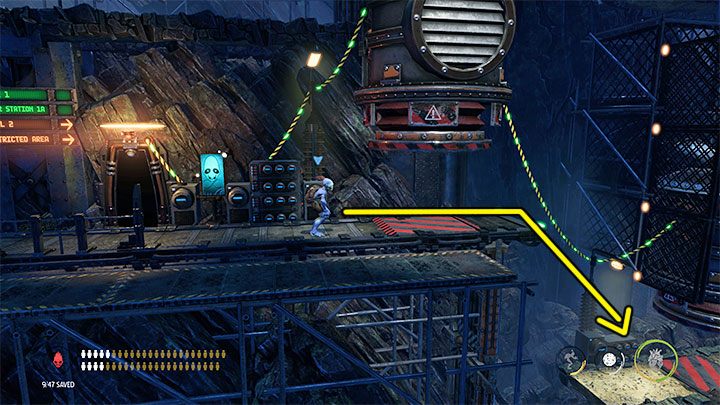 We can leave this location now. After returning to the previous area, the right passage from the above image was unlocked, and we must be careful of working machines, which should be treated as traps. On the way, it is worth exploring the optional areas, as there is various loot in them. 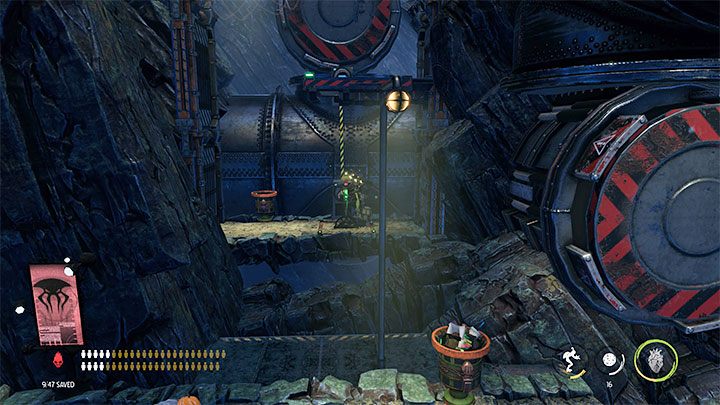 Soon we will reach some more inactive machines that are blocking further passage. We're using possession to take control of a Slig that's sleeping downstairs. We can then give him the command to pull the lever.

We move on. In the next location, we personally go down to the lower shelf with a new lever - pulling it will also lead to the appearance of red discharges. We wait until it is safe to climb the mountain and continue the crossing. 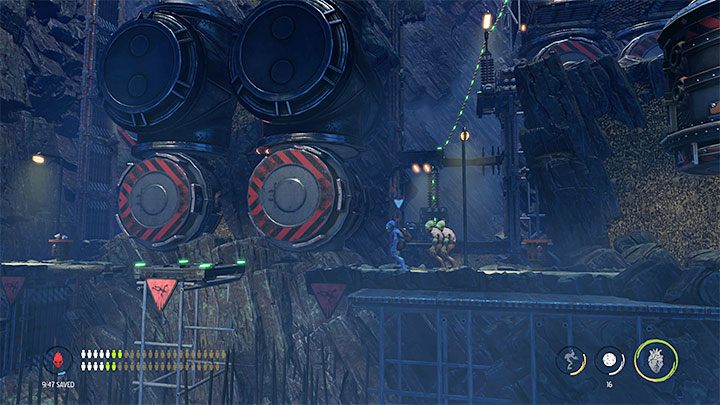 In one of the following areas there are 4 Mudocons to recruit. We go with them to the left and take care along the way that they are not crushed - we run with them just after each machine moves up. A particularly problematic section is the one shown on the picture, in which huge cylinders protrude. We need to perfectly choose the moment of the jump on the small middle shelf (we can also hang there for a while) and then jump again to the left track.

In the new location there is 1 Mudokon to recruit. We pull the lever, bypass the trap and recruit another 1 Mudokon. The second lever is best pulled after stopping the group in advance, because soon after using it, the trap is activated and Abe all by himself will be easier to evacuate from the danger zone. 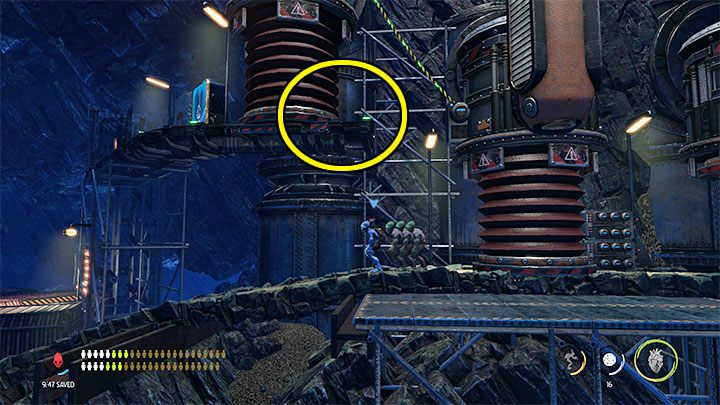 We stay in the place where the last trap was and jump to the top left shelf of the picture. It will lead us to a recycling machine, cabinets and boxes to destroy.

We go back down. To the left of here is a bird portal - we save our colleagues.

Power up the elevator to Level 2 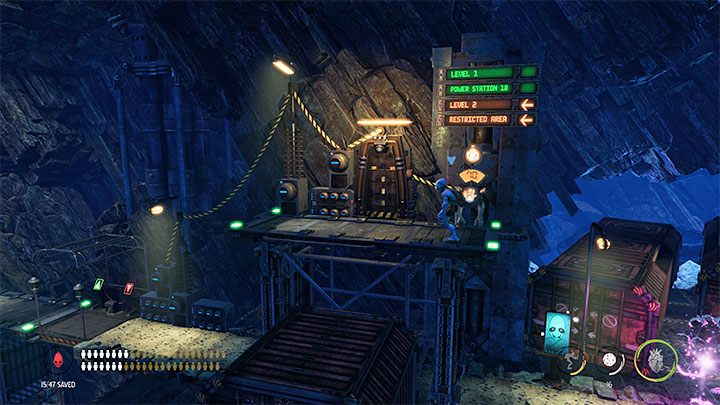 The main character will reach the second Moolah Gate. It also requires a fee of 70 Moolah. Fortunately, if we have already visited the mentioned empty bottle recycling station, then we should have the required amount. We're using the transition to Power Station 1B. 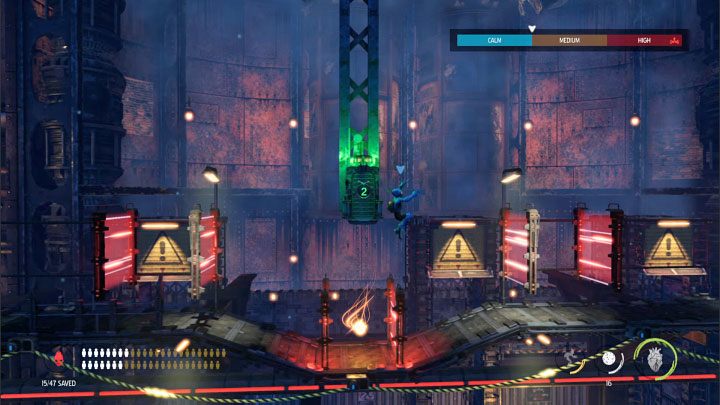 In the new location, our task will be to press three different buttons in order to restore the power supply to the elevator. We head to the right and look for the next red barriers that can activate the alarm - this is undesirable, because there will be flying Sligs, which in such situations it is best to get rid of. We can roll under the barriers, or we can stop and let them pass Abe.

We can now take the royal jelly secret passed on the way or become interested in it only on the way back. 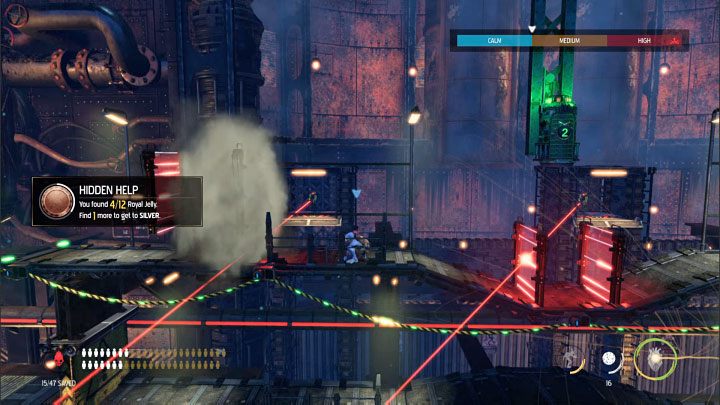 We reach the button in the upper right part of the room - pressing it will lead to the appearance of snipers. Avoiding snipers can be very troublesome:

We head to the left, avoid a single trap and pull the lever. 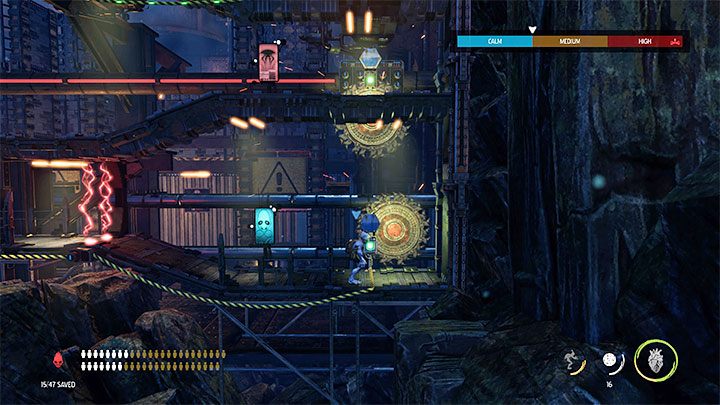 Now we're going to examine the lower path going to the right. We watch on the way to the red discharge and reach the button. In the distance new snipers appear, however avoiding their attacks will be easier now. A large rotating blade will begin to move to the left. We need to remain hidden behind it , since it acts on the principle of a shield deflecting any possible projectiles.

In the lower left part of the room, the passage to the new lever has been unlocked, but again, we need to be careful of the working machine. 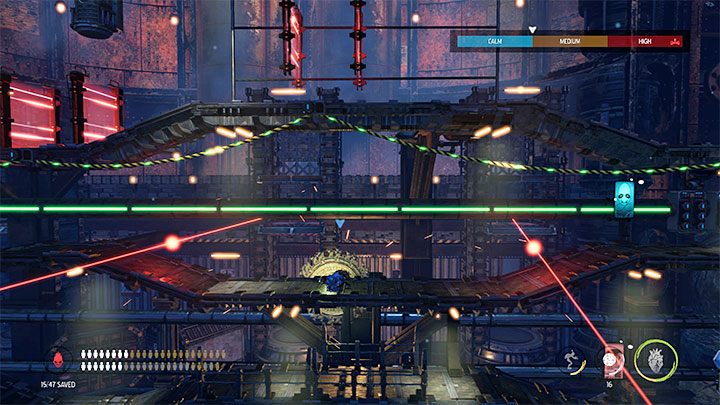 In the end, the middle path is the one that remains to be explored. We begin again by reaching the button at the end of the corridor, pressing which will lead to a sniper attack. In the same way as before, we use a moving object in the background in the form of a curtain and, if necessary, we also choose the option of rolling. 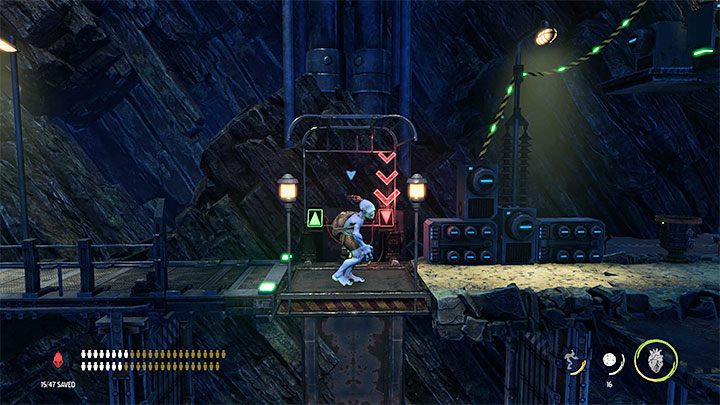 We can already press the left button, that is, the one at which all the green connections converge.

We're going outside. We can now use the left elevator, which travels to Level 2.