This page of the Oddworld Soulstorm guide contains the first part of the walkthrough of Mission 9 - Slig Barracks. Our walkthrough tells you how to safely pass through the Overlook Tower, how to avoid enemies at the Security Checkpoint and how to reach the Furnace area.

Additional note: The green color in this walkthrough stands for secrets and unique locations/activities associated with the badges (challenges) in the game. Mission 9 badges were described on a separate page of the guide.

Get to the Comms Tower 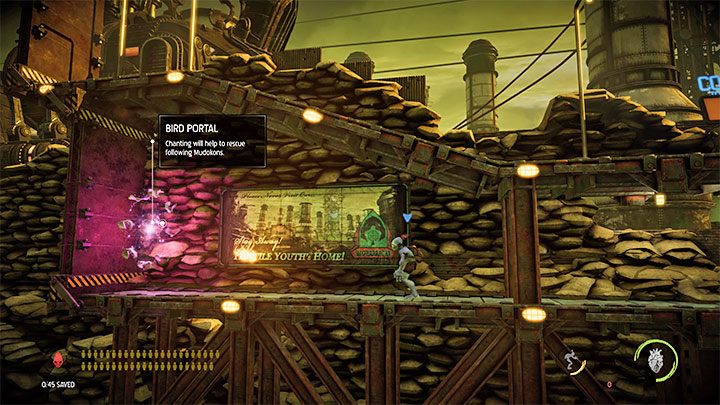 We start with going to the right. Sligs in the background can start firing. If they do so, rely on sprinting. We'll reach 1 Mudokon that we can recruit. We run back to the left where we'll find the bird portal. There's also the first Royal Jelly secret.

We can go right again. This time, we use the entrance to the Overlook Tower.

Sneak through the Overlook Tower 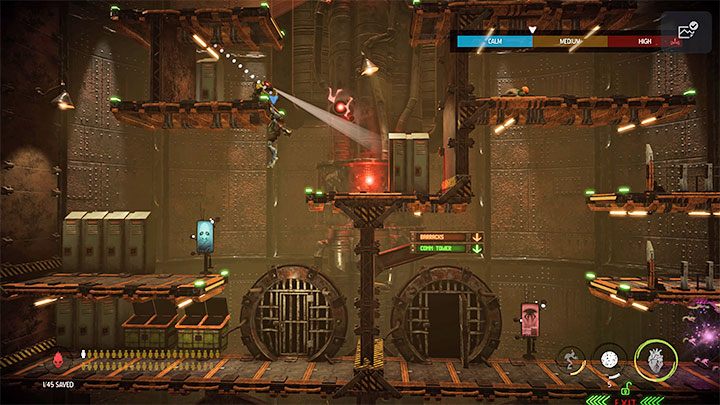 The Overlook Tower is a vertical construction. First, we need to head up, then go a little bit to the right and finally start to go down.

Before we begin to climb, remember to destroy the boxes and examine the contents of lockers and garbage cans. Sneak behind the first Slig and stun it, for example, with the help of Rock Candy, while avoiding detection by a nearby scanner. In order to further avoid the scanner, we can climb to the left wall of the tower and wait for it to head down. 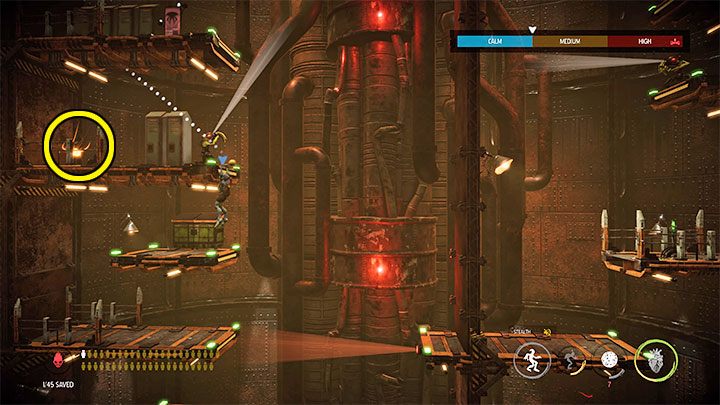 We reach the shelf with a single Slig. Once we've dealt with him, we can pick up the Royal Jelly secret levitating on te left side.

We head further up and collect as much loot as possible - it will allow us to produce smoke screen grenades, stun mines and super stun mine. During the climb, we pass another scanner at the right time and get rid of two more Sligs from the left shelves. 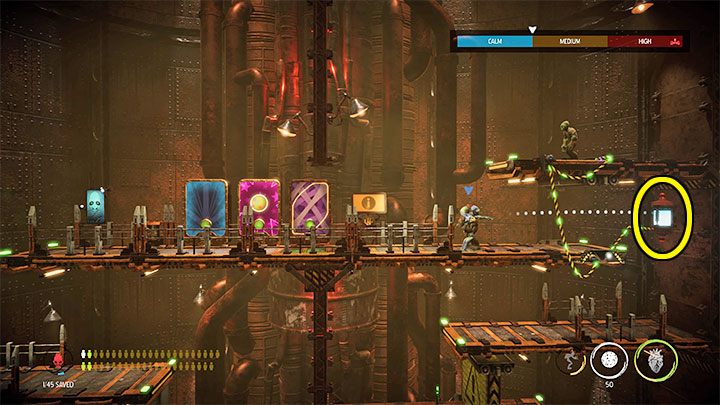 When you reach the top of the Overlook Tower, you will find a recycling machine for empty bottles and 2 vending machines - they allow you to pick up Rock Candy and Rubberbands for free. We can use this to make Bouncy Candy.

We head to the right and recruit 3 Mudokons. We order one of them to stop on the upper pressure plate and then throw a standard candy at the small container marked in the picture. This will keep the gate open permanently. We can move on with the Mudokons. 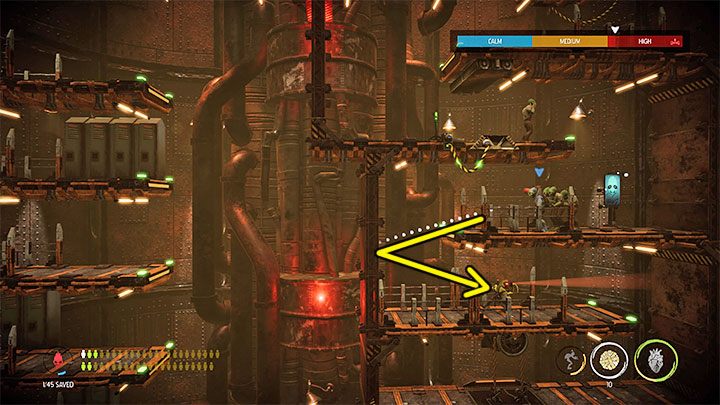 We are now heading down, passing through the right side of the tower and recruiting 1 Mudokon. We use the levers to unlock the passage.

Starting from here, Bouncy Candies can be very useful for eliminating Sligs. They can bounce off the walls and stun enemies with single hits. Let's just make sure we get the trajectory right. Stunned Sligs can be tied (but tape will be more useful later on) or quickly bypassed. 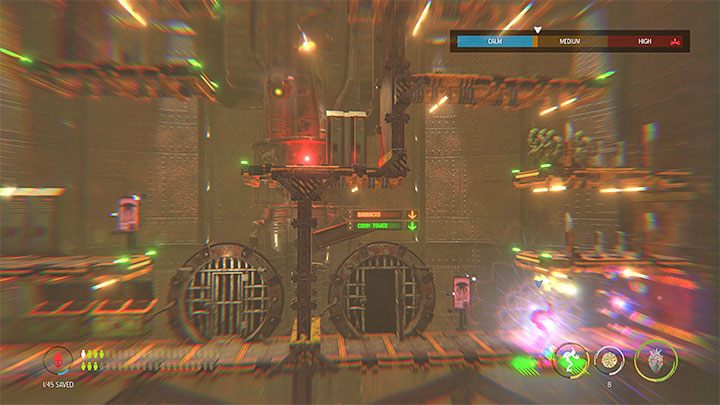 We reach the elevator and go down. Use Bouncy Candy to get rid of the Sligs and get the Mudokons through only after you've cleared the area. While using the elevator, we will come across 2 Mudokons to recruit.

At the very bottom of the tower, there's a bird portal, which we can use to save 6 Mudokons. We're leaving the tower. 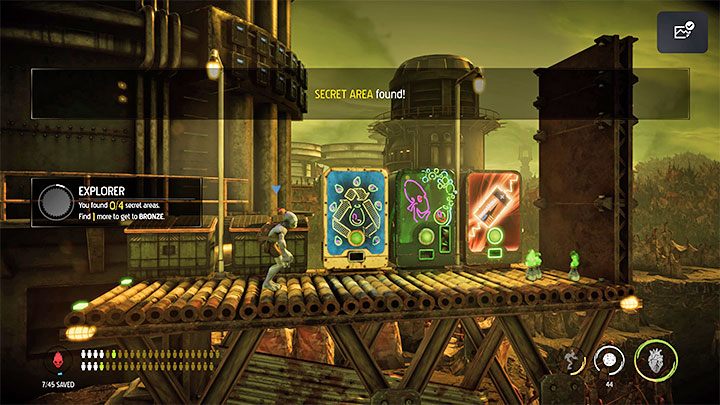 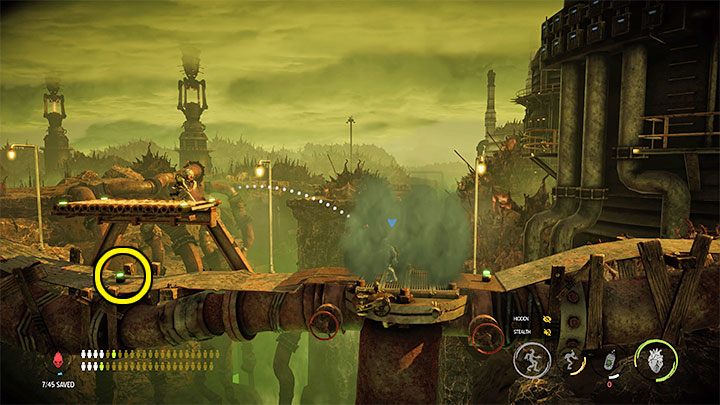 We move to the left and watch out for Sligs firing at us from a distance. Sprint and hide in the Steam Zones. Alternatively, we can order the 2 escorted Mudokons to stay back and clear the road alone first.

We will soon meet the first Slig with a headgear - these enemies are resistant to possession and it doesn't matter whether there are any Chant Suppresors in the area or not. To stun the enemy, we can use any gadgets, even standard candy. Watch out for the mines on the lower path. It is worth disarming all of them so that the escorted Mudokons do not detonate any of them by accident. 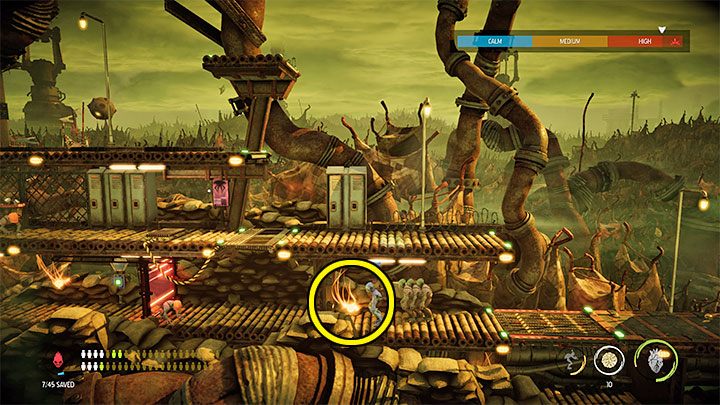 We head further to the left and stop after reaching the checkpoint. There are two Sligs. The one from the top shelf is more problematic, so it's better to not only stun it, but also tie it up.

On the lower level, there is 1 Mudokon to recruit. Before letting him join you, use smoke screen grenades to blind the scanner. The interesting thing is that pulling the lever activates the steam zone and facilitates possible hiding from the second Slig. At the left end of the bottom path, there's a Royal Jelly secret, as marked in the picture. 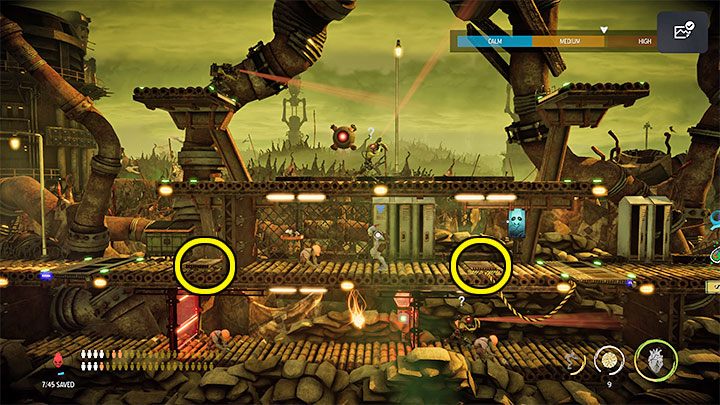 The next area was divided into two parts - the upper and the lower ones. We can get to the lower part by positioning ourselves on the pressure plates marked on the image - we can recruit a Mudokon and order him to do the same. The lower path is patrolled by a Slig, which we can avoid or get rid of. Moving red barriers react to movement - if you don't want to raise the alarm, stop for a moment and let them move past Abe. Mudokons have to do the same. We can recruit another Mudokon here and pick up a Royal Jelly secret.

In the upper part, we can encounter 2 Sligs and due to the presence of Chant Suppressors, it is not possible to use possession. We can fortunately get rid of them, e.g. by throwing candy at them (preferably from a hanging position or a very long distance). Depending on tape supplies, we can additionally tie them up or quickly leave this place with all Mudokons and go further to the left. 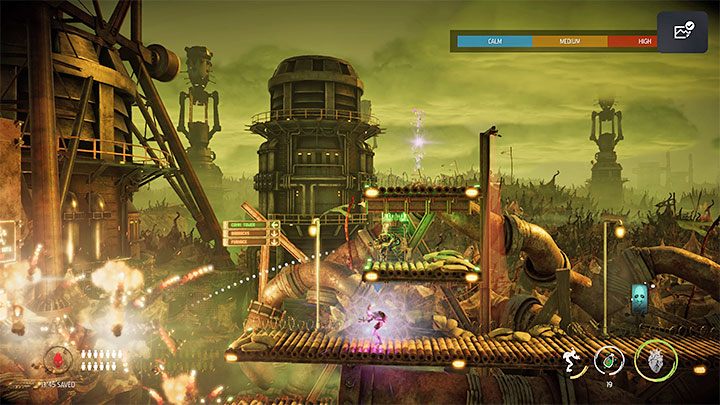 In the next area, we need to be aware that even if we blind the scanner with a smoke screen grenade, another enemy will still come out of the guard on the central shelf. It is best to quickly stun him with candy and just as quickly activate the upper portal so that all the escorted Mudokons manage to escape through it.

We stay here and use possession on the Slig. It will serve us to solve a small environmental puzzle - we can shoot at explosive boxes on the left, which will make them blow up, opening a passage for us. 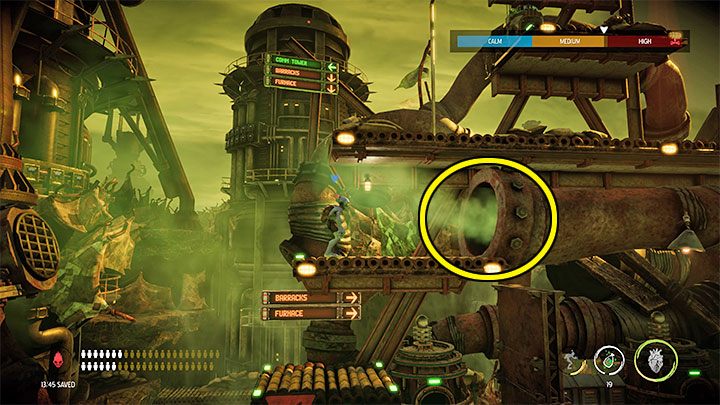 After jumping down, we first look into the pipe with some green vapors coming out of it (see the attached picture). The inside of the pipe is a secret area.

We can use the lower passage, which leads to the barracks and, at the same time, towards the furnace.