This guide for No Man's Sky is aimed at both beginners and those who have decided to go back to this game after numerous updates. The guide contains a lot of helpful tips. To make the first few hours with the game easier for you, we have prepared a detailed description on how to start the game, how to leave the first planet and the first solar system.

No Man's Sky focuses on exploration, discovering new lands and crafting items. One of the pages is dedicated to exploration of new planets, system and discovery of new species. There, you can find tips on how to name new discoveries. The guide also features descriptions of the galaxy, solar systems and planets.

The guide for No Man's Sky also features information on how to upgrade items - your ship and space suit, which are used as a main pieces of equipment during your space travels.

Other things that you can learn from this guide are the game's system requirements, controls and settings. Due to its size, No Man's Sky has rather high requirements. Our guide has tips on how to make the game run smooth and look good at the same time. You can also check out the page dedicated to the controls.

We have created an in-depth list of all achievements along with their descriptions.

No Man's Sky in a nutshell

No Man's Sky, released in 2016 on PC, PS4 and XONE, is a space sandbox. The game lets you explore the galaxy inside of your spaceship and on foot. The game is set in the future. The procedurally generated galaxy, which consists of more than eighteen trillions of planets, should provide you with hours of content - it is very hard to explore all planets.

Solar systems are also procedurally generated. The same goes for the planets, their flora and fauna. The goal of this mechanic is to make every playthrough of No Man's Sky feel unique. The game's world also features numerous aliens and monsters. Some of them are hostile towards you while others will try to escape. We have described some of them so you will know what to expect.

The game gives you an opportunity to explore a gigantic universe that consists of trillions of planets. The player can visit planets with varying atmosphere, scan new life forms, fight with mysterious Sentinels, discover secrets of an ancient civilization, trade with other species and reach the center of the universe. The size of the game can provide players with almost an infinite amount of hours - the only limitation is your determination in exploring the world.

The game was developed by Hello Games known from Joe Danger series.

No Man's Sky Next

No Man's Sky Next is another large update for the original game which didn't meet the expectations upon its release. We have updated our guide by adding the new content added with No Man's Sky Next patch. We focused on ways of building and developing bases, using the portable refiner, getting Pure Ferrite, Sodium Nitrate or Chromatic Metal. Our guide also features numerous tips that can help those who want to go back to the game after this update.

To start No Man's Sky you have run the game and wait for the introductions to end. After that the screen goes white and you will see "Initialize...". Press and hold the button displayed on the screen (Square for PS4, E key for PC). The rest of the aspects of the game have been described on a separate page.

During your time with No Man's Sky you will explore, complete various missions and craft new items. To make the beginning portion of the game easier for you, we have created a list of useful starting tips. They focus mostly on exploration and crafting.

On 24th July 2018, No Man's Sky has received a fourth large update. One of the new features introduced with that update was the long-awaited multiplayer mode. You can now cooperate with three other players. This mode is great for all players, regardless of whether they want to build bases with friends or participate in space battles.

You can upgrade your space suit, tools and the ship. We have created pages dedicated to each of these items. Read them if you want to, e.g. learn about that are required for a particular upgrade.

The last chapter of this guide contains technical information about the game. There, you can find system requirements and descriptions of the graphics settings that can require more power from your PC. Besides that, you can also learn about the controls on every platform. Additionally, we've prepared a detailed list of achievements/trophies, so you can unlock them in 100% relatively fast.

Is your PC powerful enough to play No Man's Sky?

Below we presented the minimal hardware configuration for No Man's Sky on PC. A minimum specification is required to run the game in 1080p with the lowest detail settings. There is no single precise requirement for the recommended hardware configuration. However, the game gained a few updates to improve its graphics, although it didn't become more demanding in terms of hardware.

About No Man's Sky Game Guide

No Man's Sky NEXT 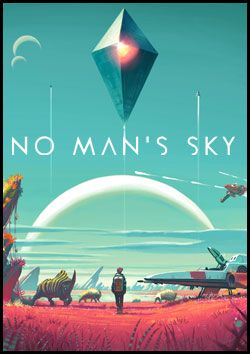 No Man’s Sky is a sandbox action game with first person perspective set in science-fiction world. The game offers us total freedom and puts no limits in matter of choosing our virtual career. The heart of the game is system of procedural generation which is responsible for creating not only animals and plants on single planets but also for entire star systems and galaxies.

No Man’s Sky focuses on the exploration. We are travelling across the universe in our spaceship, controlled like in space simulators with view from the cockpit, while exploration and combat on the planets’ surfaces look like in first person shooters. The action takes place not only on land and in space but also under water and in the air.

Each planet has its own fauna, flora and even composition of atmosphere. The closer we get to the core of the universe, the more dangerous planets become (they are more often inhabited by deadly predators and have toxic atmosphere). Generated worlds are saved on the server so they can be explored later by other players.

More About No Man's Sky

Silence is golden, but No Mans Sky starts the chatter again

Sean Murray has recently broken the radio silence and started giving interviews again. This is not great news, because with such move comes the risk of Hello Games ruining the good impression theyve been able to create during the last two years.

The gaming industry has definitely witnessed worse years than this, but it couldve been A LOT better, too. 2016 is coming to end, and its the right moment to sit and moan about all the things that went wrong in the gaming biz in the last 12 months. This site is not associated with and/or endorsed by the Hello Games or Hello Games. All logos and images are copyrighted by their respective owners.