The unofficial guide to NiOh is the collection of the most important tips and tricks regarding the game. The most important element of the guide is the walkthrough of all main and side missions available in the game. Our walkthrough description focuses on fighting enemies, lists key quest items as well as the location of collectibles and secrets that include new paths and Kodama ghosts. The guide is filled with screenshots that will help you navigate through its contents, while different fonts relate to the most important elements of the in-game world.

Apart from the walkthrough, the guide includes sections focusing on multiple aspects of character development as well as gameplay mechanics, especially combat and using gathered pieces of equipment. There is also another section focusing on bosses you encounter at the end of each major quest. There, you will learn about their weak spots and find hints that will make each battle easier. This guide includes also a thorough controls and interface description. Finally, you will also find a trophy guide comprising information on all trophies from the base game.

NiOh is an action game taking the players to Feudal Japan. Aside from samurais of Sengoku era, we'll be facing Yokai - demons from a dark universe that managed to access our world through interdimensional portals. The game developed by Team Ninja enables us to assume the role of William, an English pirate pulled into a showdown between the most powerful superpowers of the world. A small scuffle with a certain alchemist brings him to Japan.

I have a problem with defeating a boss

A separate section in this guide to NiOh focuses on fighting bosses. It will allow you to locate a particular boss fight when you get stuck. The bosses we have described are:

Is NiOh a long game?

Yes, NiOh is quite a long game even if you focus on story quests only. To complete the game, you need at least 30-35 hours, however, you have to skip a lot of additional content (side quests, collectibles, etc.). In order to unlock the platinum trophy, you might need to spend up to 100 hours playing the game.

More information about the length of the game can be found in a separate section titled: How long does it take to complete NiOh?.

Is it possible to reset skill points?

Yes, you can do this using the Book of Reincarnation. You can acquire this item from the blacksmith and use it to reassign the character's skill points. The game allows you to do that unlimited number of times, however, the book gets more expensive with each usage.

More on resetting your progress can be found in How to develop the character? section.

How to use Amrita?

Amrita is a unique resource type that allows you to increase the character's main stats. You can acquire it by eliminating enemies, however, it can also be a reward for completing a mission.

For more on Amrita go to a separate section of this guide titled - Amrita and experience levels.

What is the purpose of Shrines? 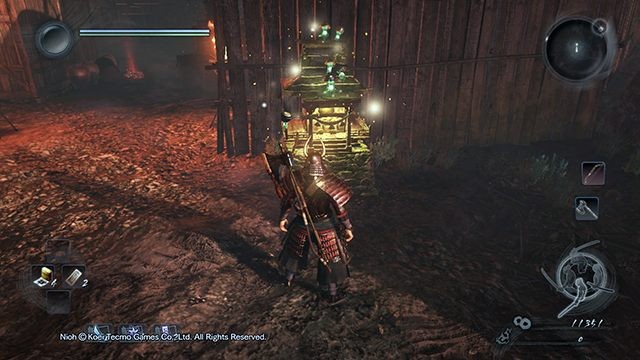 In NiOh, shrines have multiple purposes. They allow you to rest, however by doing so, you allow the opponents to respawn. Moreover, you can level up your character, make offerings, receive Kodama blessing, and change guardian spirit.

More on Shrines can be found in the Altars section of this guide.

Is there crafting in NiOh? 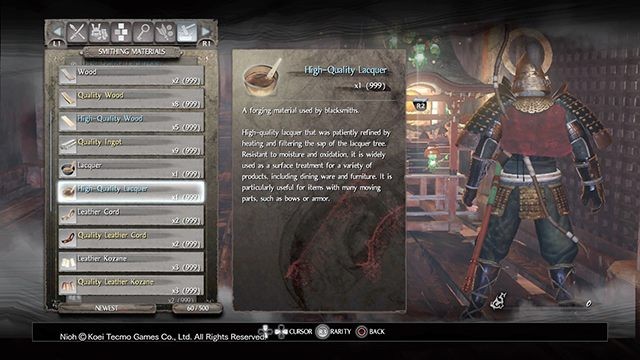 Yes, NiOh offers crafting, allowing you to upgrade your weapons and pieces of armor, as well as creating completely new items. For each crafting operation, you need to have proper crafting materials. The higher the quality of an item you want to upgrade or craft, the rarer the resources necessary for crafting it.

More on crafting can be found in the Accessories and resources section.

What are Kodama ghosts? 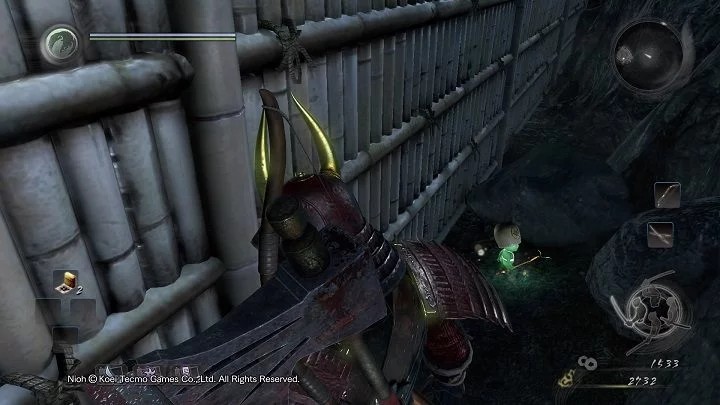 Kodama Ghosts are green beings you will encounter on your journey - there are 150 in total. After interacting with the ghost, it goes to Chram, where you can use its aid and blessing.

More information on finding Kodama ghosts and the help they offer can be found in the Kodama Blessings section.

What are the results of dying in NiOh?

After dying, the protagonist is transported to the shrine he last visited. You can attempt returning to where your character died - there, you'll find his grave. Interacting with it allows you to retrieve Amrita and replenish the Living Weapon bar.

This topic is well described within the Dying section od this guide.

Are there secret passages hidden in NiOh? 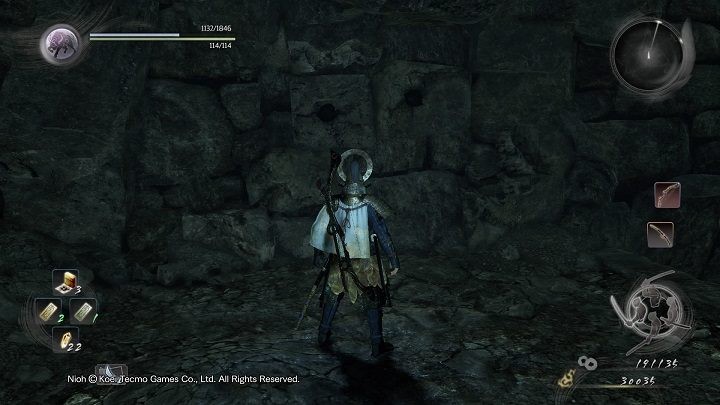 Yes, there are a lot of secret passages in NiOh. Some of them require you to explore the neighborhood more thoroughly. There is a unique category of secret passages called Nurikabe, which are much more difficult to locate and which have to be gotten rid of - more on that in a separate section of this guide.

Is NiOh more difficult than the Souls games?

In many ways - yes. NiOh is a game revolving more around action and quick reactions to opponents' attacks. Combat mechanics are quite complex - weapons are handled differently, you can use different stamina renewal techniques, and choose between stances. Also, some bosses are very challenging - and there are a lot of bosses in the game. Each main quest finished with a boss fight.

Do I need to complete NiOh 1 before playing NiOh 2?

It is not obligatory, yet it is recommended. This will allow you to familiarize yourself with the combat basics, although NiOh 2 features a number of new mechanics, e.g. turning into a demon. It is also worth mentioning that the action of NiOh 2 is set before the events from the first installment.

Is it difficult to unlock the Platinum trophy in NiOh?

Yes, it is quite difficult. Mostly due to the fact that the game itself features high difficulty level and completing it is not an easy task. NiOh is a long game and, in order to unlock the platinum trophy, you have to spend a lot of time on the tiresome grind. The platinum trophy can be unlocked without completing the game multiple times, nonetheless, mind that it might take up to 90-100 hours.

More on that in the NiOh trophy guide.

The most important controls in NiOh

Below, you can find the most important controls in the game. Full PS4 controls description can be found in a separate section titled Interface and controls.

PlayStation 4 has received hundreds of games over the last seven years. Our editors have selected sixteen greatest PS4 video games, including exclusives, that you should play - no matter who you are.

Is 2017 the worst year of the video game industry? Absolutely not!

“The industry has gone to the dogs”. “This is the worst year in video games ever”. ”Gotta find a new hobby”. We’ve seen tons of similar comments lately. Meanwhile, it doesn’t take much to find out that 2017 was in fact a great year for gamers.

The most anticipated games of 2017 – Gamepressure picks

This site is not associated with and/or endorsed by the Tecmo or Team Ninja. All logos and images are copyrighted by their respective owners.