The Golden Castle is the second main mission of the sixth region in Nioh 2. This page of the guide contains a walkthrough for this mission.

From the first shrine, turn left, you will notice two soldiers there. In the room on the left you will encounter two more opponents. Behind the wall, which you can destroy by going into it (it is located opposite), you will find a chest. 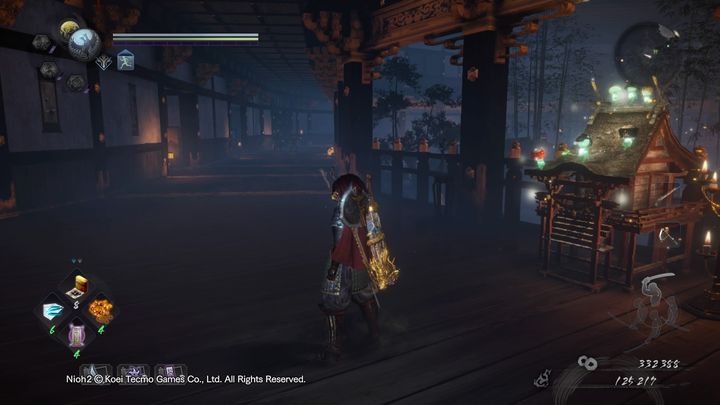 Then, proceed straight ahead. Kill all soldiers you may come across. To the right of the chest there is a door that you can open. 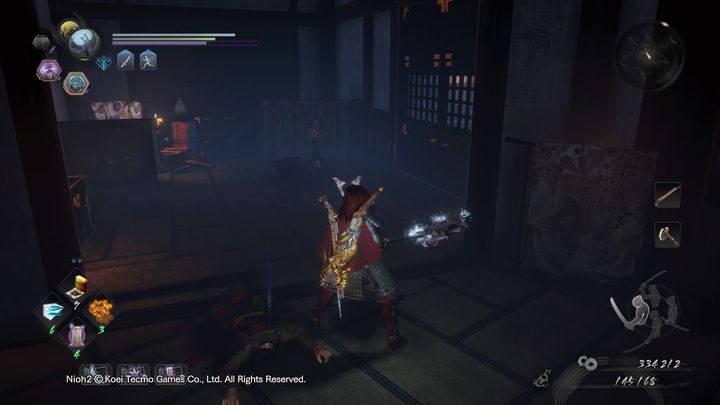 Going further, just behind the stairs (where the shrine at the upper level is located), you will see the Yokai fog. A Yoki will spawn out of it. Kill him, then go ahead. On the left there is another room, enter it and defeat the soldiers. Collect all items, after defeating your enemies. Then go further ahead, walk around the location. This will take you back to the shrine from the beginning, but you will open a shortcut that is next to the shrine. 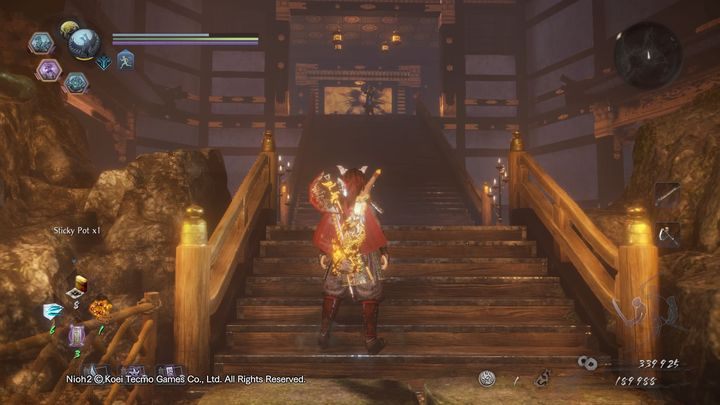 Step back to the stairs leading up to the top - you'll find them in the middle of the location. They mainly lead to the great Enenra painting, which you will have to confront once again. 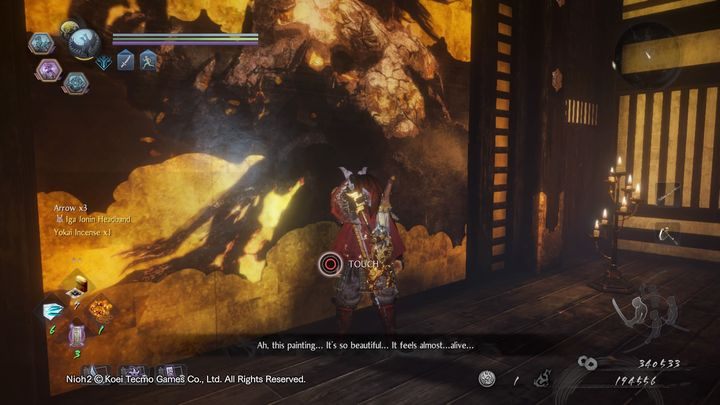 Touch the image to enter the arena with the boss. Another fight against Enenra awaits you, he is much weaker and there is nothing different from the first boss fight. If you still have problems, read how to deal with Enenra in the Bosses section of our guide. 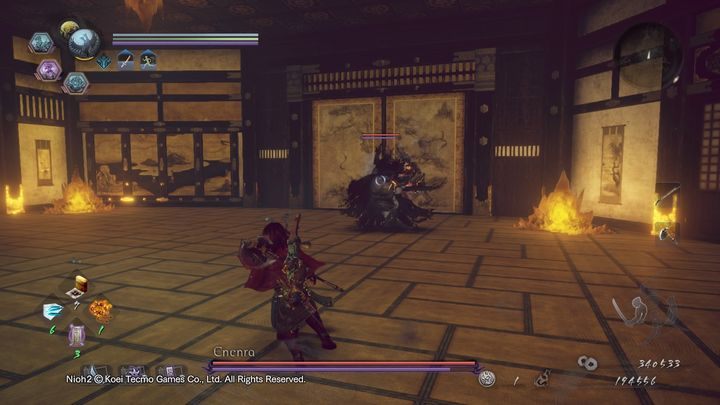 After defeating Enenra, head to the next room and take the stairs up. There you will find a ladder, descend down and open the door. You will unlock a shortcut. 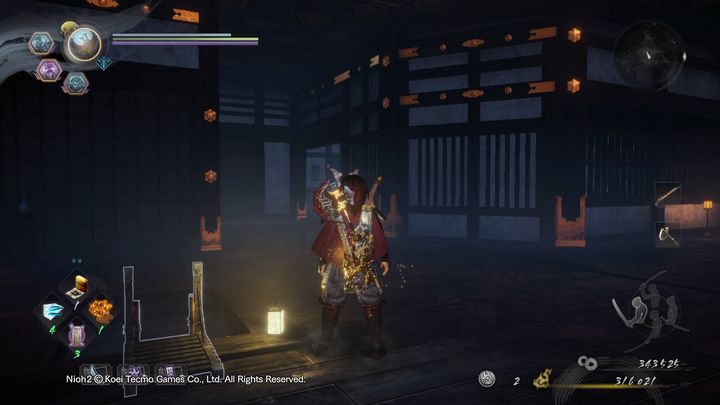 Climb the ladder and walk ahead to the next room. There you'll encounter more human enemies, defeat them one by one. 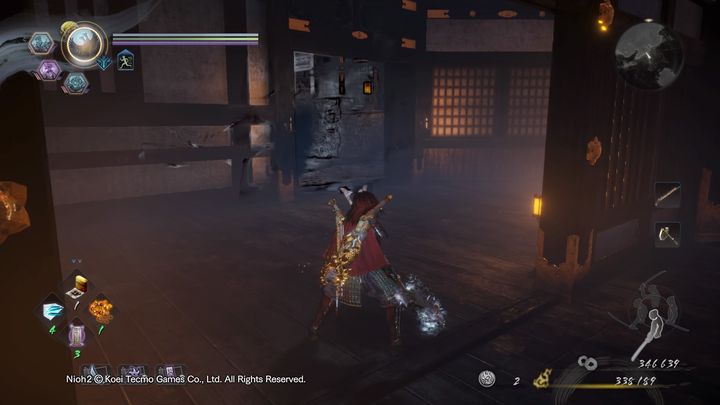 On your way, you'll find a passageway that is shrouded in Yokai fog. But don't go there yet. Instead, turn left, climb the stairs. There's another opponent waiting for you. At the very top there is a little Yokai fog, from which Ubume will spawn. After defeating the enemy, open the chest, jump down and walk toward the Yokai mist. 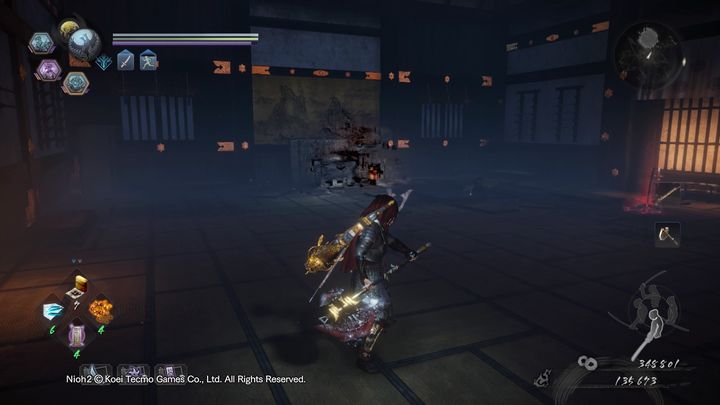 This area is patrolled by Rokurokubi. Also, there are two Gaki on the right and one Yokai soldier just above the top of the roof (behind the Gaki duo). After moving to the roof in the direction where the soldier was staying, on the right you can see the great Amrity crystal, together with a Yoki and another soldier. It's worth killing the Gaki duo first, and then taking care of Rokurokubi and Yokai soldier. Then it's better to destroy the large Amrite crystal first. After that defeat Yoki and another soldier. 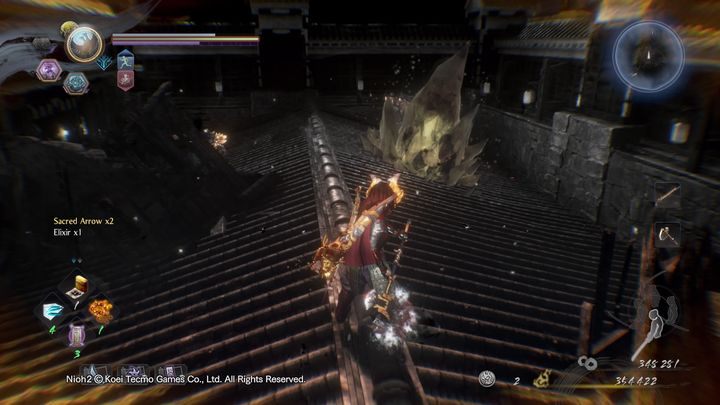 After defeating all opponents, open the locked door and go downstairs, there you will find a second shrine.

At the second shrine on the right there is a door that is locked. You will unlock it a bit later. It will serve as a shortcut. Turn left at the stairs and walk ahead. You'll encounter Yoki there, try to attack him and fight him alone. 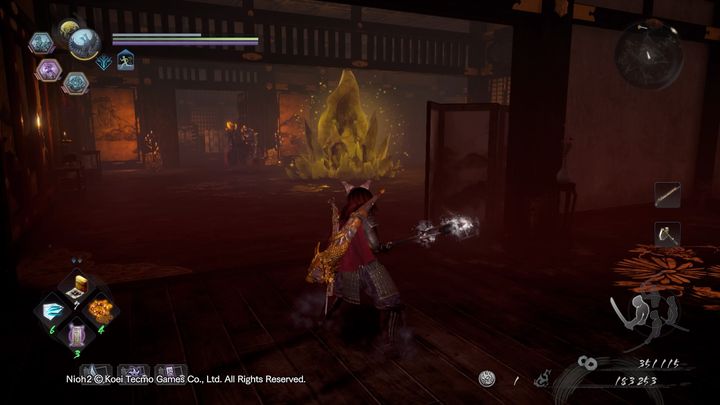 After defeating Yoki, turn right, there is a room with another Amrita crystal and some enemies - Yoki with Kusarigama and a Yokai soldier. It is best to destroy the crystal first, instead of fighting your opponents. However, be careful, because when you attack the crystal, you are most likely going to be attacked by nearby opponents. Also be careful not to fall down when the crystal is destroyed, as there is a breach underneath it. Only jump down there when you have the right amount of health, as there are more opponents there and jumping down without healing can result in a quick death. 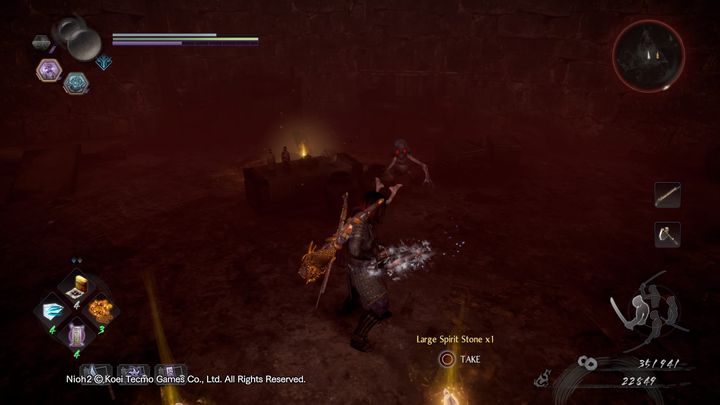 At the bottom there are, among others, Gaki and Yoki and some items to pick up. Defeat them, pick up whatever lies on the ground and move on. 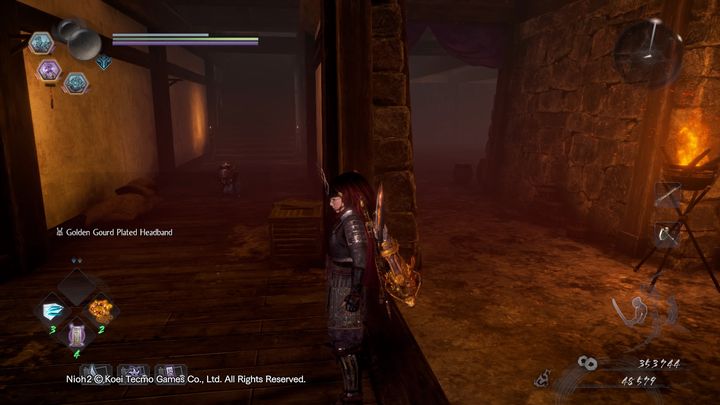 By going further, you should encounter an armed dog on the stairs, he's alone which makes him easy to kill. Go up the stairs, turn left and you'll find Scammpus. There is a door that can be opened on the right. When you open them, go straight ahead, outside. On the right side there is a door at the shrine. Open it to unlock the aforementioned shortcut. 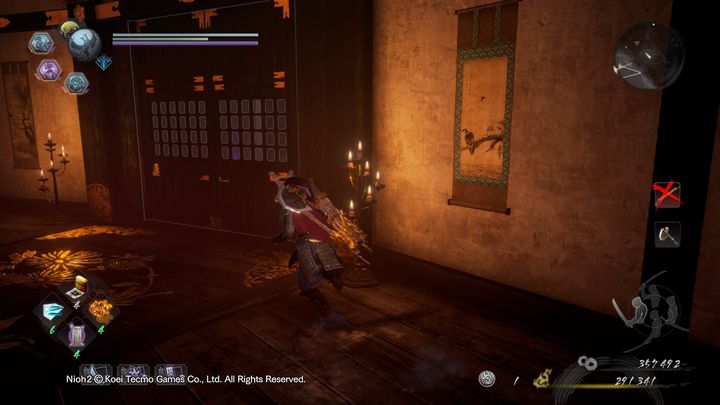 Then, go towards the Yokai fog and another large shard of Amrita crystal - destroy it as soon as you can. This crystal curses the local area with Yokai fog. 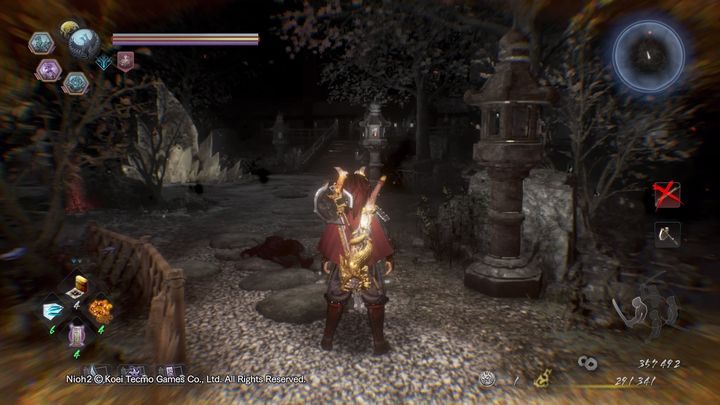 Watch out for the hole again after you destroy Amrita crystal. Destroying this crystal won't kill other Yokai. In the best case, they'll lose their Ki bar. Watch out for the lamp by the crystal too, this is Yokai Koroka. Shoot the lantern from a distance and destroy your enemy. Instead of going to the top, go up the first staircase and turn right. Defeat your opponent and go on that way. You'll find Nurikabe there. Unlock the road with a gesture and move on. You'll find a hot spring and a door to open. 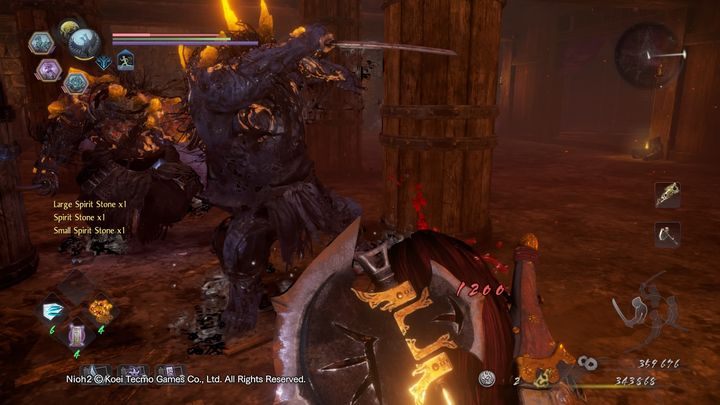 However, watch out for the enemies behind the door, as there is a duo Yoki and a Yokai soldier. It is recommended to fight them one by one or use area of effect attacks if you are attacked by more opponents. Keep going to the room where you'll find a ladder. Climb it. There is a door to open on the right side. Unlock the shortcut to the Yatsunokami painting. On the side from which you opened the door, you will find a painting with Mezuki and Gozuki. 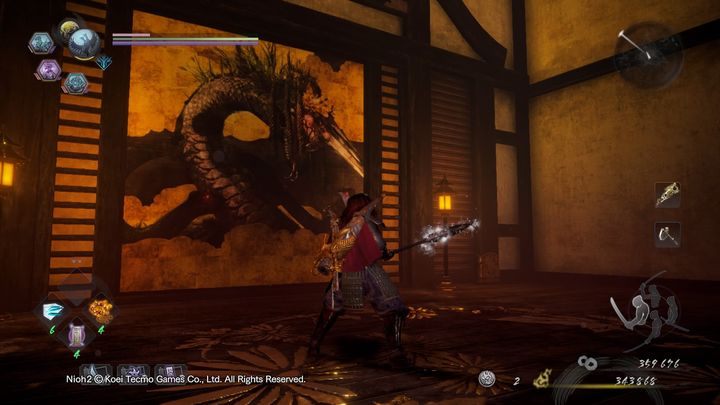 By touching each image, you will start a boss fight. They are no different, they are weaker and you know their movements. The exception is the battle with Mezuki and Gozuki duo. Although they deal less damage, there are two of them, so you have little time to inflict damage to them. It is best to wait until they both attack and then deal area of effect damage. Use the twisting slash axe skill from the axe skill tree which inflicts area of effect damage as long as you have enough stamina. First, go towards the painting of Mezuki and Gozuki. After defeating them, go upstairs, destroy the Amrita crystal, open the door, and unlock the next shrine. Once you have activated it, go back to the Yatsunokami painting. After you defeat him, go upstairs again, open the door, you'll be in the same place with the shrine as before. 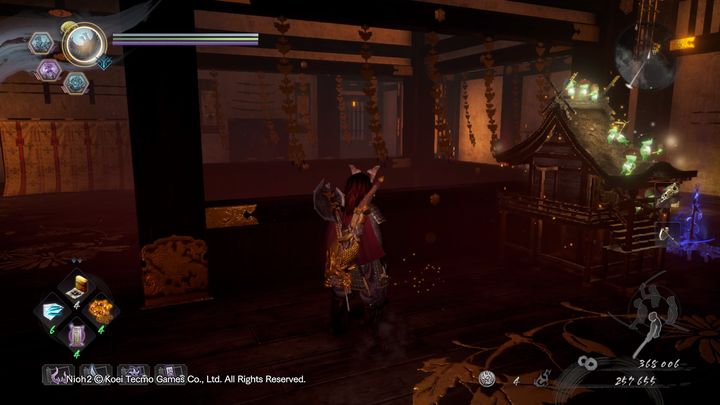 The third shrine is the climax of the location. By moving on ahead, you'll come across a Yoki in a room and a Yokai soldier on the stairs. 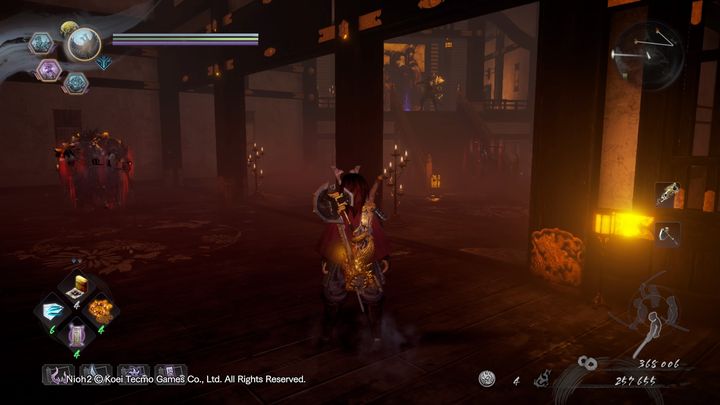 At the top there is the last image which portrays Kasha. Defeat her as you did in the previous fight and you won't have any problems. 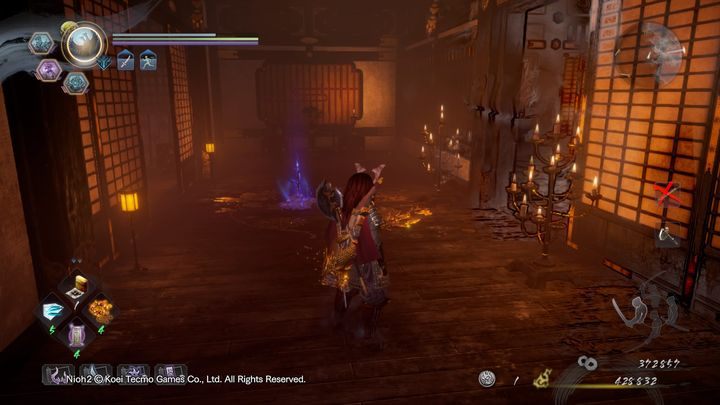 After defeating Kasha, go up the stairs. On the left (check the screenshot) there is a room with a ladder. Before you descend it, activate the Scammpus, which is around the corner on the left. Climb down the ladder and drop the second ladder, which serves as a shortcut to the final boss of this location. Go back upstairs and turn right into the room full of Yokai fog. 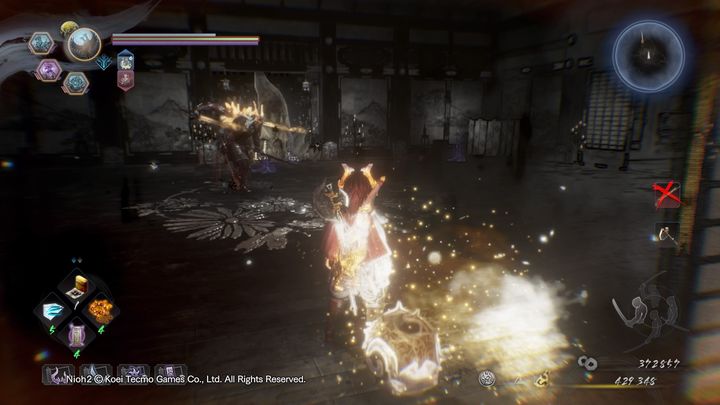 There is a Yokai soldier and Magatsu warrior in the room. Fighting him can be really hard, so it's best to provoke him to attack you. At this particular moment, try to get out of the room as far away from the crystal as possible. Once you've done that, run to Amrita crystal and destroy it as quickly as you can. You will get rid of your enemy without any battle and also get rid of the Yokai land. Behind the door that was blocked by the crystal, there is the final boss, Lady Osakabe. You can find a detailed description of this boss fight in a separate chapter of our guide.