The High Spirited Demon is the third main mission of the fifth region in Nioh 2. This page of the guide contains a walkthrough for this mission.

At the very beginning of the mission, turn around towards the collapsed building, there is a Kodama at the door. Continue on until you will come across a NPC called Mumyo. She can help you defeat enemies after you talk to her. Head on and pray at the shrine. 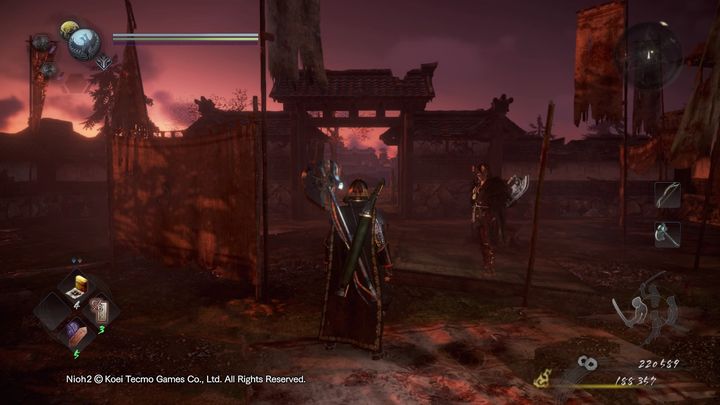 From there go down the path. You will come across several Yokai on your way, including the warrior skeleton and Yoki. After defeating them go straight ahead instead of going down. There is a hidden path near the tree and a bush. This way, you will get to the large crystal required to earn a trophy. 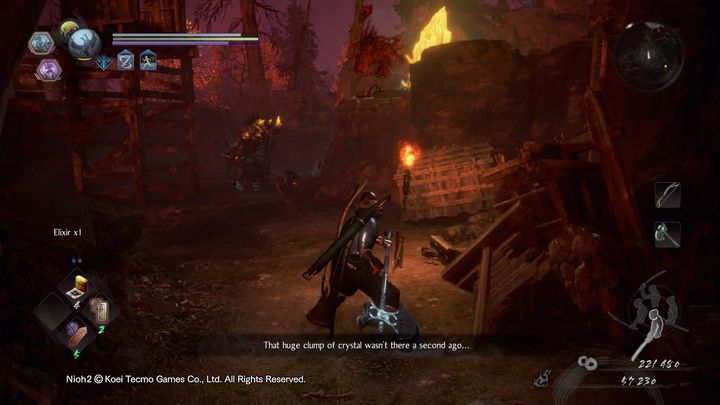 After destroying the crystal, go down. There you will mainly fight an army of Yoki, including standard Yoki and Yoki equipped with a shotgun. But instead of heading forward (Watchtower), turn left and go up. 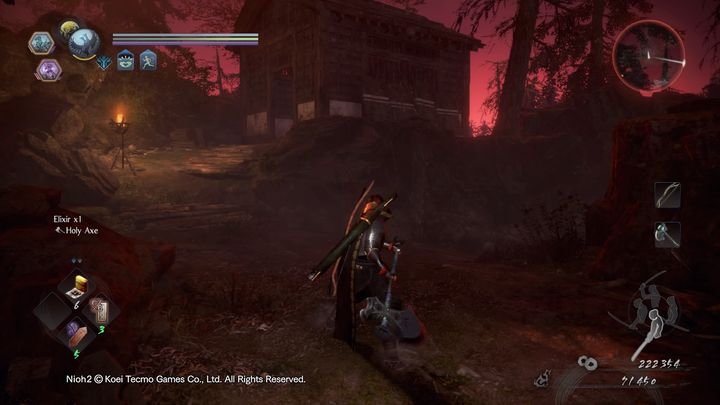 Enter the building shown in the screenshot. You'll encounter the Kamaitachi as a miniboss. The fight against him is very much the same as before. Kamaitachi is much easier to defeat, and you have Mumyo as a companion. 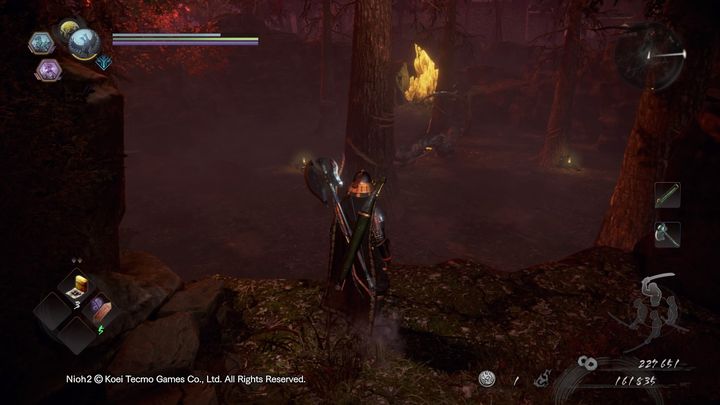 Use the same tactics as when you fought Kamaitachi in the Boss form. After defeating him, destroy the yellow crystal that will unlock the path. Be careful, because the crystals radiate a red aura from time to time, that can trigger a small explosion around them. Stop attacking after you notice a red flash. 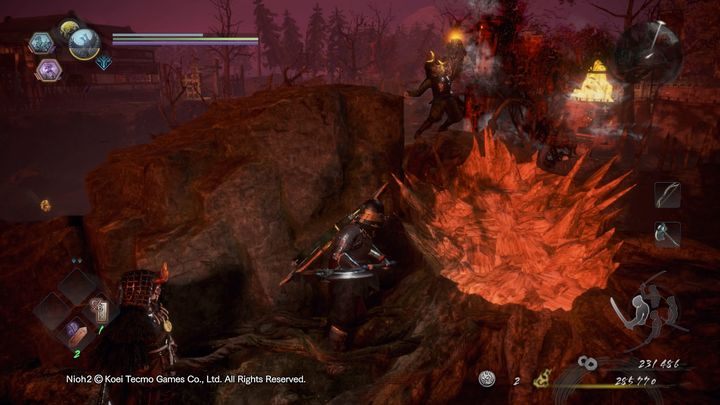 On the left, behind the destroyed crystal, you can find Sudama, while on the right, there is a Yokai soldier. Defeat him and walk over a fallen tree. However, beware of the red markings of fallen players / NPC, as there is a Biwa Boku-boku nearby, which will summon one of them to fight. Walk a bit further. There you will find another crystal, and the aforementioned Biwa Boku-boku. Destroy the crystal as quickly as possible to free the area from Yokai, and deal heavy Ki damage to other enemies. 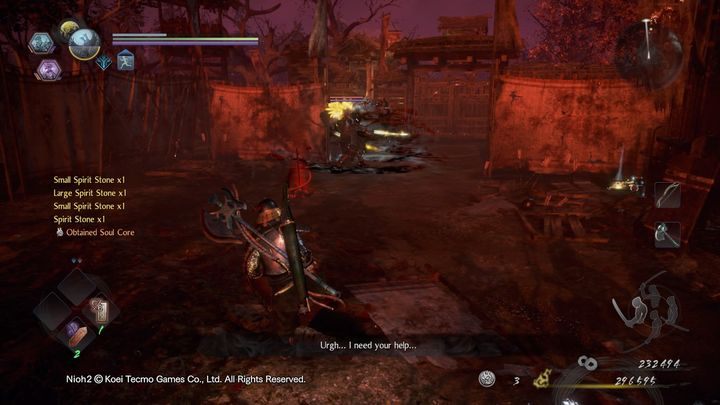 After wiping out smaller enemies, the gateway is protected by Magatsu - a Yokai who fights with two swords. Attack him in the back (walk around him), because it's his vulnerable spot. It's best to attack him after he performs a strike. After defeating him, open the gate. On the left there is Kodama behind some shields. On the right there is a door that you can open. There is also a door on the left that will lead you into the arena where you have to take part in a boss fight. Don't open them now, move back a bit and turn left. 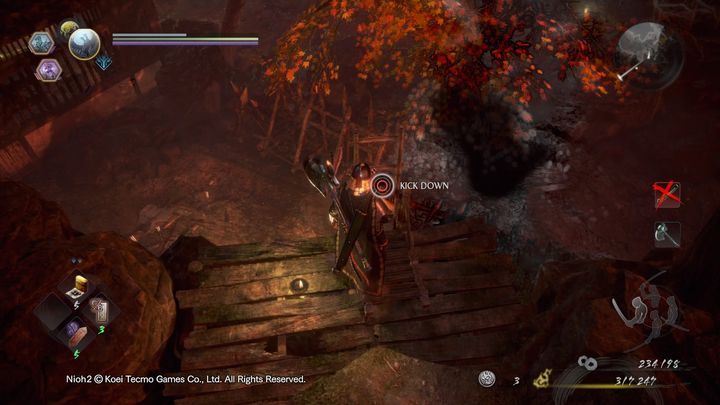 There's a ladder - you can lower it down. Down below you can see next Shrine. However, you have to defeat another Magatsu to get rid of Yokai land. The enemy is wandering in the building next door. 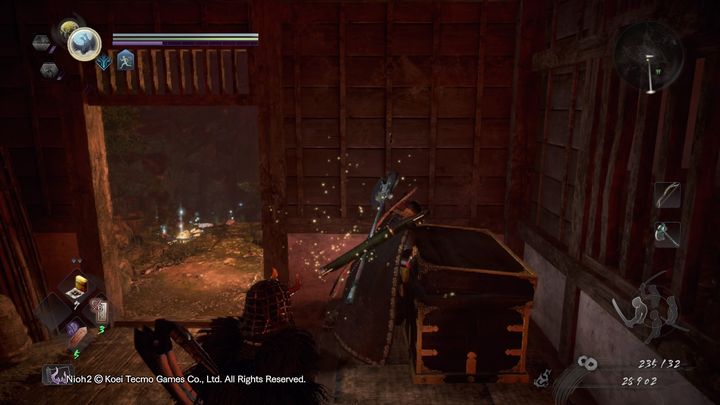 You'll also find a chest, open it. After defeating your opponents, pray at the Shrine.

Climb up the ladder and walk across the fallen log to the other side. There, you'll encounter another Yoki and minor skeletons. You'll see another Kodama to collect on the roof of the building. 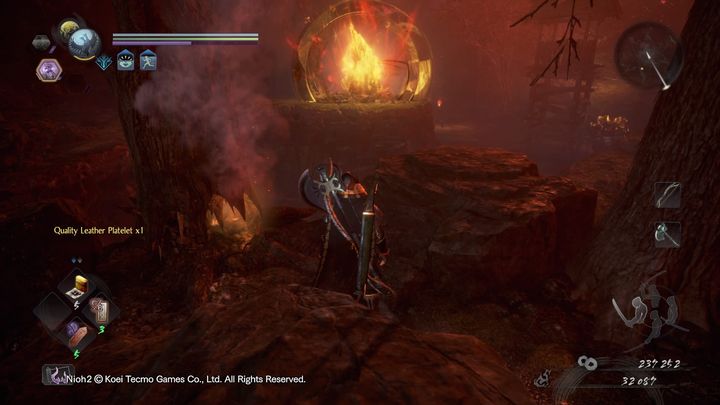 Overthrow the tree that glows with fire from the inside. This will allow you to get to the other side and destroy the crystal. After all, go back to the place where you defeated the first Magatsu. 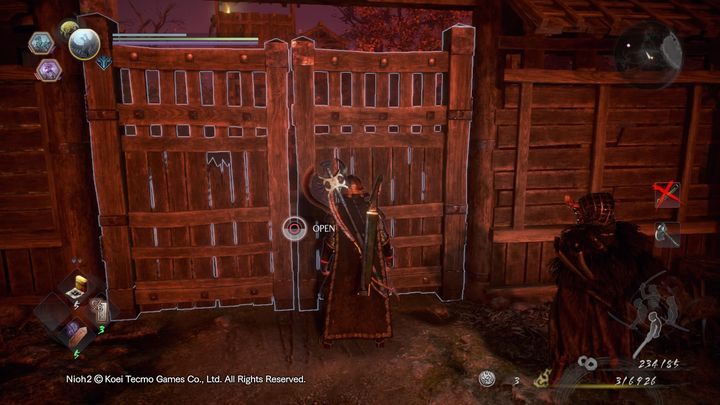 Open the door on the left. You'll have a fight against one of the two bosses of this location, Hachisuka Koroku. The description of the boss fight can be found in a separate chapter of this guide. After defeating boss, go to the other side of the bridge and pray at the Shrine.

Go down. You will meet Mumyo who is resting there. Talk to her twice and get an item. 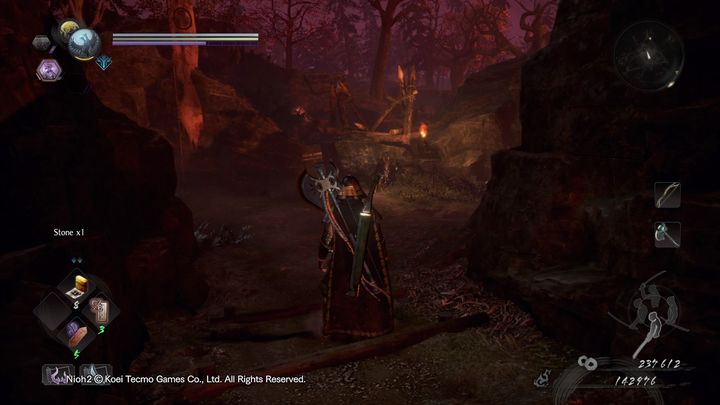 Continue on. You'll come across a great enemy on your way. This foe will shoot at you with yellow projectiles. This opponent is Daidara Bocchi, who is the final boss of this location. You will confront him later. Until that moment you have to dodge his projectiles. 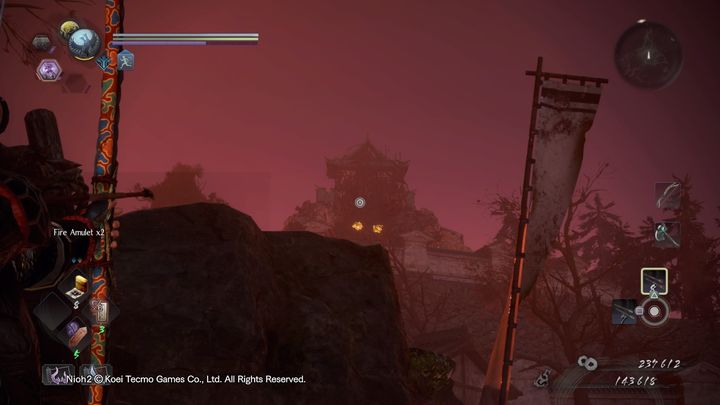 Keep to your right while you watch out for Daidara's missiles. You'll encounter another Magatsu warrior there. By defeating him, you'll get Rusty Key. Use it to open the door he was guarding. Go ahead and jump into the building through the gap. Destroy another crystal that is inside and rest in the hot spring. Open the door and keep moving forward. 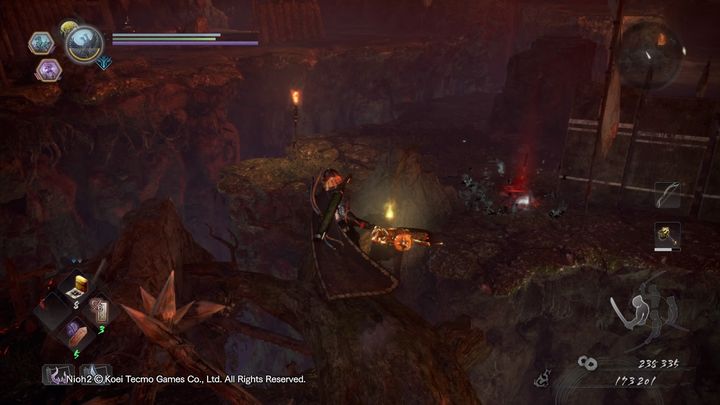 It's not worth fighting the opponents. The only one worth killing is Biwa Boku-boku, which is hiding behind the stone. Walk over the log and run up to the stone where the enemy is sitting. Be careful, though, because he will summon other NPCs as reinforcements. 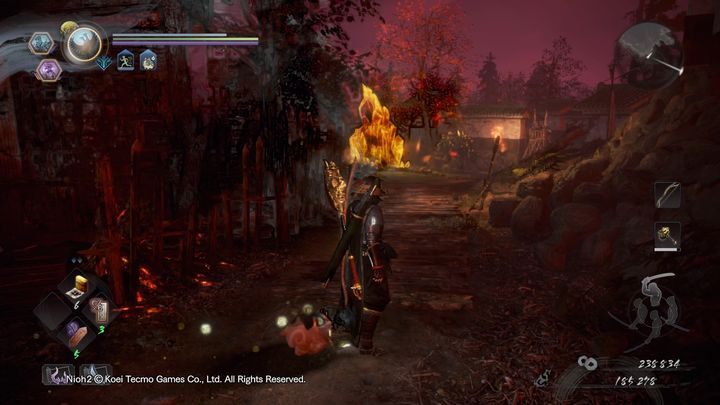 By going ahead, you'll come across another crystal. This time it is guarded by a warrior skeleton on the watchtower and a Yoki. But before you start fighting them, go left by the crystal. There is a door that serves as a shortcut to the third Shrine. 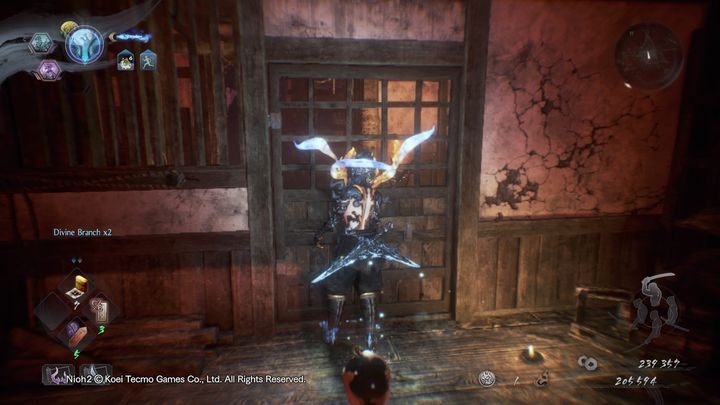 You can rest at the Shrine and regenerate your strength. Now move back to the crystal. There's a chest near the door, which is a Mimik. Climb the watchtower first, defeat a skeleton that would make it difficult for you to eliminate Yoki. Then attack the crystal. This will get rid of Yokai's land and inflict high damage (of Ki) to Yoki. 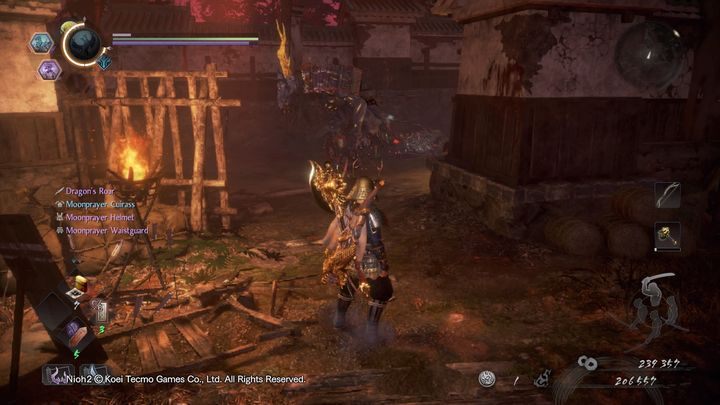 Keep going. You will encounter Mezuki - beware of his slow but far-reaching attacks. If you have a problem with Mezuki, then there's Scammpus near the previously open door that may help you with the battle. 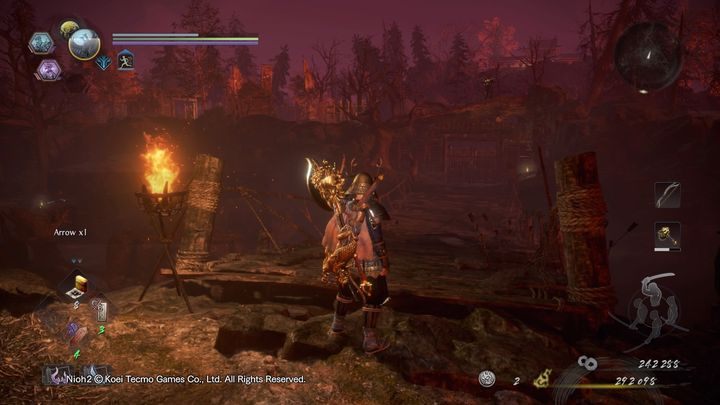 After defeating Mezuki, turn left. Cross the wooden bridge. Then, open the door at the other end of the bridge. Go back to the other side of the bridge and cross over the log on the right. You'll find duo Kappa there. Be careful, because they're pretty tough, and their attack - spinning on the shell, is deadly. Attack their backs to inflict maximum amount of damage. 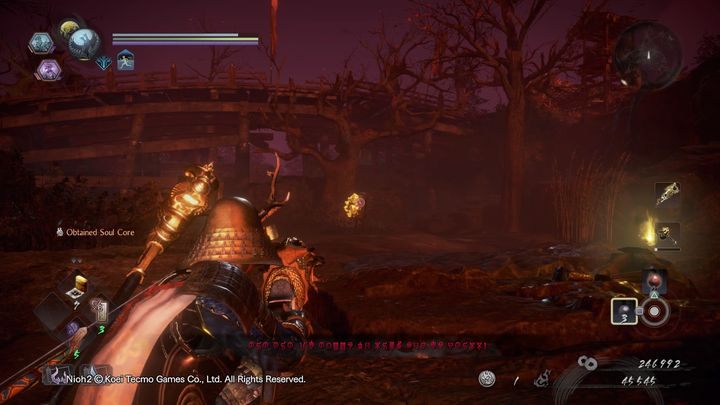 There's another Kodama behind the tree where Kappa stands. It's worth shooting down Kappa with a firearm. After all, go to the spot where you fought Mezuki and take the other way. 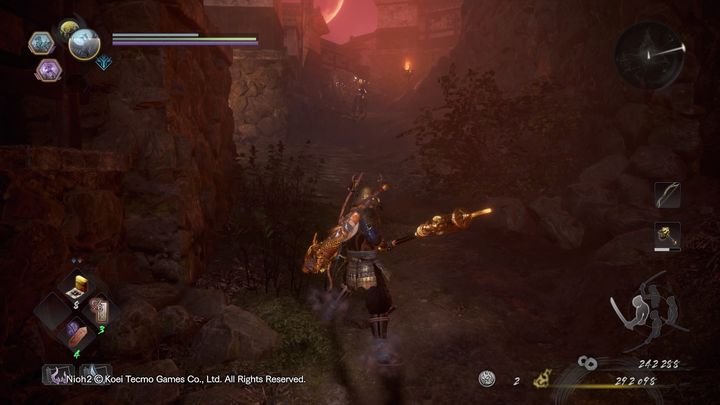 As you go up you will encounter more opponents. In addition, as an impediment, enemies will throw down huge spheres. The latter will roll down towards you. However, you can use these spheres to your advantage in the fight against your opponents. In the first stage, there will be a Yoki and a warrior skeleton on the left and a Yokai soldier on the top. Run straight ahead and turn left where Yoki and the skeleton are currently located. Wait a minute. Block the attacks until the boulder comes down. 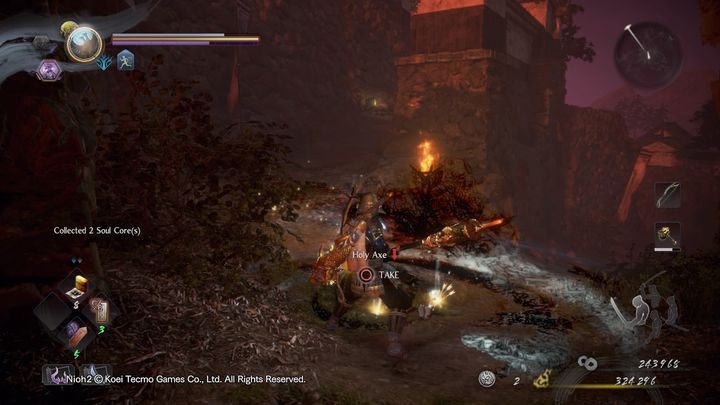 Once that's done, go up, turn a little to the right and move back. Another boulder will fall, and with a bit of luck and timing this boulder can inflict a lot of damage to enemies. Of course you can do this in the traditional way, that is, by killing your opponents in the battle, but this way is more effective. After defeating Yoki, a Yokai soldier and a warrior skeleton, climb up. There, you will come across another enemy - large skeleton warrior. 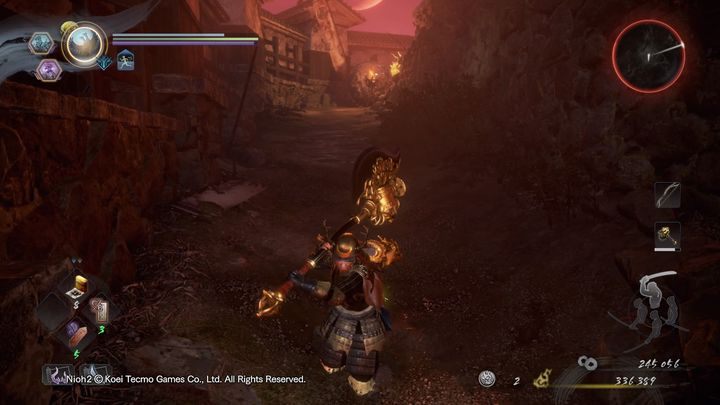 Keep climbing up but beware of another rolling boulder. Come a little closer to the boulder and when you see it rolling towards you, retreat to a safe spot. This boulder will smash the wall behind you. Behind the wall is the last crystal and Kodama. 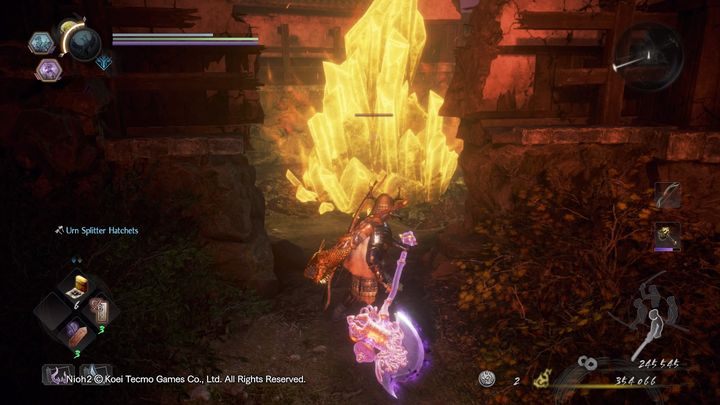 After destroying the crystal, go up. A Kappa is hiding in the bushes on the right. Take care of her first. At the very top, you will have to fight against a Magatsu warrior. Watch out for his electrocuting attacks, flank him from behind and launch strong attacks in medium/high battle stance. 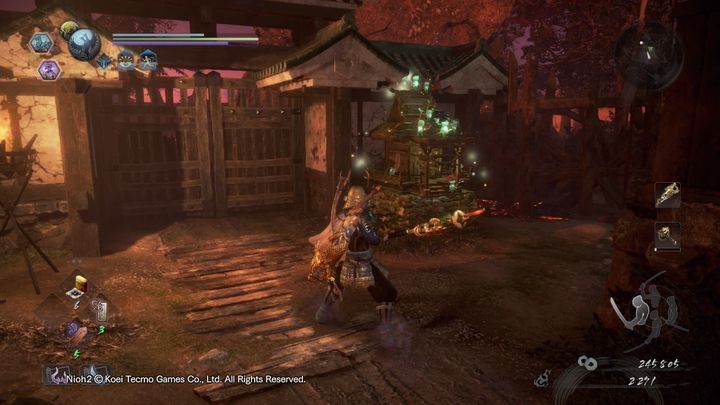 At the very top you will find the fourth Shrine and the door to the arena with the boss who disturbed you earlier - Daidara Bocchi. The description of the boss fight can be found in a separate chapter of this guide.