Imminent destruction is the first major mission region 5 in Nioh 2. This page of the guide contains a walkthrough for this mission.

Getting from the first shrine to the next doesn't take very long. First, go to the chram, improve your character and walk towards the big bridge. On the other side is a second chram. On the bridge, you will have to fight several opponents. 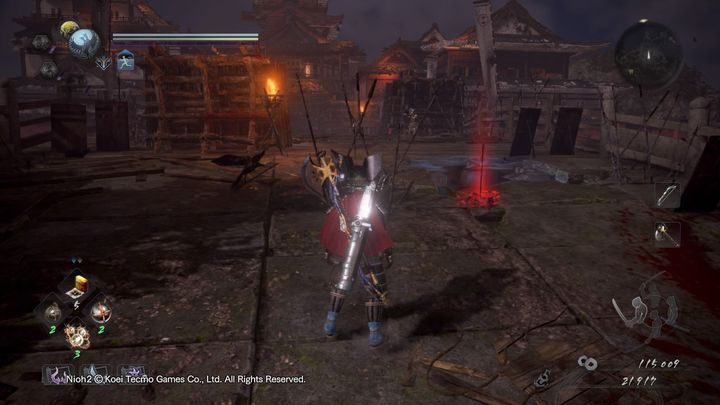 On the right side, behind wooden cover, there is a skeleton rifleman. Either kill it from distance, or quickly approach and execute. The second skeleton is next to the second cover. There also is a larger warrior skeleton in the middle of the bridge. Going further ahead, you will find the mist from which Yoki emerges. Fight, and then0 keep moving forward. 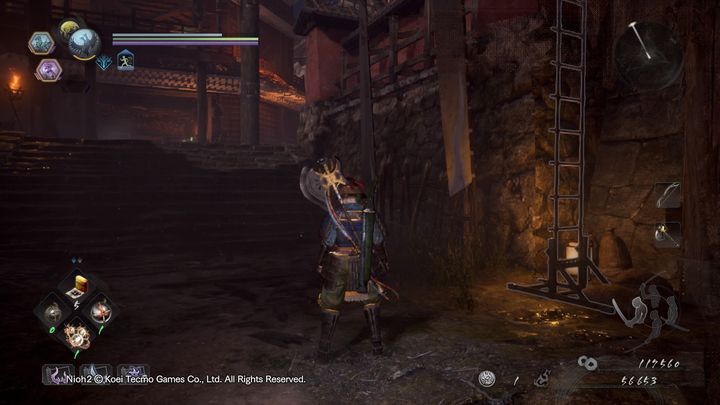 Before you go any further, climb the ladder to the top, where you will find the first Kodama behind an open chest. However, watch out for the warrior skeleton if you haven't shot it down on the mountain earlier. Go down after collecting the Kodama and continue forward to the second chram. 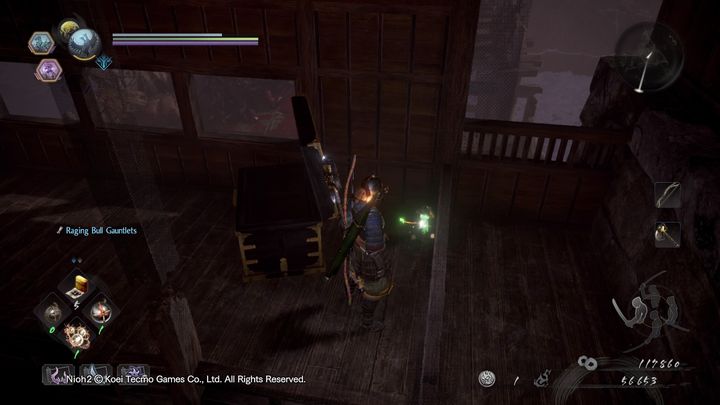 Around the second sanctuary, there's a large number of lifted ladders and closed doors, each opening a new shortcut. Enter the building where the chram is, the only way is the one to the right. Go that way, and you'll meet Yoki on the ground floor, who will be looking at the corpse. There's a door behind Yoki that you can open, but don't do it just yet. Go up the ladder. 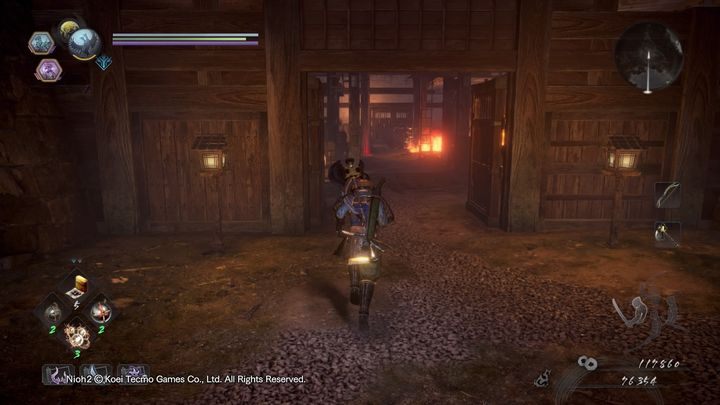 At the very top, right in front of you, there will be the shooter - it's a good idea to take him down now with a headshot. 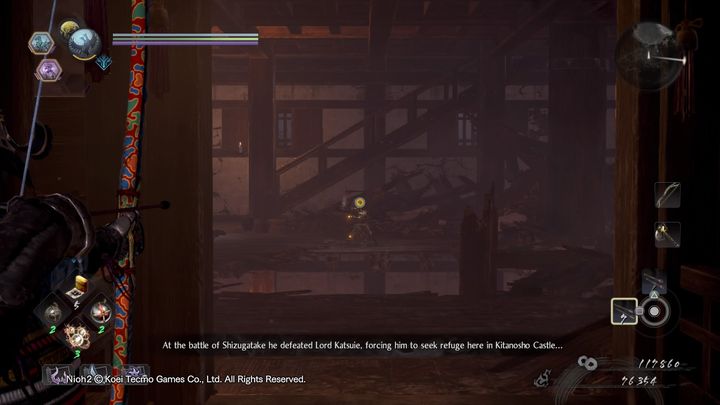 Close to the defeated enemy, there will be a Yokai soldier who stands up as you approach his corpse. On the left side, behind the boxes, is another Kodama, and on the right is a gap - you can jump down and pick up an object. 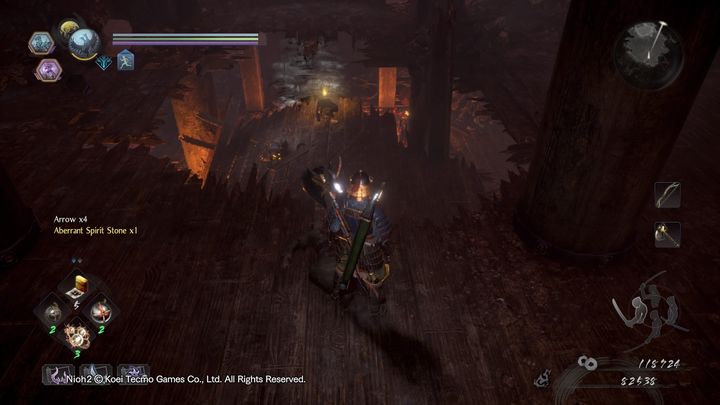 But watch out for the skeleton that will stand up as soon as you get close to the corpse. At the very bottom, you'll see the fog from which Wheelmonk will emerge. Be careful, because the room is tiny, get behind him if you can and attack right there. After defeating him, open the door, which is in front of the chosen opponent. This will unlock the first shortcut. Back up and take the stairs up. 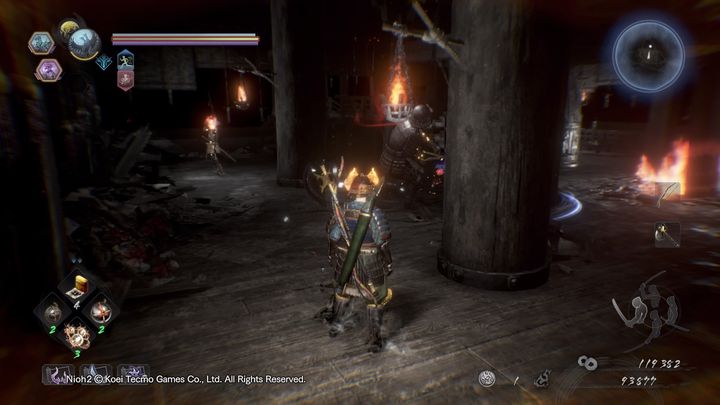 At the very top, you will enter the realm of Yokai, where you'll find a skeleton archer, a larger skeleton warrior and the Yoki on the right. By defeating the warrior's skeleton, you will free the location of the Yokai. Take the archer from a distance, then take on the warrior, and only then deal with the Yoki (you can deal huge damage with back stabs). 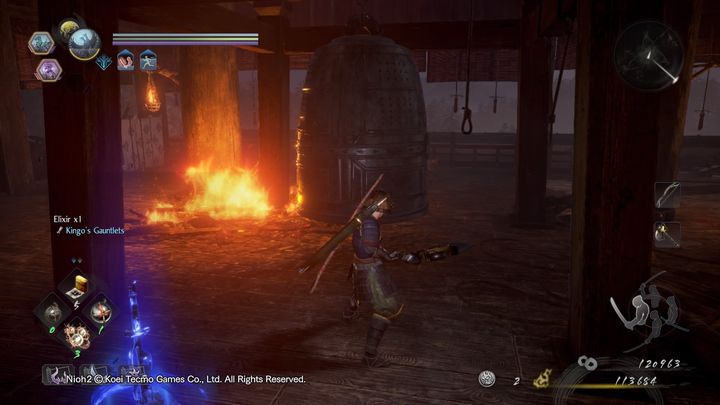 After clearing the location, you can hit the bell here as part of the achievement that has you ring 6 bells in different locations. 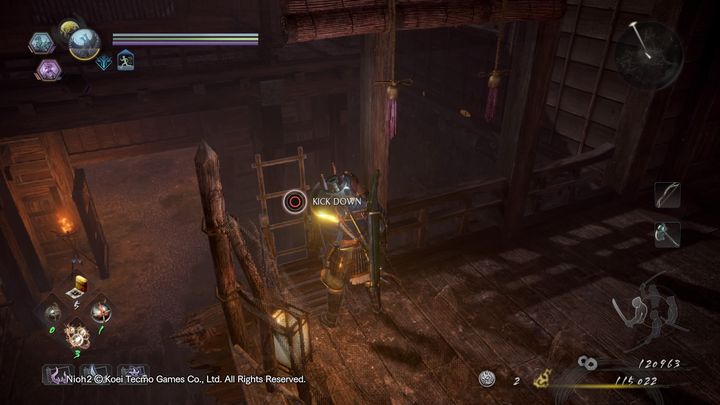 At the defeated Yoki, there is a staircase that leads to the bottom, and there is a ladder that, when lowered, gives access to another shortcut near the second chram. After lowering the ladder, go right. Inside the room, you can go either left or right. Go right first, defeat a minor skeleton. 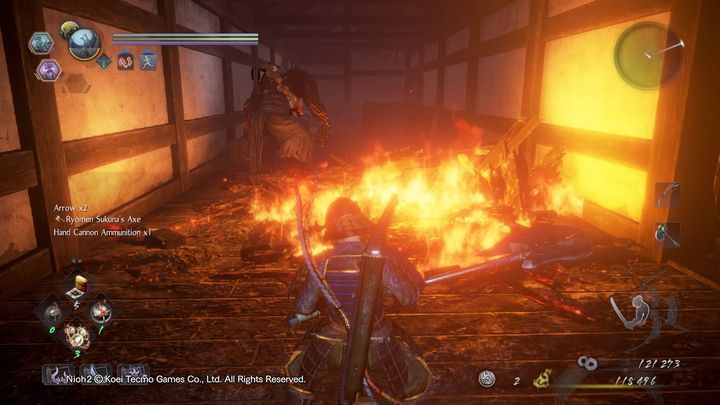 Onyudo is at the bottom - watch out for the fire when fighting - he is immune to burn damage. It is best to wait for his Burst Attack and perform a good Burst Counter, inflicting heavy damage on him. Next, on the right is a door that unlocks another shortcut. At the very end of the room, entering the new room, you will encounter Tessa. Kill him, and open a small box. Go back to the place where you fought the skeleton, there's a red barrel and a cracked wall. Shoot the barrel with a projectile that will cause it to explode, go inside the building, and you'll find another Kodama behind the wooden boxes. Go upstairs and go left. 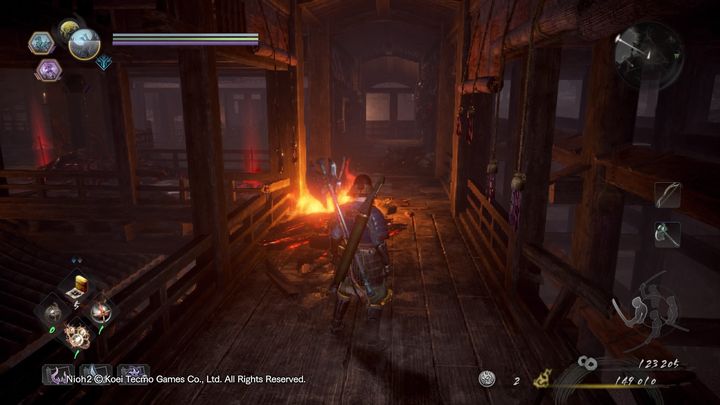 As you move on, you will have another two paths in front of you: one leading straight ahead, where you will find a door that is still locked (you will unlock it later), several soldiers, a ladder that you can lower down, and a Sudama. But it's not time to go there now. Go left instead. 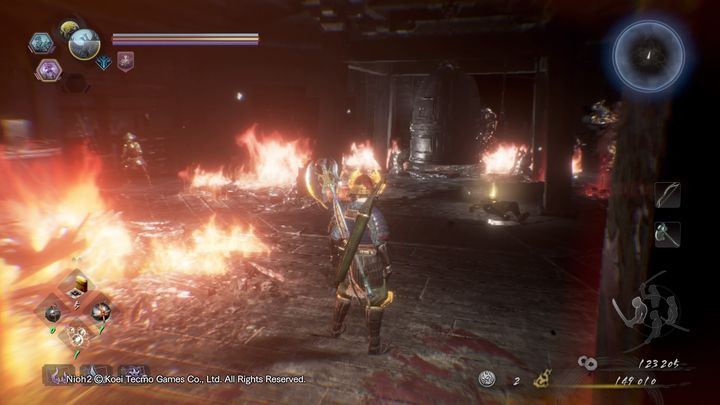 There is another Yokai realm there, and a bell to strike after clearing the location. This location offers a smaller warrior skeleton, Ippon-Datara, and Wheelmonk. Take on the skeleton first, and Ippon-Datara last. You can also hit the bell to inflict heavy Ki damage to opponents in the room. 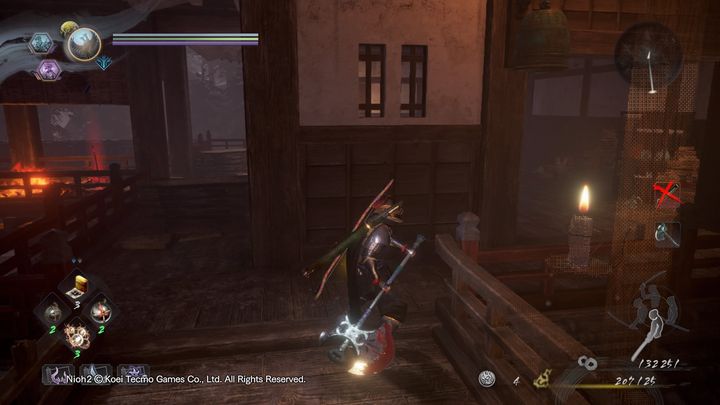 After defeating your opponents, go to the top. There is another Tesso and a Yokai soldier there. After defeating them, head to the right and jump down into the gap. There, you will find Kodame, who will unlock doors for you. Go downstairs and open the door. 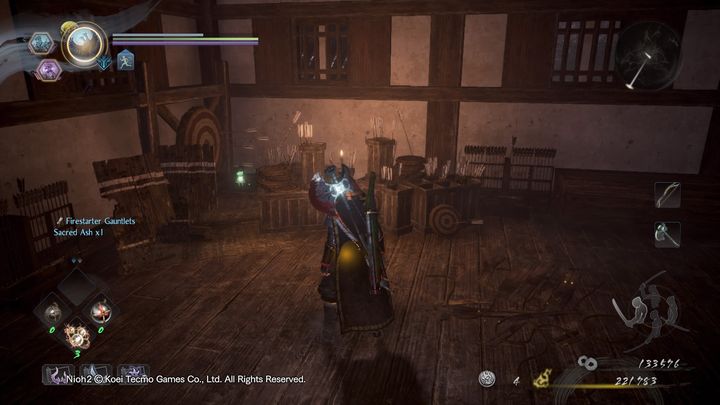 Before you enter the room behind the open door, turn right. There will be another bell, and some enemies to beat. 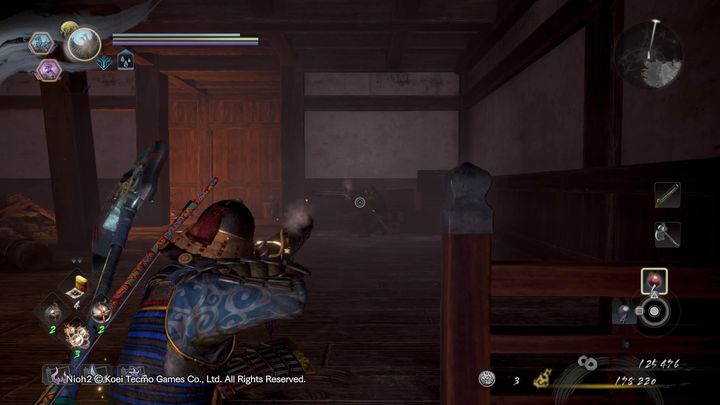 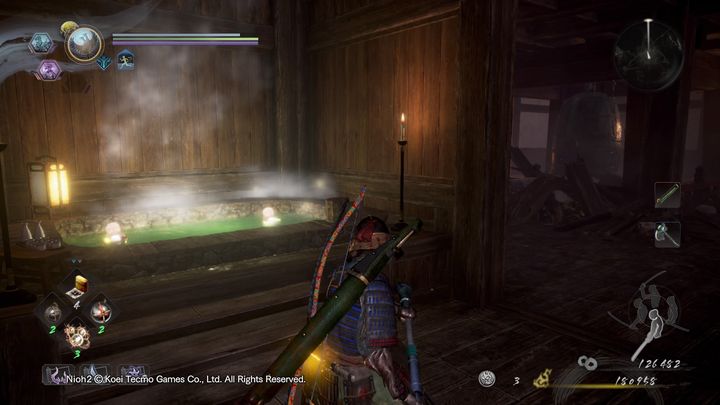 Rest in there to regenerate your strength and recover health. Now go to the room where you opened the door. There's a Yokai realm inside. You will have to fight two skeleton warriors, Oni-bi and Koroka. It's good to shoot down the skeletons and then take on Koroka and Oni-bi. By killing Korok, you will clear the location. There is another bell there; hit it, and open the chests. 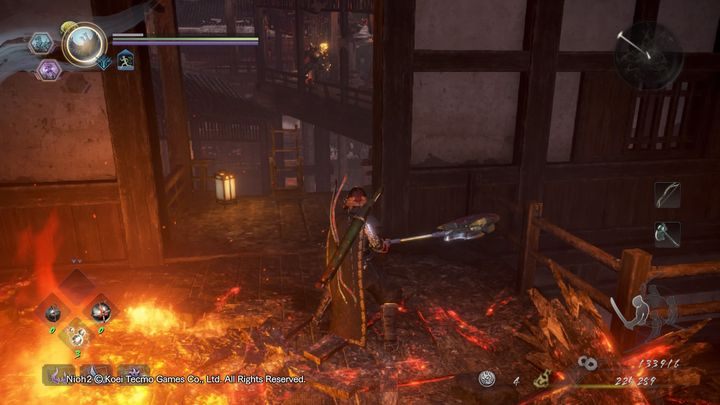 Now go back to the top and go left. The passage will be on fire, and behind the red barrel, there is an opponent. Shot the barrel first, so as not to be surprised. Defeating the enemy will let you reach the ladder located on the left, which will unlock a shortcut to the boss fight. Lower the ladder, preferably rest at the chram and climb up the ladder again. Moving on, there's a Yokai soldier in front of you, while on the left is an arena with a boss, Maeda Toshiie. This boss fight is described in the corresponding section of this guide. 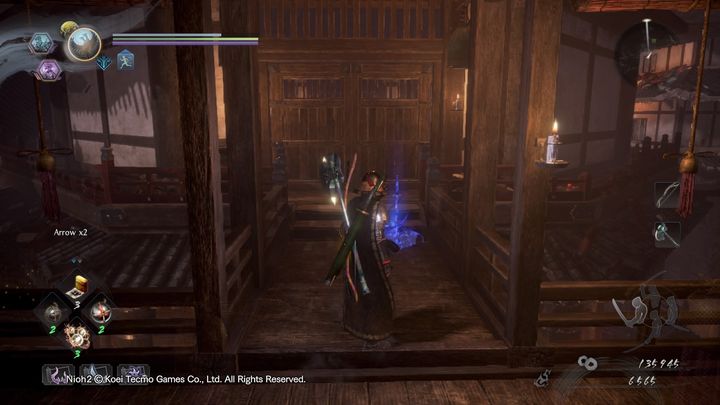 After defeating Maeda, open the gate in front of you and activate the third chram.

At the third shrine, go up the stairs. Open the door, you will now enter the Yokai realm, where you will have to defeat Oni-bi, Korok and a Yokai soldier on the upper floor. First, though, take the ladder down, where you'll have to fight Wheelmonk. 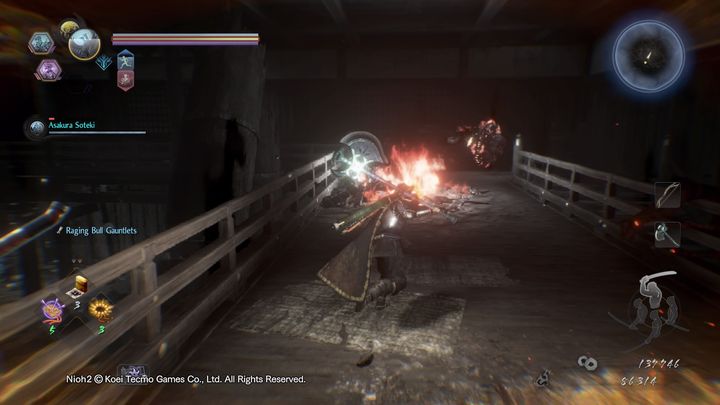 On the lowest level are Onyudo, another Yokai soldier, and Ippon-Datara, the creator of the Yokai realm. By killing him, you will clear the location of the adverse power. In addition, there is another bell at the bottom that you can hit. 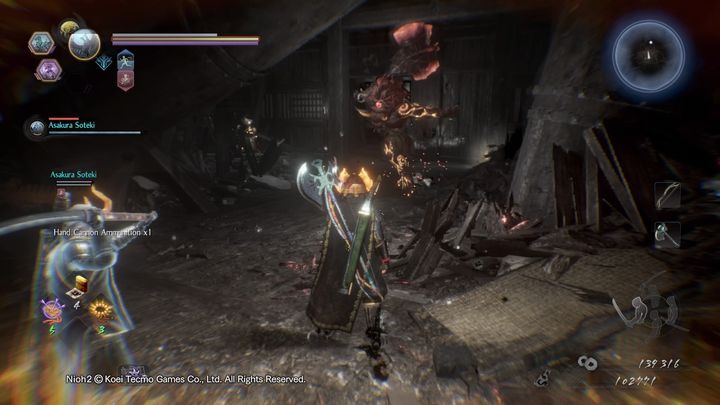 After defeating all the opponents in the lower part of the location, there is still Nurikabe left. After defeating him by gesture or normal combat, step forward and pick up another Kodama. 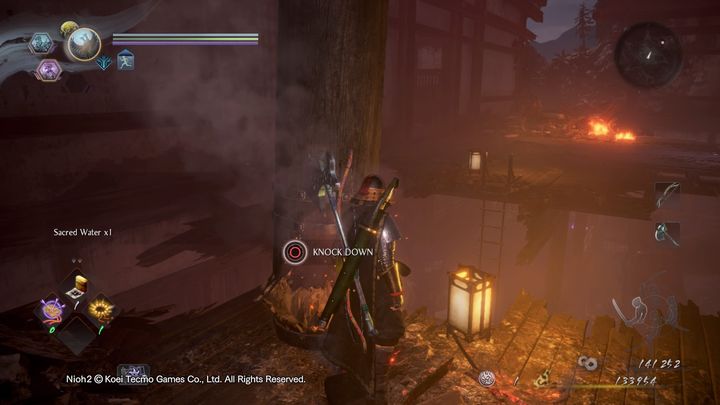 At the top, deal with remaining opponents - to the right of the defeated Korok, there's a log you can flip over to the other side to unlock a shortcut to the arena with another boss, Shibata Katsuie. The strategy for this boss fight can be found in a separate chapter.