Bird in a Cage is the third main mission from the third region of Nioh 2. This page of the guide contains a walkthrough for this mission.

At the very beginning, pray at the shrine and go straight to the cave, which is on the left. That's where you'll see a locked door that will be opened later. Continue but watch out for wooden barrels which when destroyed cause your healing capabilities to be lowered, moreover when you actually heal the hero, he will become nauseous and you won't be able to control him for a while. 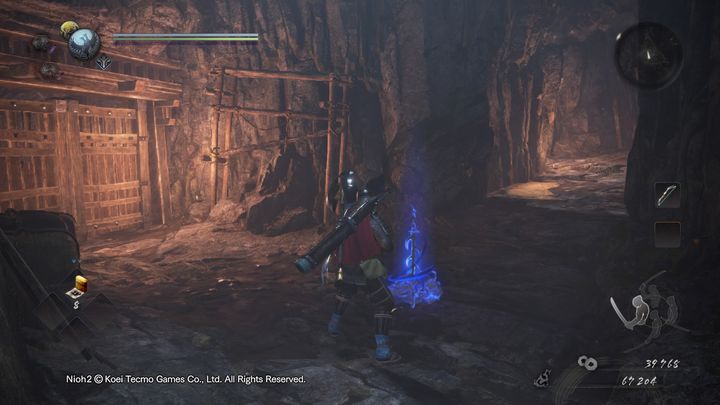 To remove the negative status, you need to destroy water barrels. They are located at the exit of the cave. 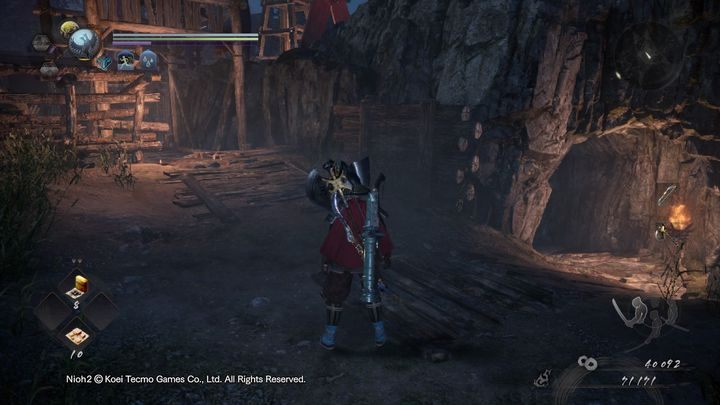 On the right there is a cave where you will fight spiders. Enter it, as this is the safer route, as both pathways lead to the same location. 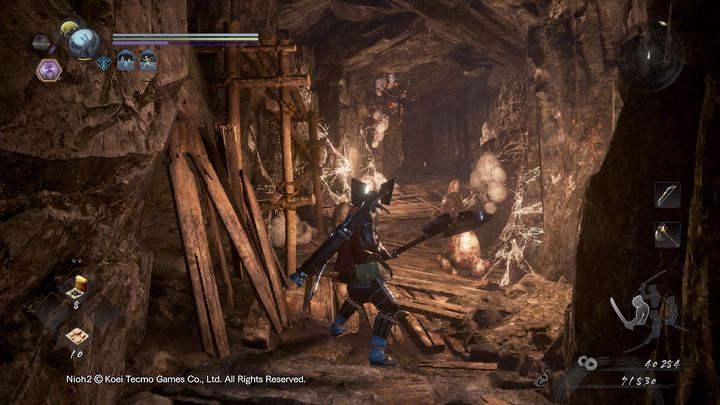 Watch out for the cocoons - if you step on them, there's a chance that the little spiders will hatch out of them. Also, look at walls and ceilings because spiders like to sit on them - if they land on you you may receive serious damage. 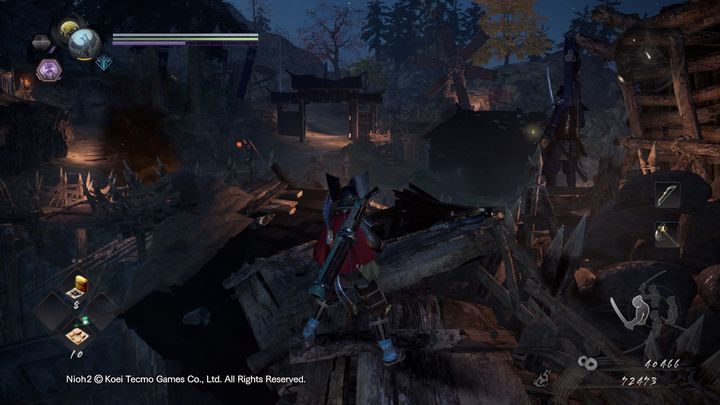 Coming out of the cave, there is an enemy on the right, kill him from behind. On the left side there is a wooden bridge - use it. You should see an entrance to a cave on your left, it is guarded by one soldier. Defeat him and continue to the cave. 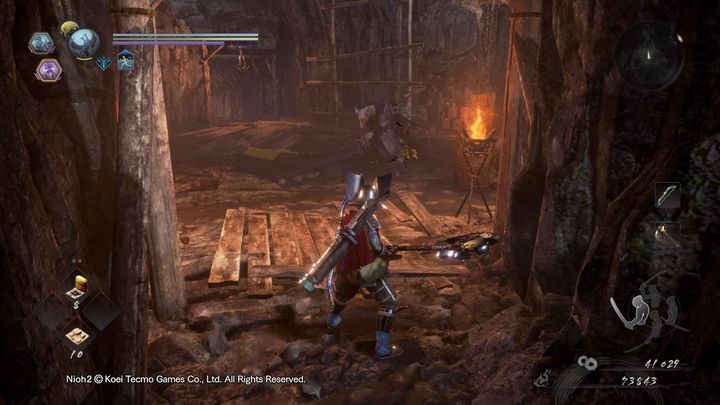 Inside, you'll find a new Yokai, a Tesso. The enemy is characteristic for its sharp claws and farting attacks. Its attacks put a Stench status on your character that lowers your healing capabilities. It's weakness is his tail - hit it there. Watch out for its Burst Attack - the enemy starts running in your direction waving its claws, or it aims its tail and jump at you. 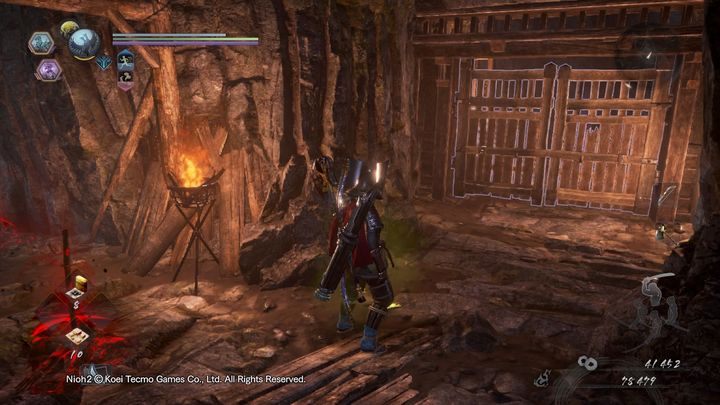 Continue forward - you'll encounter a door that serves as a shortcut. On the left side there is an item, but watch out for a spider on the ceiling, as it will inflict serious damage if it jumps on you. After opening the door, step back and exit the cave. 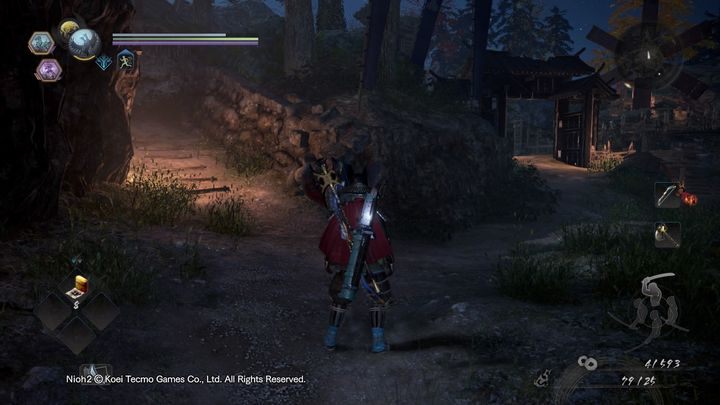 After leaving the cave, look to your left where you will find a native who handles cannons. Kill him so he doesn't interfere with further exploration. 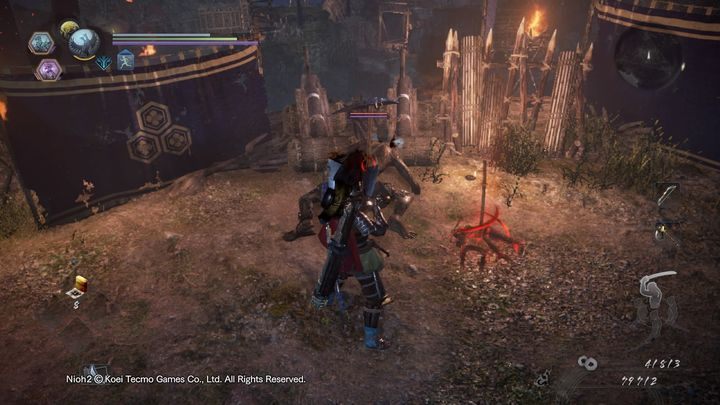 After defeating the native, use the cannon on the left, as it will destroy one of the observation towers. Also watch out for a dog patrolling the area. 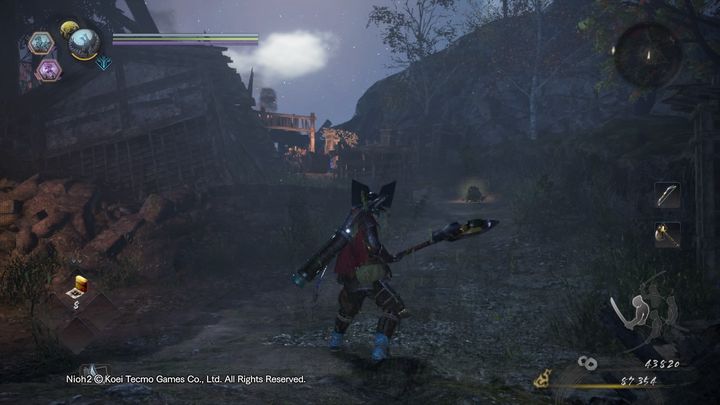 Go up and left to find another dog. Don't go through the main road, as there is a Yoki at the top of it with a barrel which it will throw in your direction once it sees you. At this point, consider going a little to the left and throw a bomb at the barrel, or something that places a fire status (e.g. a fireball). It'll make it easier for you to fight the Yoki. 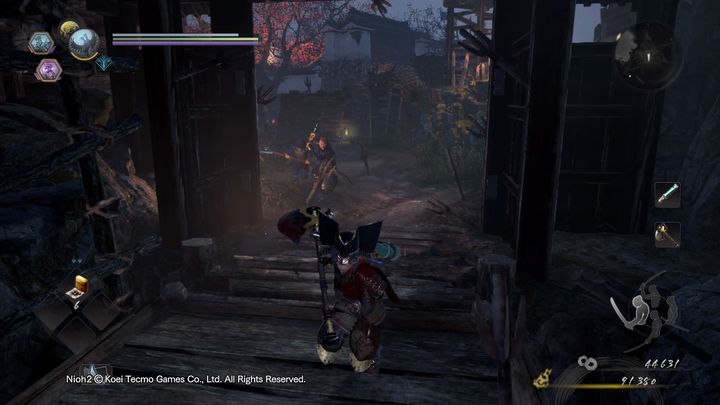 There are a few soldiers behind the gate, but be careful, as the watchtower on the right contains an enemy that can blow his horn and provoke all nearby opponents to attack you. Keep going but stay near the left side - you'll find another entrance to a cave. 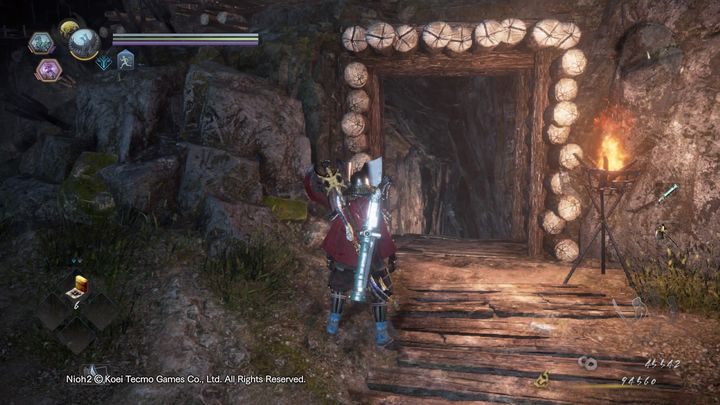 Continue down this road but watch out for opponents. Keep looking at ceilings, as there are spiders waiting to drop on you and kill you. 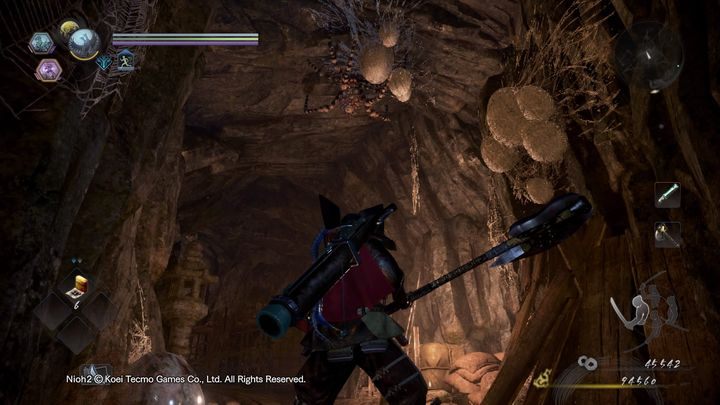 Moreover, avoid stepping on cocoons as when destroyed, they hatch smaller spiders which are hard to hit following their size and how some weapon animations play out. 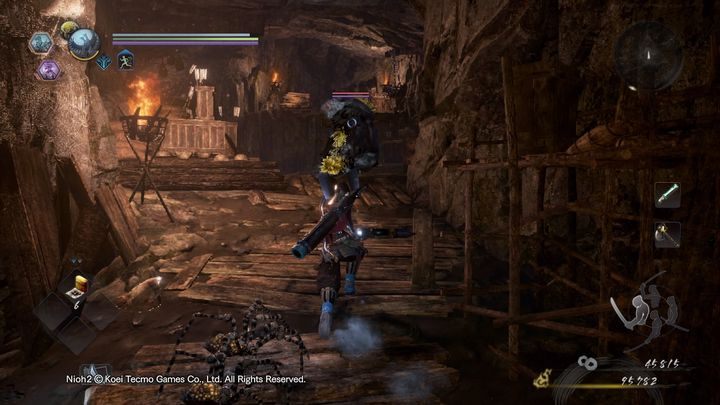 Go ahead and watch out for spiders and a few Tessos. You can pick up interesting items there, but the number of enemies is quite large. 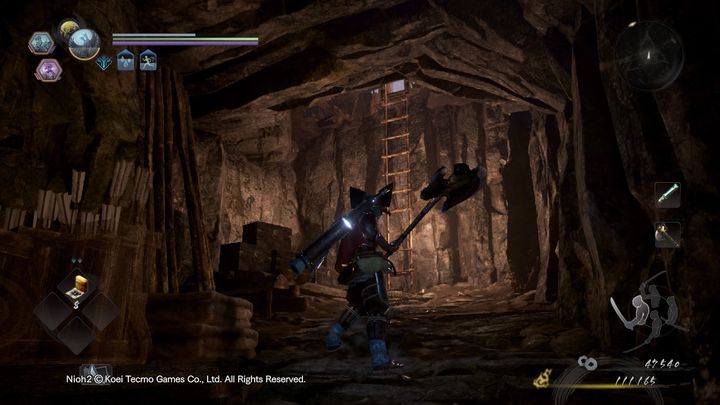 At the very end of the cave, on the left side, there is a ladder that will lead you outside, climb it and watch out for other opponents. 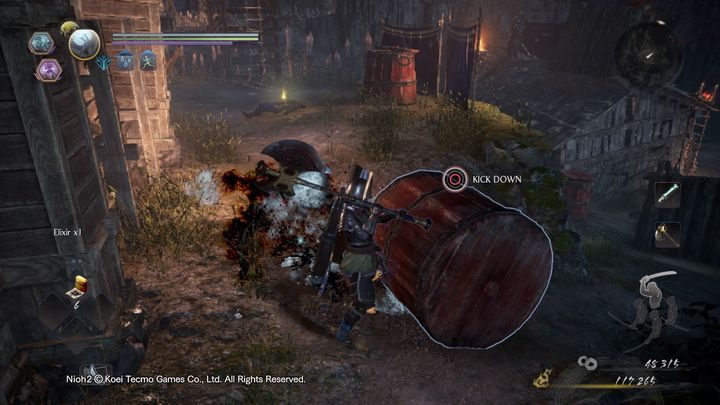 At the top is a Yoki and a single sharpshooter. You can make the fight easier by shooting a barrel, or simply pushing it down to defeat a few soldiers. 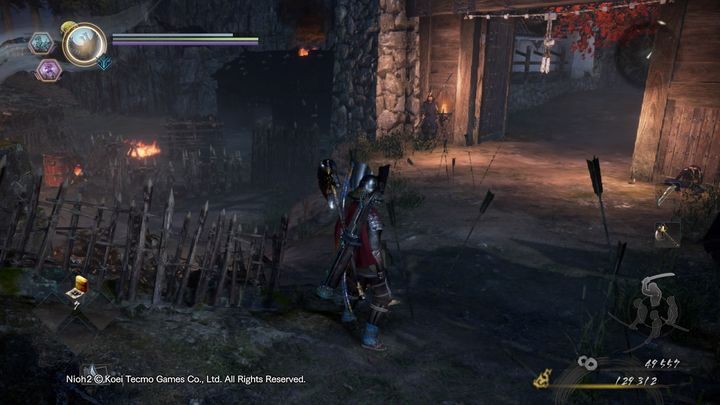 Once you've beaten them, go further ahead to find a second shrine.

There is a Yokai Realm nearby the second shrine - its heart is a Koroka, which will appear in the middle of the realm next to a Native. 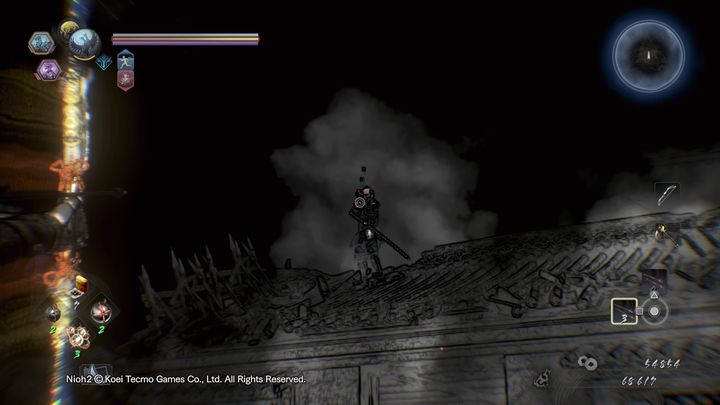 Moreover, watch out for sharpshooters on the roof, deal with them first so they won't interfere during the fight against Koroka. 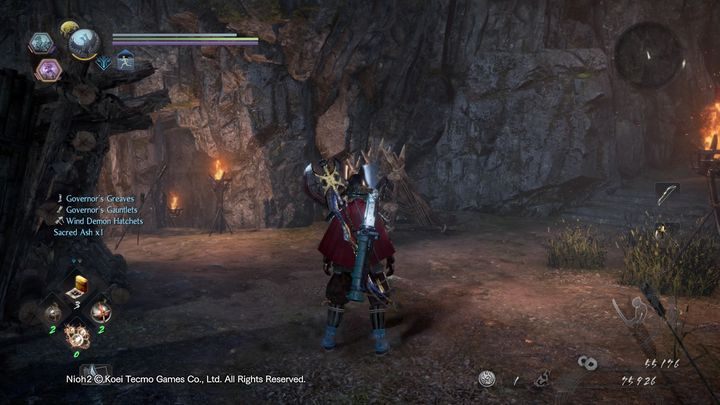 After clearing the location from the Yokai Realm, you can go up the stairs or into the cave. As you go upstairs, watch out for another barrel that Yoki will throw at you. Go up a little, then quickly run down. Instead of going up first, enter the cave. There is a Scammpus on the left. 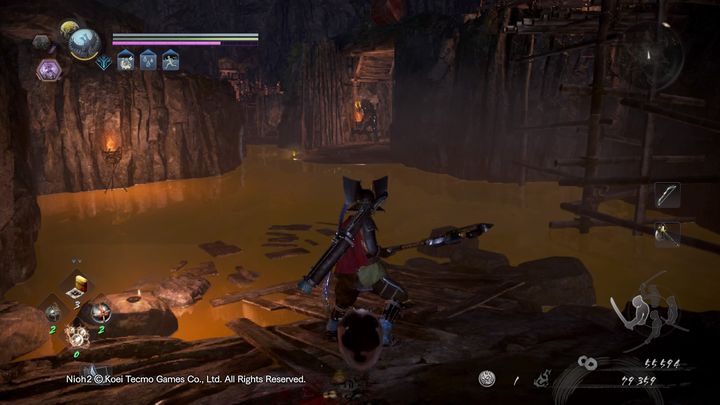 As you venture deeper in the cave, you'll encounter a field that places the Stench effect on you. Also, there is a Namahage in front of you. Shoot him in the head to weaken him significantly. 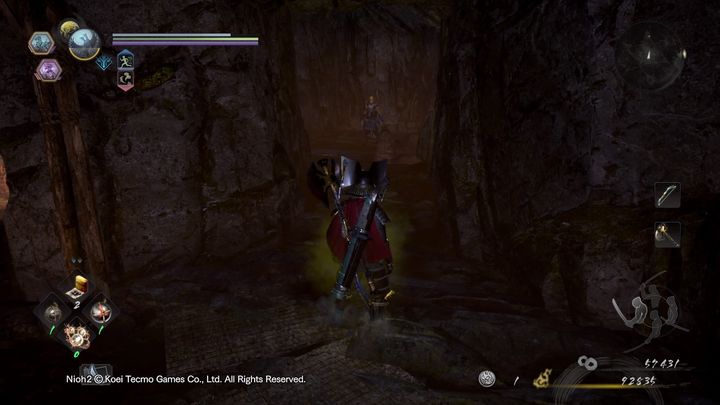 On the upper floor of the cave, you'll meet an NPC who will ask you for something to eat. Instead of the potion, give him the dung balls you might have collected before. In return, you'll get some interesting things, such as a new gesture or Amrita crystals. 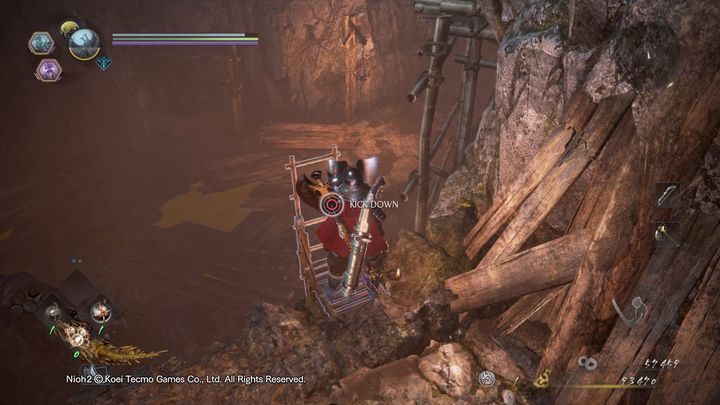 Step back a bit, there's an item on the left, but watch out for a spider that's hanging from the ceiling. Go further to the right, and a little further you will find a ladder that you can lower, which serves as a shortcut to the first shrine. After lowering the ladder, leave the cave through the exit located at the bottom of it, near the area where you fought Namahage. 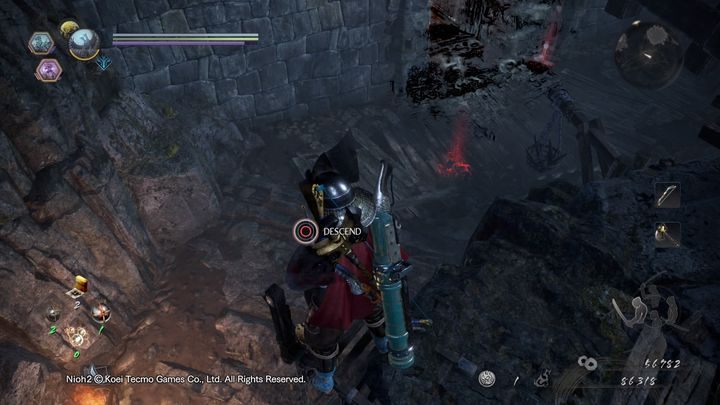 Look out, as there is a Yokai Realm nearby from which a Waira appears. Attack his abdomen, but watch out as he can fall on his back. 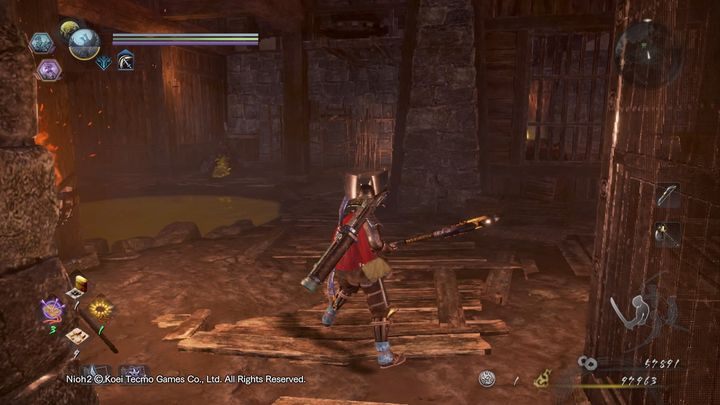 Go inside the building Waira was guarding. Turn left first, but watch out for another Tesso. 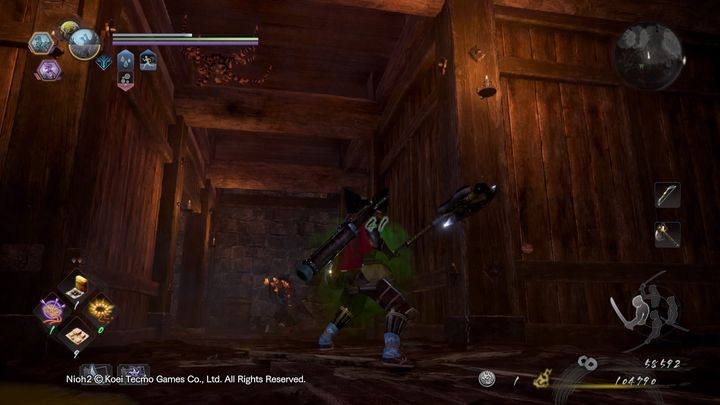 Next you'll encounter another Yoki and a spider that's on the ceiling. Deal with them and turn left as you walk up the stairs to the top. 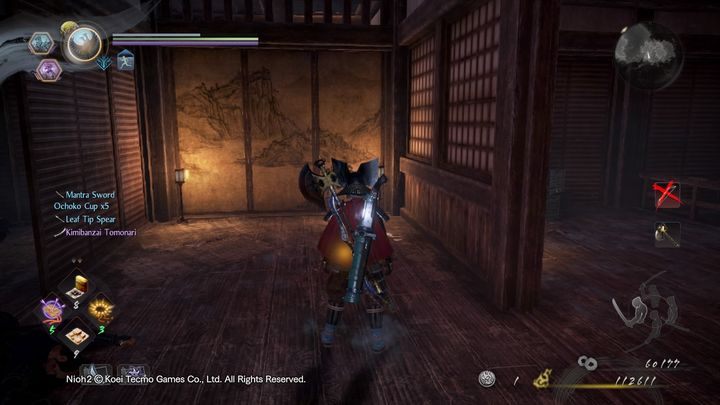 Watch out for the two soldiers in front of you, it would be good to shoot them from a safe distance. On your right, there is a painting, and a soldier behind it. If you get close enough, the soldier will rip through it and start attacking you. This is the path you should follow. That's where you'll find the next, third shrine.

You currently have two paths to choose from, one leading up the stairs to the top (shortcut) - skip it for now, as first you need to activate a certain mechanism which will rotate the top pathway and unlock the door from the other side. To do this, go to the next painting (shown in the screenshot above) and destroy it. On the left there is a room with giant spiders, and a way leading up the stairs. Go there first. 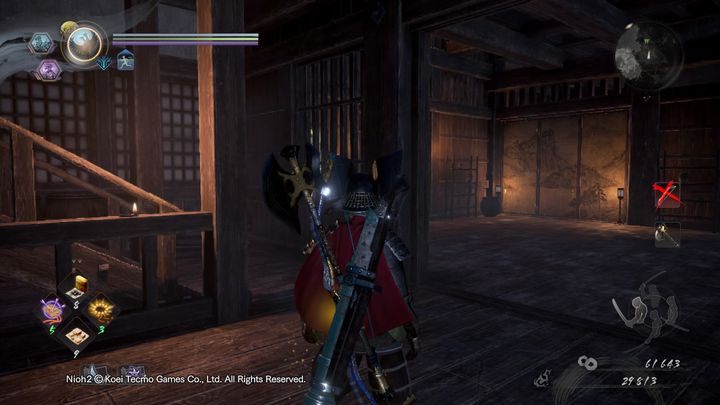 At the top, follow the red footbridge to the other side. There is a Yokai Realm there, and on the right side of this room there is a lever that rotates one of the two passages that lead to the arena with the boss. 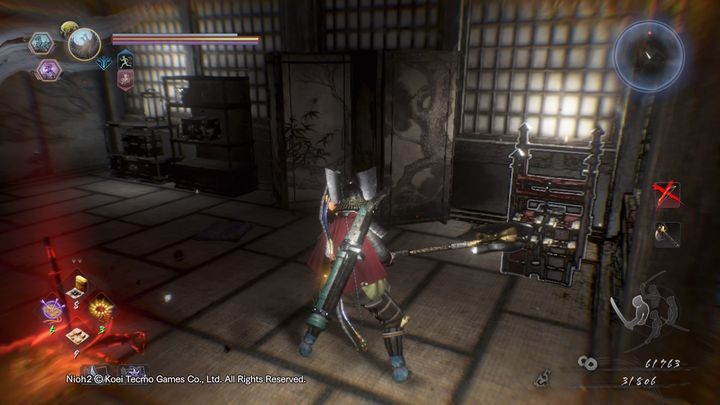 Pull the levers and continue forward. Be careful, however, as behind the curtain there is one Native, followed by Yoki, Namahage, and a larger Warrior Skeleton. The best solution is to pull them out one at a time. Yokai Realm will dissapear the moment you kill Namahage. 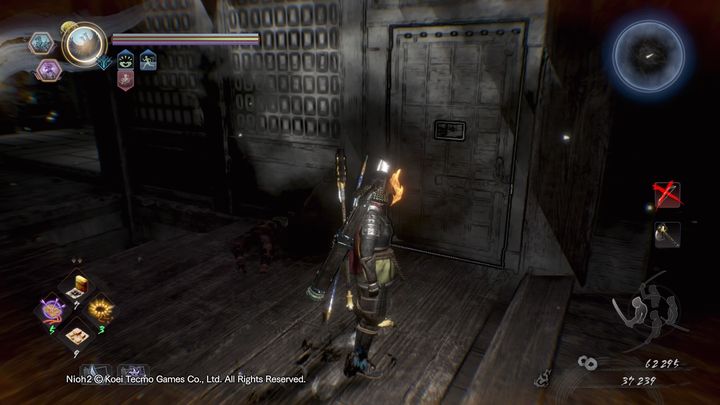 At the end of one of the corridors, you'll find a shortcut, open the door, and the stairway near the shrine will be open to you. Now turn around and follow the corridor, you will encounter a single skeleton that will aim its firearm at you. 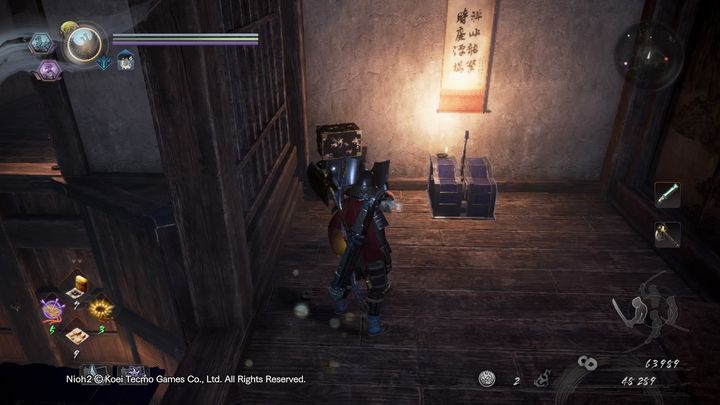 Now walk across the blue footbridge to the other side and pull the other lever. This will give you access to the arena with a location boss. Open the gate, go down, use the pre-opened shortcut and follow the footbridges to reach the arena with the boss. 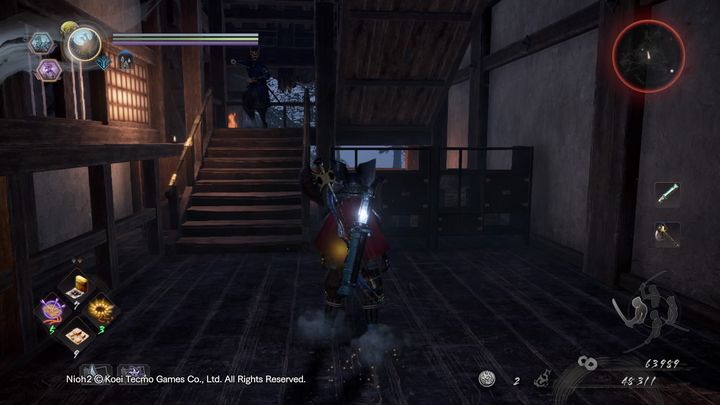 Climb up the stairs, defeat one opponent who blocks your way, and open the door to fight the location boss, Azai Nagamasa. The boss fight is described in a separate chapter.