Corpses and Ice is the second main mission of the third region in NiOh 2. This page of the guide contains a walkthrough for this mission.

Go to the nearby shrine and then talk to Mumyo - she will accompany you. A single soldier is on the left side of the building. A little further on, you will come across two soldiers. The main path will be on the right. 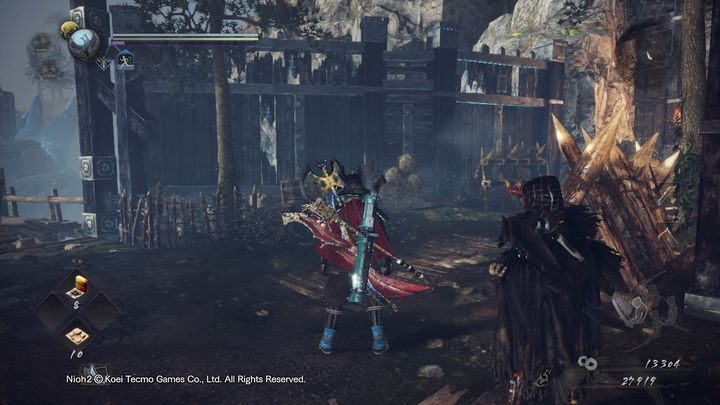 Once you have beaten these two soldiers, follow the main path up. There you will encounter one soldier downstairs and a few on the roof. Turn right behind the building presented in the photo - there is a road going up that is corrupted by the Yokai Realm. 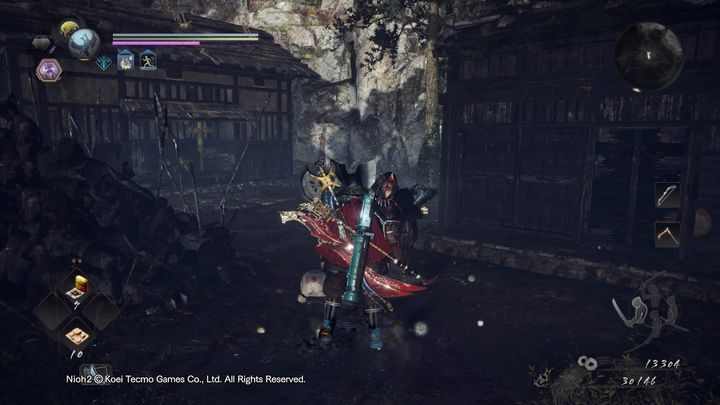 Going up, you will have to fight several Yokai such as Gaki, Enki and a skeleton warrior. Before you go there, however, notice a staircase to the right, where you will see a ladder that serves as a shortcut. 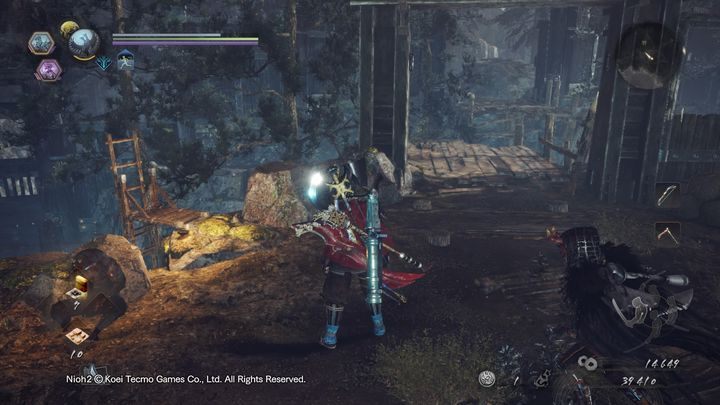 Now enter the Yokai Realm and go up - defeat a few Yokai. It is best to first deal with the skeletons shooting at you from the top, then deal with Enki and Gaki duo. 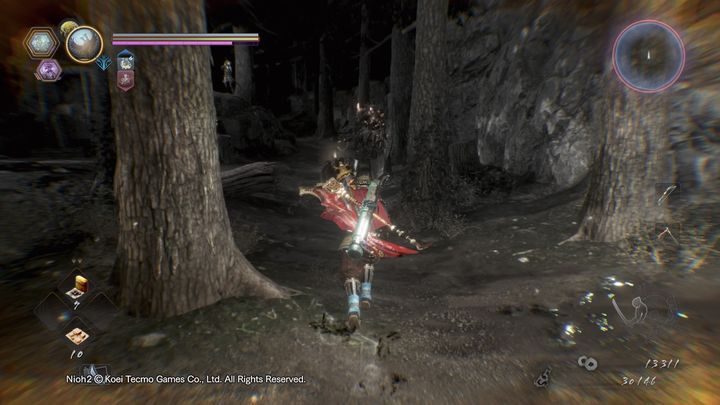 When you leave the Yokai Realm, you will find yourself on the roofs of buildings besieged by human gunmen - there is a chance you have already dealt with them. Defeat them, go forward and then down the stairs. You will see a bridge on which there is a great warrior skeleton. 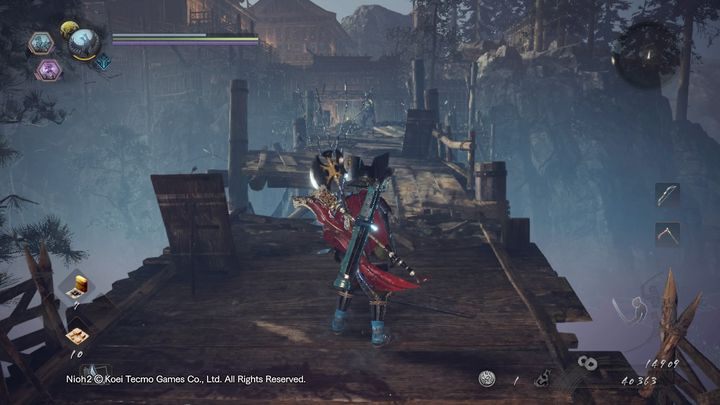 The enemy is accompanied by smaller skeletons, but they will only come to life when you get close to them. Fighting on the bridge can be somewhat problematic, so it is better to kill the large warrior skeleton with a firearm. Watch out for his Burst Attack, during which he spins his axe around - you can easily fall off the bridge. Once you have defeated the enemy, the smaller skeletons shouldn't pose any threat to you. 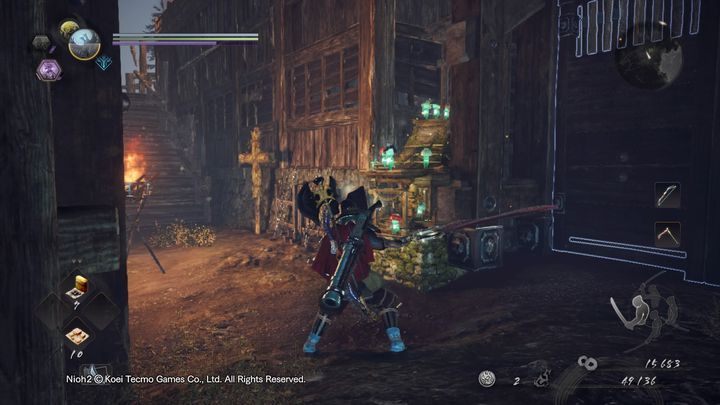 Cross the bridge and you will find the second shrine. The door to the right of the shrine is blocked and serves as a shortcut.

From now on, your main opponents will be human soldiers. As you walk up the stairs, you will encounter one opponent turned around. There are three soldiers downstairs. 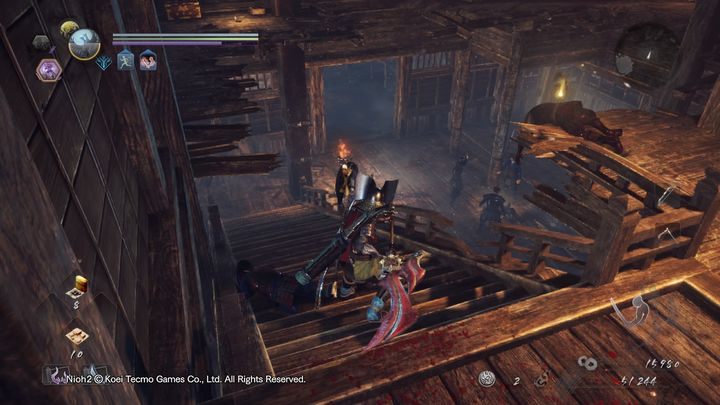 You can jump from a high and inflict deadly damage from above, or fight them in the normal way. However, it is worth being careful when you fight them as a group - it is better to kill one of them with a headshot. When you beat them, reach the bottom floor of the same building and look for wooden crates that you can destroy. You will find exit and an item. 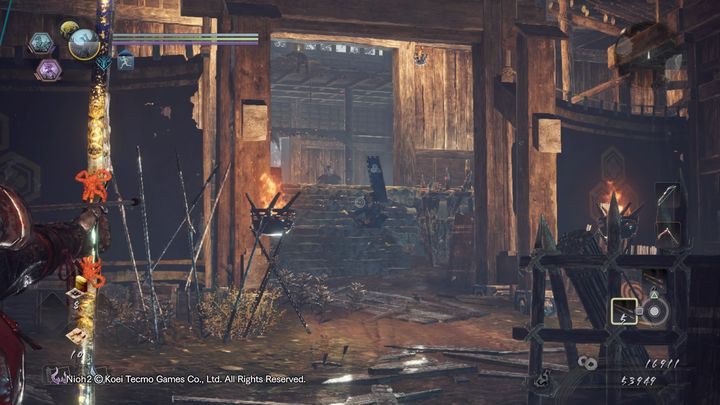 Soon, you will come across a large number of soldiers. It is worth killing them with a bow or other firearm. Be careful, because there is another soldier on the right side, at the entrance to the building. If he sees you, he will call everyone around. Kill him first. 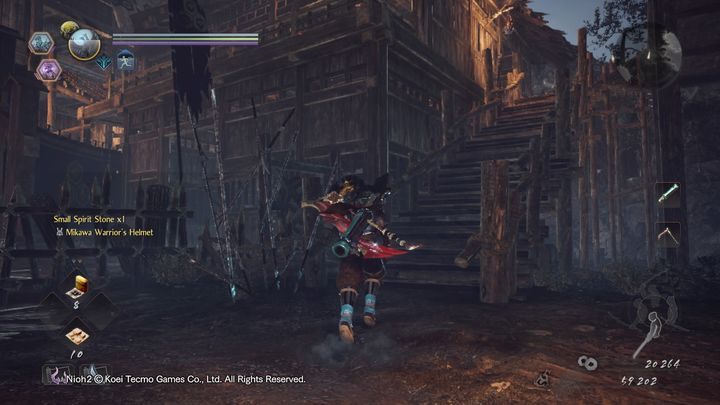 On the right, you have a building and stairs - go up and turn right. You come across a Yokai Realm where you have to fight two skeletons and Mitsume Yazura, who is the source of the Yokai Realm in this area. 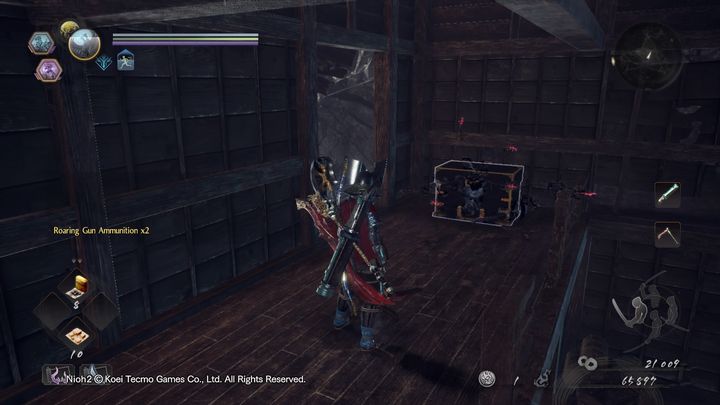 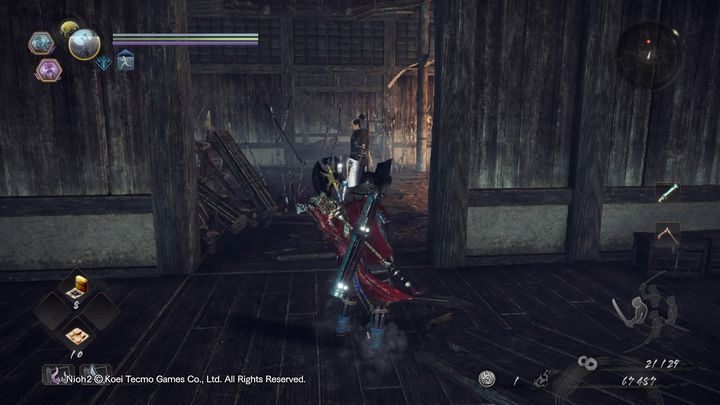 You can make this fight easier by shooting the opponent presented in the picture in the head. He is one of the more dangerous soldiers, defeating him will not be as easy as the others. Once you have beaten him, go to the gate on the right side, open it and then another one. 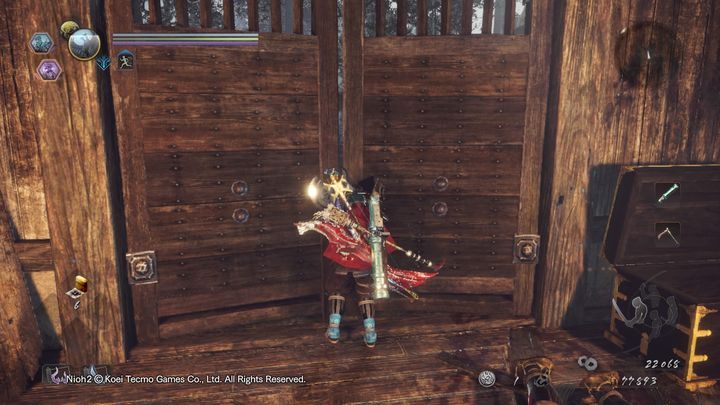 Behind it, you will encounter another challenging soldier, but this time it is a one-on-one fight. He fights mainly in a high stance, which makes him slow and predictable. Keep attacking him or get behind his back. After defeating him, open the third gate and activate another shrine.

Get on the bridge next to the shrine. You will encounter and ice Yokai named Namahage. Watch out for his range attacks and for the move where he thrusts his sword in the ground. He will perform a distance attack directed at you. Try to start this fight by shooting him in the head. Watch out for his grabs, too. 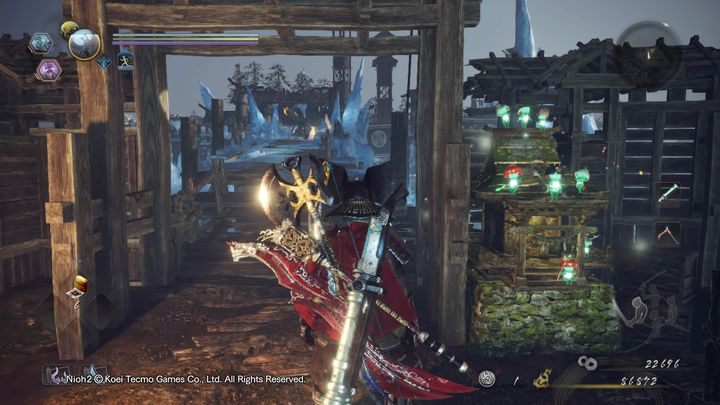 After crossing the bridge, you will find a closed gate on the right and Mitsume Yazura on the left. Defeat the Yokai and go up - you will come across a Yokai Realm. 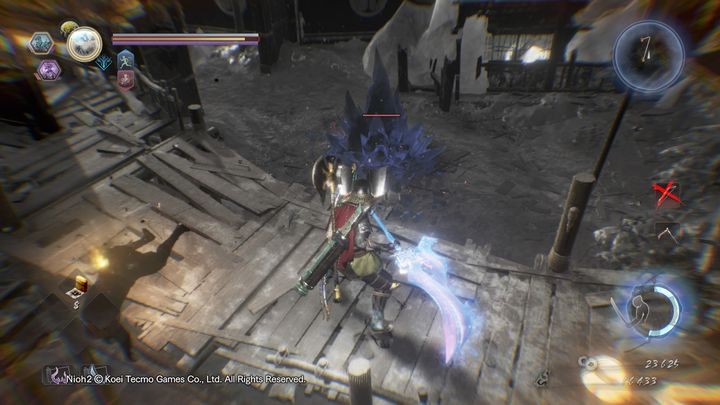 There are many Yokai here, but instead of dealing with them one at a time, go up to get past a large portion of them. Then jump down and start attacking the big blue crystal. If you destroy it, all Yokai will die - this will purify the area. After that, open the gate on the right, the one that was previously closed. 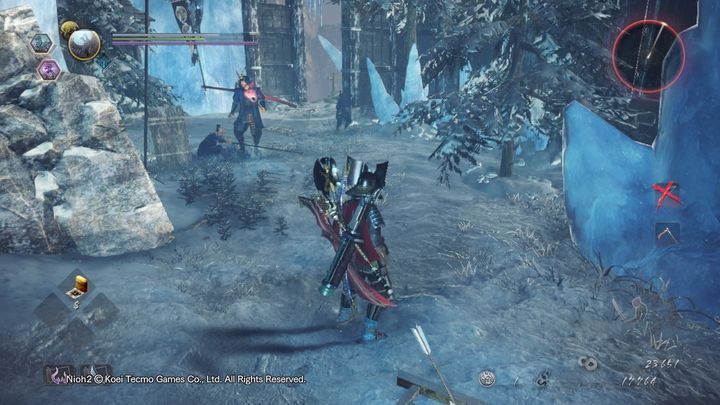 When the gate is opened, go the other way. You will come across three soldiers - try to kill the soldier with a helmet first, as this enemy is more challenging than the other two. After killing them, go ahead and jump down into the arena. Time for a boss fight with Magara Naotaka. The strategy for this boss fight can be found in a separate chapter.