On this page of the Nioh 2 guide, you will learn how to successfully defeat a boss called Magara Naotaka. 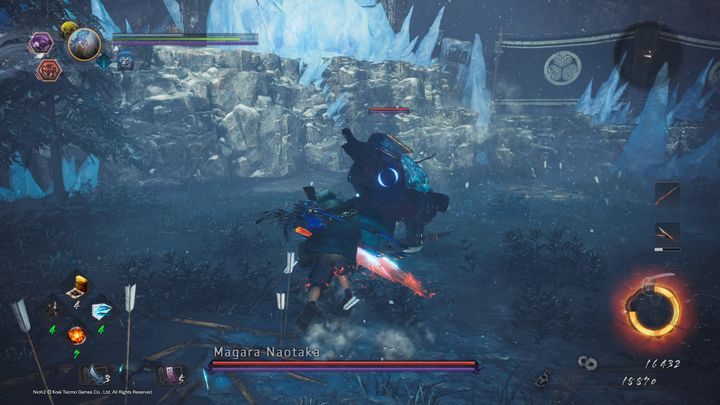 Magara Naotaka is an opponent whose attacks are mostly based on the water element. The boss is medium-sized, his attack range is quite large, he fights mainly with a Odachi, and complements it with various water attacks. Magara Naotaka is vulnerable to fire, so it is recommended to bring various talismans that imbue fire on the weapon. His standard move is a 3-hit combo.

The fight can begin with a ranged attack, as the boss lifts his Odachi up and throws it into the ground, creating a shockwave that quickly flies towards you. This is attack doesn't change its direction after firing, so you can easily avoid it by dodging to a side.

His second ranged attack is very similar, but in this case the boss holds his sword with both hands. The difference is that this attack causes icicles to appear on the ground. 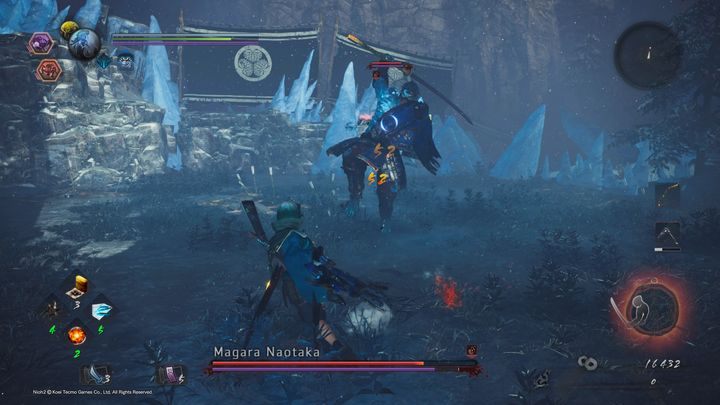 Magara prefers close combat, so he will approach you very often. When in range, the boss leads with a 3-hit combo, swinging his Odachi right, left, and finishing with a overhand slash. It is recommended to stay close to the left side and make dodges in that direction. Even the first avoided hit can end up with you dealing damage to his back. 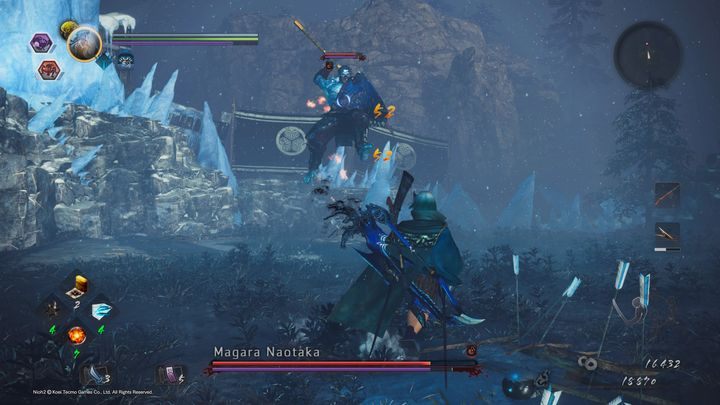 To reduce the distance to you, Magara can jump in your direction, covering a considerable distance in air. When he lands, he places his sword into the ground. Avoid getting hit, as this attack deals a lot of damage. To counter this move, perform a dodge when you see that the enemy is almost landing. 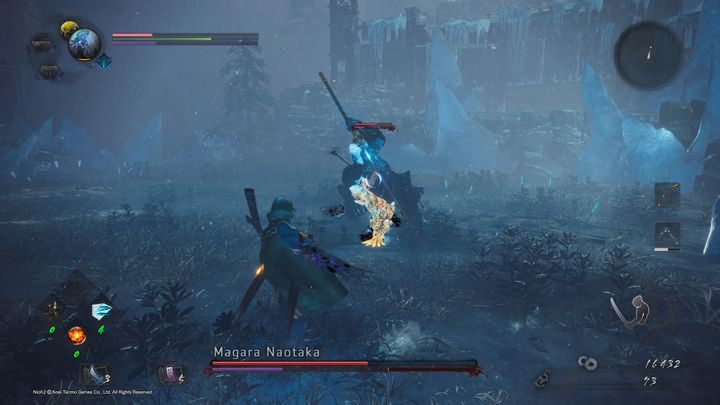 Magara can also shorten the distance to you by running in your direction, performing one Odachi hit while doing so. Moreover, if you find yourself in front of him, he starts preparing a kick that will push you away.

His Burst Attack involves placing his Odachi in the ground. After a short while, he gets it out, creating icicles which have small range. Wait for the moment when he places the sword, and perform a Burst Counter. 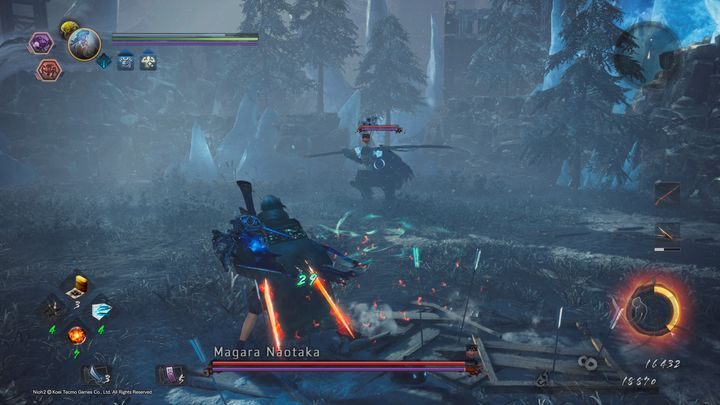 When his stamina drops to zero, he activates the Yokai Realm, where he gets a few new moves and his old ones are improved. He is more likely to use grapples, kicks, and the Burst Attack. 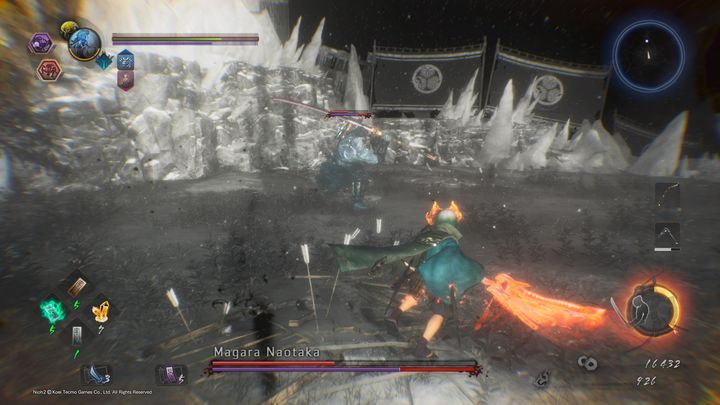 When it comes to new Burst Attacks, Magara Naotaka can now create an ice weapon that stays active for extended amounts of time. This is a dangerous ability, if you do not decide to make a Burst Counter, do it at the moment when his strikes can hit you. 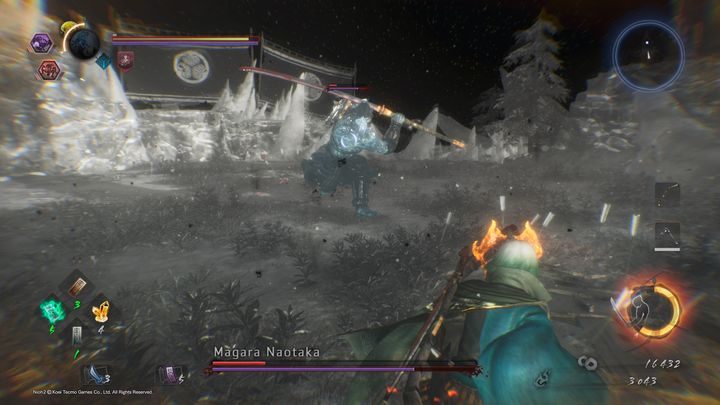 Also beware of his grapple, which has a large range. It begins the moment after performing a jump towards you - he will attempt to grab you with his hand. It is better to dodge to the side, rather than to the back. The range of the grapple can surprise you and lead to the death of your hero. 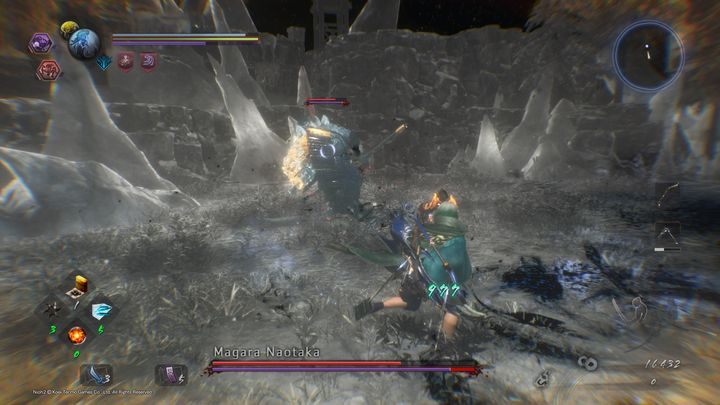 There are two ways of approaching the boss. Either wait for his attack, provoking him to use jumps and lunges with grapples in your direction, because after a few unsuccessful attacks, he is helpless for a longer period of time, or be constantly with him, performing dodges to the left at the right moment and attacking his hand, which has visible Amrita crystals.